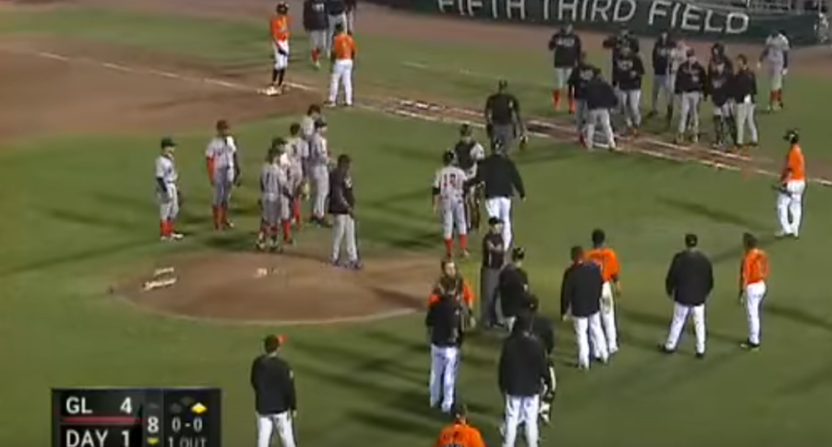 Reds’ prospect Jose Siri, who plays for the Class-A Dayton Dragons, saw his Midwest League-record 39-game hit streak end in unusual fashion Friday against the Great Lakes Loons, with a pitch behind him, benches briefly clearing, an eventual walk on a pitch way outside, and the Dragons’ announcer (which appears to be Tom Nichols, in his tenth year of doing play-by-play for the team on Dayton’s CW) calling it “gutless” and casting aspersions on the whole Dodgers’ organization.

Siri came into the game with hits in 39 straight games, but went 0-for-3 heading into his final at bat, in the eighth inning with Great Lakes leading 4-1. Loons’ pitcher Ryan Moseley promptly threw a pitch behind Siri that he barely avoided, and Nichols went in on him on the air:

“And way behind him! He was trying to hit Siri there and end his hitting streak with a hit batsman! That should call for loud boos! That was a gutless move by Ryan Moseley, and the Los Angeles Dodgers’ organization! They have warned Moseley. That, for the Dodgers, does not speak highly of their coaching staff, led by Jeremy Rodriguez, their pitching coach, Connor McGuiness, or the man on the mound, Ryan Moseley. Fortunately, it didn’t hit Siri. You’d hate to see a hitting streak, not just for the player but for all the fans, end on a hit batsman. Look at that pitch, way behind him. That is just a lack of class and respect for the game.”

Following that, Siri tried to bunt the next pitch and missed. Moseley then threw inside again and almost hit him. Siri then swung and missed on a low slider, then grounded a breaking ball foul. Moseley then threw a third ball high and outside, and threw a fourth one in the dirt way outside for the walk, leading to Nichols going in on him again:

“That was rather ridiculous. To me, it’s a reflection on the Los Angeles Dodgers’ organization, and specifically their coaching staff.”

Siri then said something to Moseley from first, Moseley responded and the benches cleared (around 3:50). Siri eventually got some revenge though; he stole second on the next pitch, went to third on an error, and then stole home on a blocked ball that bounced in front of the plate.

The commentators went on to blast this for a while further, and that’s understandable; they’re calling this for the Dayton audience, who was unquestionably disappointed to see Siri’s streak end this way. Deciding to walk him rather than try and get him out does feel a little weak, as does throwing at him, especially in a game where the Loons already were up 4-1. And there are some criticisms to be had of the Great Lakes coaches, especially considering that another Loons pitcher hit the Dragons’ Cody Thomas the night before after Thomas hit three home runs. But at the same time, it’s not necessarily a “gutless” move by the whole Dodgers’ organization. It did produce an entertaining rant, though.