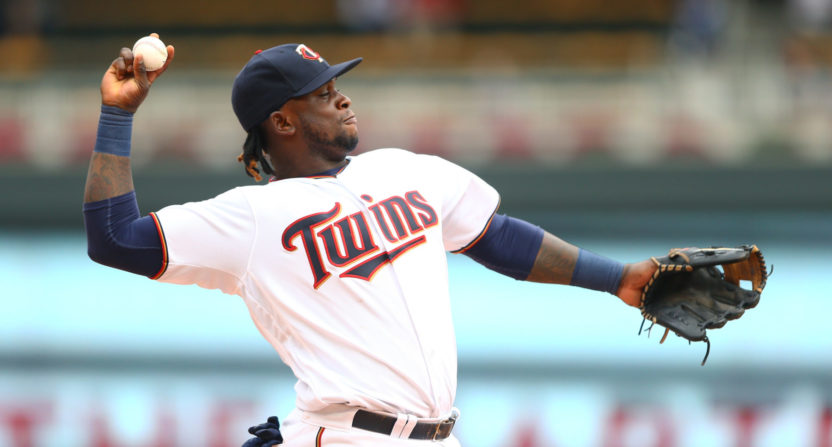 In a lengthy note posted to Twitter on Thursday, a Minnesota-based photographer accused Twins third baseman/designated hitter Miguel Sano of aggressively flirting with her, trying to kiss her and attempting to drag her into a hallway.

Betsy Bissen wrote that her run-in with Sano came at a mall where she was shooting his autograph signing. She claims Sano attempted to flirt with her during the signing, then grabbed her arm and escorted her to another store in the mall. Later, she writes, he repeatedly tried to kiss her and held onto her wrist as she resisted, screamed and called for help. She says he attempted for 10 minutes to pull her through the door to a back hallway.

“Every time I have to hear how great people think Miguel Sano is, I’m reminded of how awful he actually is and how he hurt me,” she wrote.

This is not easy for me to share, but I feel I need to share it. This is my story. #metoo pic.twitter.com/PM6g6YuABf

Bissen also accused the Twins’ first base coach at the time of repeatedly hitting on her.

Twins pitcher Trevor May responded to the note that he was sorry for what Bissen went through, and free agent infielder Trevor Plouffe, who played for the Twins from 2010-16 similarly tweeted that he was “so sorry about this.”

I’m so sorry about this. I understand why you didn’t, but I wish you would have come to me.

Bissen tweeted that the Twins were unaware of her claims about Sano, and as of about 1 p.m. ET on Thursday the team had not issued any sort of statement about the allegations.

UPDATE: The Twins issued a statement saying they were aware of the allegations against Sano but would not comment further right now.

CORRECTION: A previous version of this post misidentified the Twins first base coach Bissen accused of hitting on her. We regret the error.