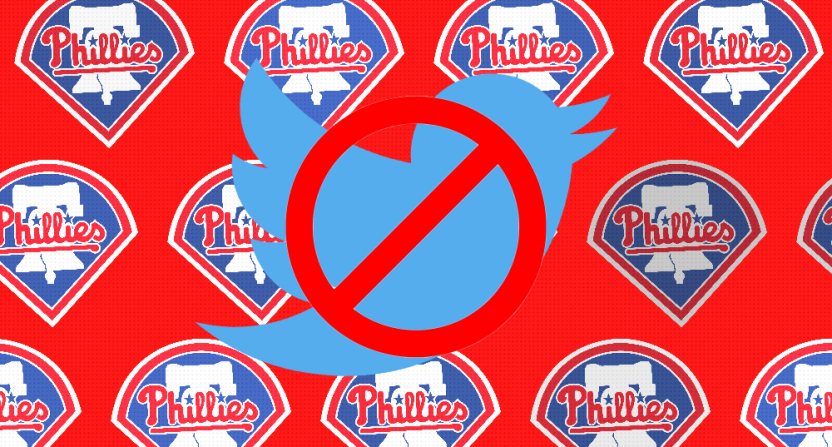 Remember back when Twitter was just starting to catch on and sports teams didn’t quite know what to make of it, so their solution was to try to limit or outright ban journalists from tweeting during practices or games? Well, it looks like that dumb idea is making a comeback with the Philadelphia Phillies. (Update: They’ve since altered course, as detailed below.)

Reminiscent of the time in 2012 when the NCAA put a limit on in-game tweeting, or when Ohio State banned reporters from tweeting during Urban Meyer’s press conferences, or the time the Dallas Cowboys told reporters they weren’t allowed to tweet from practices in 2015, or as recently as 2018 when the NCAA limited journalists to one tweet per inning during a college baseball game, the Phillies are here to remind you that archaic thinking about the way fans consume information in the modern age never goes out of style.

Per 6ABC reporter Dan Patrick, the Phillies announced Tuesday that they were enacting a new policy in which they would revoke the credentials of any journalist who tweeted during an interview or press conference involving their coaches or players. Initially, Patrick said that the new rule involved texting but quickly clarified.

*Breaking* The @Phillies announce they will revoke media credentials for those journalists found to be texting while the manager and players are speaking.

A follow up email sent out by the @Phillies organization clarifies that journalists will have media credentials revoked if "tweeting," not texting, while the manager and players speak. #rtnda @Poynter @espn

Update: Or, apparently not. After a whole lot of backlash, the Phillies reversed course Wednesday morning:

.@phillies
"After some feedback, both internally and externally, the Club will not be enforcing any policy that does not allow tweeting during an interview, either live or taped. We fully understand in the world of social media that timing is sometimes of the utmost importance"

The first question to ask is, “why now?” There doesn’t seem to be a specific answer or a related incident that’s sparked the decision. About the only thing that probably makes sense is that some baseball person decided it was “disrespectful to the game” or some bullshit that baseball people love. That or someone in the Phillies organization is a big fan of the President’s “fake news” mantra.

The second question to ask is, “wait, so just tweeting?” Can a reporter Periscope an interview? Can they post something real quick to Instagram? Or update their Facebook page with a player quote? What if they’re looking at their phone during a presser for longer than three seconds, is that too much?

The third question to ask is, “so why bother?” There may yet be a reason revealed but it’s probably not going to be a good one. Chances are, the Phillies feel emboldened by the arrival of Bryce Harper and the hype surrounding the upcoming Major League Baseball season and want to flex their muscles a bit to keep reporters in line. They probably think this will goose broadcast numbers of wherever they’re broadcasting post-game press conferences, though it’s hard to imagine the difference will be much. All it would really do is delay the transmission of information by a few minutes, which doesn’t really accomplish all that much, other than annoying the people charged with reporting about them and the fans who want to follow the team in real-time.

As you might imagine, the feedback on the new plan has been less than stellar.

I know this is a Phillies thing not a baseball thing but this mentality is why baseball is losing fans. One of the best things about twitter and press conferences is when writers can tweet what’s being said. If I can’t listen or watch that’s my go to.

This doesn't even address "nose deep in your phone". So Phillies reporters are allowed to scroll through their twitter timeline, but not report on news? lol, come on.

So, the @Phillies sign the most high-profile baseball player in the world, those journalists send Tweets or texts out promoting that player for free FOR them during an interview, and get their media credentials revoked? Wow. Maybe media should just stop covering their games. https://t.co/qXNxCFp90O

If we had to guess, we’ll see this policy either get reversed or not enforced at all. There are only so many major newspaper and media outlets you can revoke credentials for before you start wondering where all your coverage just went.