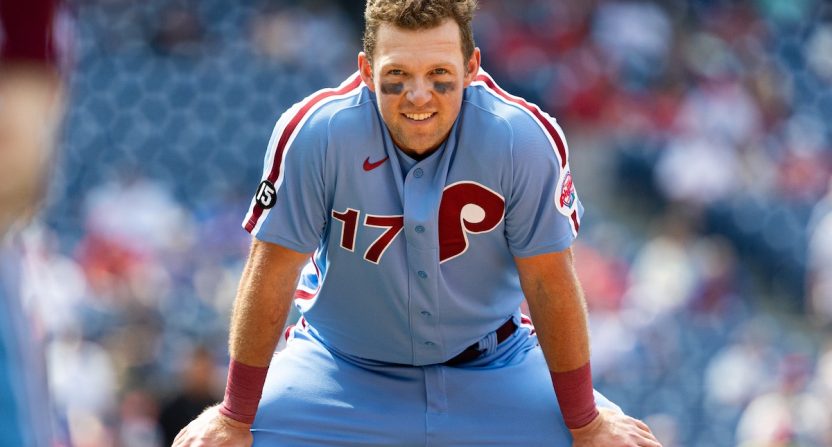 The Philadelphia Phillies beat the New York Mets, 4-2, on Sunday, but that probably won’t ease the heat currently directed at the team by fans and media. The Phillies go into Monday’s play with a 36-39 record, tied for third in the disappointing NL East and five games behind the Mets.

Manager Joe Girardi is certainly feeling more pressure, facing increased scrutiny from the press corps covering the Phillies. One might guess Girardi developed a thick armor after 10 years with the New York Yankees. But those defenses may also have eroded during his decade in the Bronx.

Speaking of defense, the lack of it has been a major problem for the Phillies. One of the worst culprits is first baseman Rhys Hoskins, whose ninth-inning error in Saturday’s game allowed the Mets’ Travis Blankenhorn to reach base.

Blankenhorn eventually scored the tying run, resulting in Philadelphia’s 19th blown save of the season. (Yes, that leads the majors!) Two batters later, a sacrifice fly from Michael Conforto scored Billy McKinney for a Mets walk-off win. It was the Phillies’ fifth loss in their past six games, eighth in their past 11.

After Saturday’s loss, Girardi defended himself and his team to reporters. The manager’s decision-making has been criticized, but Girardi said so many choices have to be made during a game that they won’t all work out. Then he explained that the Phillies’ pitching issues — particularly with their bullpen — can be attributed to poor defense.

“A lot of our mistakes the last few days have been defense,” Girardi said. “So, I mean, you can put it on the bullpen, but it’s been the defense. Every crucial inning we’ve had an error that’s led to runs. Runs lead to extra pitches for pitchers. Pitchers don’t go as deep. Bullpen guys can’t go as often. “

When it was Hoskins’ turn to be interviewed, he acknowledged that poor defense cost the Phillies during the past two games and should be covered. Then, the five-year major leaguer told the media what they should also be writing about.

From the Philadelphia Inquirer:

“But don’t forget to write about the great things today. Eflin outdueled deGrom in maybe the biggest game of the year, right? A game that we knew we had to win.

“Don’t forget to write about the really, really good things that went on today as well. Because I really think that this is a really good team. The ball is not really bouncing our way. We’re not getting calls. Sure, we’re 75-80 games in, but there’s a lot of baseball to be played.”

That’s not a quote that will likely go over well with fans. Reporters and commentators probably won’t like it either, since highlighting a good pitching performance in a loss doesn’t tell the story. And some in the media have already pointed out that “don’t forget to write about the great things” sums up the mindset of a team that hasn’t performed to expectations. “Hey, we lost, but Bryce Harper hit a home run, guys!”

Understandably, Hoskins wants critics to look at the positive too. And for a player, that’s surely important when more than half the season remains to be played and MLB hasn’t even reached its All-Star break.

But this is the line of thinking that believes media is a public relations arm of a sports team. Sure, game stories and columns should look at the bigger picture. But it’s not the media’s job to accentuate the positive when the negative explains why a team is losing ballgames. Highlighting the poor defense and relief pitching that’s hurting the Phillies tells the story, not Zach Elfin allowing one run and five hits over six innings — even if that is a notable performance.