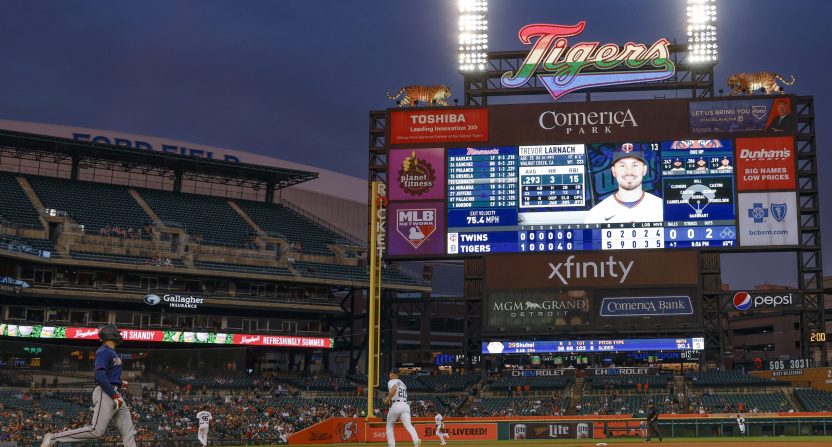 NBC announced today that for the holiday weekend broadcast of MLB Sunday Leadoff on Peacock, there won’t be a traditional broadcast booth.

Of course, Peacock’s booth hasn’t really been traditional all year, with Jason Benetti calling games alongside a constantly rotating cast of analysts every week. But this will be non-traditional even by Peacock’s standards, with the booth getting the holiday weekend off in favor of what sounds like a very different approach to calling a game.

According to the release, the streaming broadcast of the Tigers and Royals in Detroit will feature a sort of roving tour of the stadium.

“This is another way to take you out to the ball game and give the fans a unique experience,” said Sam Flood, NBC Sports Production Executive Producer & President. “We’re going to be fans of the game, taking you to different parts of the ballpark and engaging in a way that fans watch the game in the stadium.”

NBC promises the presentation will include a quasi-stadium tour, enhanced audio, unique camera positions, and conversations with guests and Detroit superfans.

It’s an interesting experiment, and it’s a solid place for it. It makes sense for streamers to take chances on a different presentation setup; Apple TV has done it as well, with some things working better than others. MLB’s sheer volume of games encourages experimentation like this; it’s the same reason late night shows end up experimenting in different ways. (There have been multiple broadcasts from the bleachers at Wrigley Field, for example.)

The downside, of course, is a potentially incoherent mess of a broadcast. As long as they find a balance between showing enough of the actual action but doing so in a different way, sure, it could be fun.

This experiment made me wonder about the potential for doing a game with a more traditional broadcast, but without announcers. Just pure, ambient crowd and stadium noise. Baseball would lend itself well to that (golf, too, especially if we could get player-caddie conversations in their entirety), as so much of the action is right in front of the viewer, and fairly self-explanatory. That’s not to say good broadcasters don’t add to the experience; it’s just the opposite, in fact. But having it as a push-button option would be fascinating.

If you’re curious how this will all come together, coverage begins at noon Eastern this Sunday, July 3rd.