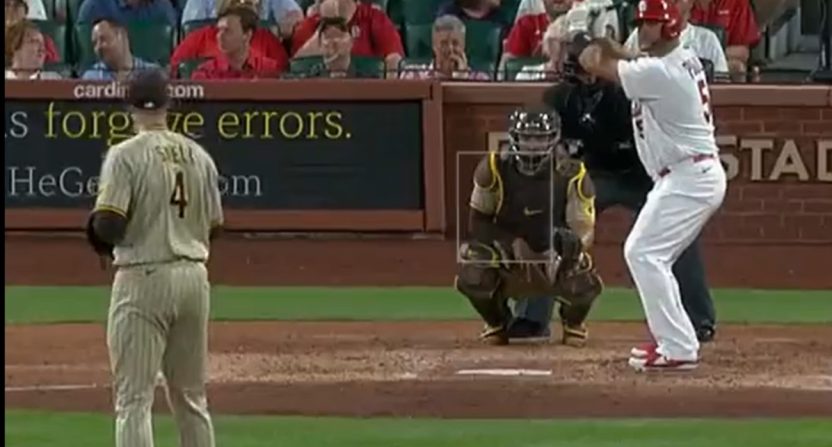 Hot mic, two words every broadcaster hopes to avoid seeing in a headline next to their name. Luckily for San Diego Padres broadcaster Bob Scanlan, as far as hot mic gaffes go, this one wasn’t too bad.

Monday night, the Padres had play-by-play voice Don Orsillo and analyst Mark Grant on the call of their game against the St. Louis Cardinals for Bally Sports San Diego, with Scanlan joining the broadcast from the field. During the fourth inning, Padres pitcher Blake Snell threw a fastball that was fouled off home plate umpire Chris Segal. As Orsillo was narrating the action, Scanlan’s voice could be heard unexpectedly chiming in with what appeared to be a criticism of Snell.

“He gets scared of his fastball,” Scanlan said, as he began to talk over Orsillo. A big no-no in the broadcasting world. “I never know what he’s trying to do to be honest with you. I don’t know that he does half the time.”

And if you weren’t sure whether Scanlan intended for his commentary to air on Bally Sports San Diego, Orsillo’s response appeared to confirm that it was accidental. Orsillo completely sidestepped Scanlan and said “Segal appears to be OK…says he’s good to go.” That was followed by 20 seconds of complete silence on the broadcast and you can almost guarantee there was off-mic chatter about Scanlan’s blunder during the lull.

It certainly wasn’t kind analysis from Scanlan, a former Major League Baseball pitcher himself. But it also wasn’t something deserving of reprimand either.

It was a rough game overall for Scanlan, however. He took a foul ball off his head less than an hour before the hot mic mistake. “It caromed around, it hit like three different walls and then it struck me in the side of the head,” Scanlan said. “Hey, some of the hazards, we’re down here to play some hardball.”

Ball that just smoked me in the side of the head landed perfectly on top of my bag. Will find some youngster to give ball to. No kid, that sticky stuff on it is not Spidertack, just a little hair gel. GO PADS!!! pic.twitter.com/GbXSnnntSv

It’s good Scanlan survived both incidents without any serious harm. Either one could have led to much worse consequences.