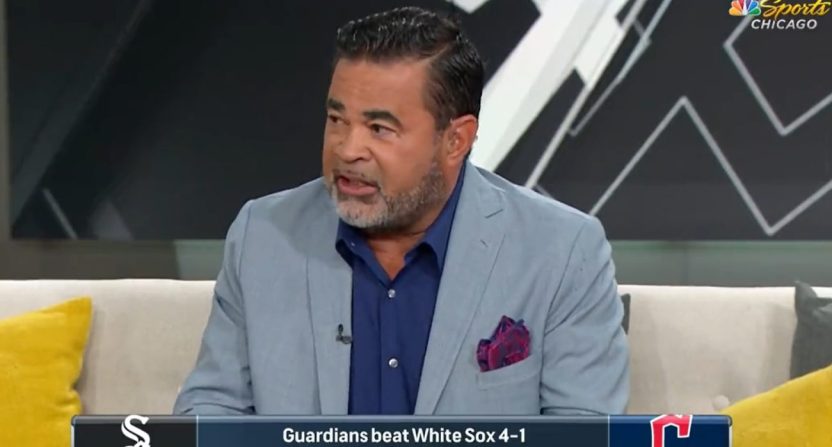 This story stems from Guillén, who is now an analyst on NBC Sports Chicago, calling White Sox manager Tony La Russa “Rick Renteria with credentials” during a recent postgame show. The Chicago White Sox have massively underachieved this season, led by La Russa, who has been routinely criticized for making head-scratching decisions.

Following Guillén’s criticism of La Russa and his uncalled for shot at Renteria, Jon Heyman of The New York Post and MLB Network tweeted that the NBC Sports Chicago analyst might be trying to get his old job back. Guillén managed the White Sox from 2004-2011, winning a World Series during his second season with the club. The comment by Heyman seemed to have irked Guillén, because he responded on Twitter by challenging the baseball insider to a charity boxing match.

My wife will be mad but tired of this liar talking about me. Your a jelous man that me with shit English do the job you do. All you do is lie about stories. I get paid to talk baseball just like you. I said I love Tony but I gave my opinion and he know how I feel. You always hate https://t.co/YpmksSBngv

Hate me why? Because of bad English? Because I won? Am loud? Good looking? Rich? I don't need to insult anyone to get a job. Maybe you think I do. Tired you putting me down. Maybe you think you can because your privilege and I am not?

I have always defended Tony because I love the guy in many ways. So don't talk shit without knowing who I talk to and what I say. My wife will be piss and I have changed but you asked for it. You clown. You will never be better then anything you do in life including tv. Payaso

Jon you hate me and always bad mouth me. Let's settle it. Let's raise money Jon me and you the ring. Whatever money we raise goes to charity. I am not perfect, but tired you hiding behind you a writer.

According to Guillén, it wasn’t just about the allegation that he wants La Russa’s job. The former manager feels Heyman has been overly critical of him throughout the years. But as they went back and forth on Twitter, Guillén also called into Chicago’s 670 The Score to rant about Heyman and reaffirm his desire to engage in the ring.

“When somebody calls me up and says, ‘I talk about Tony La Russa because I want to have a manager’s job,’ it’s wrong,” Guillen told 670 The Score hosts Dan Bernstein, Laurence Holmes and Leila Rahimi. “I’m not. I have a great job. I’m having fun with the job. I will be the last person to talk about Tony La Russa in the wrong way. Tony is my mentor. Tony is my hero. Tony is the guy I look toward every day of my life when I was managing.”

That’s the second person that was dragged into this spat unexpectedly. First, Rick Renteria, who was sitting at home minding his business before everyone deemed it an insult that Tony LaRusso would be compared to him. And now, Jay Mariotti. Guillén and Mariotti had an infamously rocky relationship while the former was with the White Sox and the latter was writing for The Chicago Sun-Times, but I could not find any instance where one challenged the other to a charity boxing match.

Between Guillén vs La Russa, Guillén vs Renteria, Guillén vs Mariotti, Guillén vs Heyman, all the tweets and quotes from 670 The Score, there’s A LOT to unpack here. But one thing is clear: there will be no charity boxing match.