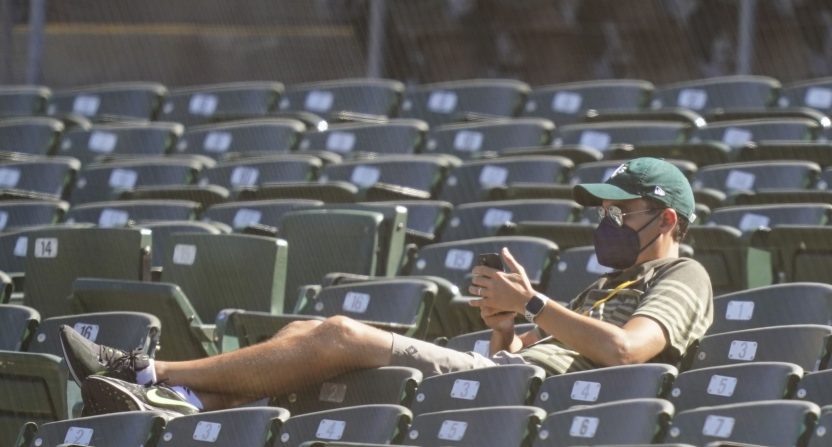 If the Oakland A’s organization is looking to generate sympathy and compassion for itself as it attempts to convince taxpayers to chip in for a new ballpark, team president Dave Kaval’s current strategy does not appear to be working.

While Kaval’s tenure atop the team started well enough and led to some positive initiatives early on, many local fans have turned on him and the franchise as it has made its way on the long, painful, inevitable process that appears to end with the team becoming the third professional sports franchise to leave Oakland in the last few years.

As their protracted efforts to convince lawmakers and taxpayers to help fund a waterfront ballpark project have carried on over the years, coupled with rising ticket prices, opening flirtations with Las Vegas (with some help from MLB), perceived mistreatment of legendary players, and the franchise’s inability to field a competitive roster for a discernable amount of time, fans have stopped showing up at RingCentral Coliseum (though plenty of cats remain).

The A’s are looking at a season with record-low attendance numbers as they average less than 8,000 fans per game, the lowest in Major League Baseball by a mile.

Given the negative coverage that Oakland has been receiving in recent days over the situation, it’s understandable that Kaval would be privately miffed about the situation. However, when the A’s and San Francisco Giants started the Bay Bridge Series on Tuesday at Oracle Park, Kaval launched into a very public Twitter tirade, calling out the low attendance for a Giants home game. He notably tagged the SF Chronicle’s John Shea, Ann Killion, and Scott Ostler in one tweet, presumably given their coverage of Oakland’s attendance woes.

Stay strong. I wonder if the SF media is going to comment on the sparse attendance? ? @JohnSheaHey @annkillion @scottostler https://t.co/S0sk5Bu6lt

Wait… so the visiting team fans are supposed to fill the home ballpark? Interesting ? https://t.co/nzDrjXlUmY

And you are literally a seagull. https://t.co/JdebpYM38L

Defintely a very normal and good use of his time.

It’s also worth noting that the Giants are currently averaging a little north of 32,000 fans per home game. Kaval also doesn’t bring up the fact that one reason attendance might have been low for the series was the fact that the A’s were the opponent in question.

It’s possible that the reason Kaval was so worked up and needed to “tweet through it” is that he recently took part in a Twitter spat with Damon Bruce, co-host of Damon & Ratto on 95.7 The Game, that initially began because of Kaval’s comments about how local media favor San Francisco over Oakland.

So true. This is another reason it is so damaging that Oakland and the East bay lack any dedicated media. Everything focused on SF https://t.co/4upjdNA1HA

The Oakland Tribune has been swallowed by Media News Group, a front for a multi billion dollar hedge fund: Alden Global Capital. Not exactly a group that cares much for Oakland… https://t.co/X7Ro3B9J1T

That’s when Bruce chimed in to throw some cold water on Kaval’s assessment.

What complete nonsense. Media News Group controls over 100 publications around the world. (This isn’t a debate about who controls journalism) They’re not “a front” for anti-Oakland anything. Dave’s talking points are Trumpian. Yelling “fake or unfair” news? It’s pathetic. https://t.co/yptHiygEyK

Kaval responded and that kicked off a back-and-forth over the perceived imbalance in local media coverage, specifically when it comes to attendance issues between the A’s and Giants.

“Audacy” (spell it right Dave, details matter) has never told me to focus or NOT focus on a single subject. Not ever. Not once. Ray & I HAVE discussed empty seats around MLB. They’ve got dips. You’ve got intentional fan suppression at your owner’s direction. THAT’S A STORY.

Naturally, we eventually reached the point where Bruce extended an invitation onto his show so he and Kaval could have it out in real-time.

I’ll offer this one last time @DaveKaval. Join me on the air, 4:00 this Friday for a respectful discussion of how you’re treating your current fans.

My billion dollar corporate owner has approved your appearance.

Kaval upped the ante, saying that he wanted the debate to be held at the Coliseum and aired live on Twitter.

Twitter televised debate! You in? Let's not limit the audience! Let all the people see it. Coliseum this Friday. You in? https://t.co/BR69TI5LmV

Then it became something of a charity-off after Bruce said he would donate his appearance fee.

I have a $5K appearance fee that I’ll be happy to donate to Oakland Food Bank. Meet my fee & charitable donation. and sure, we’ll do it at an agreed upon time anywhere you want. Otherwise, we’ll do it when I’m at work on Friday. https://t.co/Pk6sVpVcLv

Done ✔️4:00pm Friday Televised Twitter Debate at the Coliseum. Happy to make $5,000 donation to Alameda Food Bank for each of us. ??? https://t.co/AfERnBp2pv

While it was a bit unclear if this Twitter handshake deal was official, Kaval ended the conversation by saying it’s happening on Friday, though the time remained TBD.

Meanwhile, Bruce’s final tweet on the matter seems to say that the ball is in Kaval’s court to make it happen.

Lots of fans emotions hit the timeline this morning.

Hope even the “haters” will see all that turned into $10K @DaveKaval & @Athletics pledged to the Alameda Food Bank, to book me on his Twitter TV Show. Whatever & whenever that is?

What’s mostly unclear is what Kaval hopes to gain with the debate. It’s hard to imagine he’ll win any hearts and minds in a heated discussion when anyone can just point to numbers and facts. But then again, his Tuesday tweet tirade seems to imply that he’s not worried about either of those things.