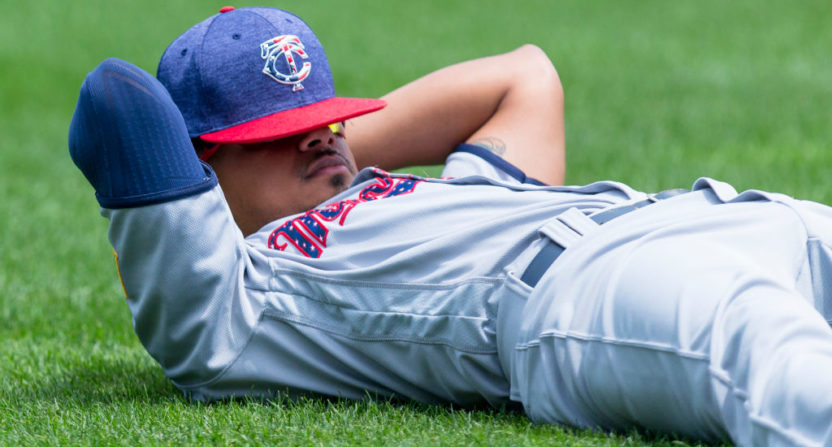 Time zones typically create an interesting situation for the North American sports fan. If you’re on the east coast, games start later and potentially push your sleep schedule back further. If you’re on the west coast, good luck sleeping in when there’s a game you really want to watch on the east coast. If you’re somewhere in the middle, you get benefits from either side – games end earlier, start later, but not *too* early or *too* late.

We polled on Twitter followers, who showed a clear lack of east coast bias, favoring the Central Time Zone.

Poll time- What's the most optimal time zone if you're an across the board general sports fan?

We also polled a number of our staffers, and here’s what they had to say.

Andrew Bucholtz: I’m going to go against the grain and say Eastern. Most of my life’s been in Pacific, but my college years were in Eastern, and I love the sports experience there. I love it for early weekend starts, like European soccer, College GameDay, and overseas NFL, all of which happen before much of North America wakes up. On Eastern Time, you can even watch those games in a bar, something that’s quite hard to do out west. I love it for weekday nights, where the games don’t start until you come home from work or school. And I love it for when you’re out with friends and watching live sports on TV at midnight instead of highlights shows, or doing the same in your own house.

Eastern Time is also ideal for following the sports news cycle; things happen when you wake up, not three hours before then. Granted, I’m a night owl, so what works for me doesn’t work for everyone (as demonstrated by our poll), but I’d take Eastern Time over any of the others here.

Phillip Bupp: While I would love to live on the west coast, watching European soccer at 4:30 and 7 AM every week just sounds terrible. In some ways, the Pacific is best because the NFL games end by 3 PM and even the latest game ends around 8 or 9 PM. The Eastern is just the opposite and results in late nights (especially during the week) so neither are ideal. I really loved the Central Time Zone because it seems like it has the best of both worlds. Most European soccer games start at 9 AM, so you aren’t missing too much there, and that extra hour is valuable when it comes to primetime games running late. Not many would choose the Central, but it seems like the most underrated and the best.

Matt Clapp: I’ve lived for multiple years in every time zone, and adding everything up, would say Mountain is probably the most convenient time zone.

As I’ve learned over the last two years, there are big pluses and minuses to Pacific time. College football games starting at 9 AM and NFL games starting at 10 AM is just a bit too much for a night owl like myself. Every weekend I watch those games incredibly groggy. It also eliminates/greatly lessens the chance to have a beverage while you watch the game when it’s that early, and if you wanted/need to go to a bar to watch games? You’re talking about leaving your house before 9 AM to go to the bar. Now, I like that east coast baseball, basketball, and hockey games start as early as 4 PM Pacific time, and the latest games are over before 10-11 PM. But if I had a 9-to-5 job like a normal person and had a lengthy commute, those early evening starts would suck. Like, many playoff baseball games are early over or already well underway by the time many people on the west coast get home from work.

Mountain time has 6 PM starts for primetime football games or World Series baseball games. That just feels right, and is perfectly timed for people that have work end at 5 PM. NFL morning games start at 11 AM and the afternoon games start at 2 PM. Again, this just feels right. The late baseball/basketball/hockey games start at 8 PM, which isn’t too late. When you balance everything out, Mountain just seems to be the most optimal time.

Also, it blows my mind that Eastern Time even got 13% in our Twitter poll. I take it these people also do not have 9-to-5 jobs.

Ken Fang: Most big events like the Super Bowl, World Series and others are programmed for the East Coast, but even so, it’s best to watch from the Western half of the country.

Having lived in the East for all of my life, there’s the disadvantage of those late night Mountain Time and West Coast games. While I stay up late doing the Viewing Picks and other features, I often find myself dozing off. I wake up either when the game is over or when the postgame show is on.

There have been instances where I’ve traveled West and been able to watch a Monday Night Football game or the late NCAA Tournament game and not had to worry about falling asleep.

The Mountain and Pacific time zones are ideal for watching sports. You can watch the full Sunday NFL slate from beginning to end (provided there’s no London game) and still be able to go out for dinner.

In addition, being on the West Coast lends to better viewing of the Australian Open and Australian Rules Football as they’ll begin either in the late afternoon or at night.

The East does have its advantages for certain events, but in order to get the whole sports viewing experience, I feel the West is where it’s at.

Ben Koo: This really boils down to when do you want to be inconvenienced? Late at night? Coming home from work? Waking up early for football? I’m on the west coast now, but in a few weeks will be moving to the eastern time zone. The west coast more or less works for me, although some of the early kickoffs for football can be problematic from time to time. I haven’t watched College GameDay in years. Also, having games involving your teams across NCAABB, NBA, NHL, and MLB playing a game on the east coast often means you’re still at work or in traffic when weeknight games start.

As much as I am a night owl, the idea of having to be up past 1 AM a dozen or so nights a month sounds like a bit of pain in the ass so that rules out Eastern Time Zone. Central Time Zone is appealing, but I’ll give the nod to Mountain Time Zone, which gives you a bit more cushion to catch a game after work so you don’t get home at halftime. The extra hour on the weekends so you can avoid 9 AM and 10 AM kickoff times on the west coast, would also be a nice perk.

While Mountain Time Zone didn’t win our poll, I think for my preferences, it’s definitely the most ideal place to be as a general sports fan.

Joe Lucia: I lived my entire life in the Eastern Time Zone…until August, when I moved to the Pacific Time Zone and went from one sports extreme to another. I really enjoy the Pacific in nearly every facet…except when it comes to weekend soccer, which is absolutely awful. I’ve woken up at 4 AM twice since I’ve been here to watch soccer, and generally wake up before 7 AM on every Saturday. That’s not all that fun, especially considering that’s when I’m up during the week for work.

But the NFL’s early window starting at 10 AM is awesome, and if you don’t care about the late afternoon window, your NFL gameday is done by 2 PM, and you still have a fair chunk of your day left. Also, as the fan of an east coast MLB team and a Big Ten university, those games start and end even earlier, allowing me to still have a chunk of my day left when those games are out of the way.

I’m giving the nod to the Pacific Time Zone, but I am also reserving the right to change my mind if I move to either the Central or Mountain time zones.

Alex Putterman: With all due respect to the Mountain Time Zone, the answer here is Central. It’s the only time zone where just about every event starts at the time most people are watching TV. Games on the East Coast start late enough that anyone who works until 5 or even 6 p.m. can be home in time for most of the action, and games on the West Coast start early enough that you’re not necessarily in bed by halftime. On the weekends, you have time to wake up, stretch your legs, and have breakfast before football starts. And best of all, those nationally broadcast primetime events that seek to please everyone land for you right at 7 or 7:30 PM. As networks attempt to balance the needs of the two coasts, it’s Middle America that benefits most.

Jay Rigdon: I’ve spent most of my life in the Eastern Time Zone, but thanks to Indiana’s weird reluctance to observe Daylight Savings Time for my first few decades, I also got a taste of Central Time television hours for a decent portion of the year. And I’ve also lived in Denver, giving me a bit of Mountain Time, while visiting my girlfriend’s family in Orange County has allowed me some experience with Pacific Time as well.

Having written all that, and having thought about it, I think I’d rank them with Mountain on top, then Pacific, then Eastern, and finally Central. I’m not a morning person, at all, so the earlier start time for evening games wasn’t a big advantage for me in Colorado, but what I did enjoy most was the flexibility that time zone afforded me. Saturday and Sunday football, soccer, and golf all started and finished early enough that I was generally able to spend my afternoons and evenings doing, well, Denver-ish things. (Which for me involved going grocery shopping during Broncos games. Or doing anything during Broncos games. It was a ghost town.)

Mountain is a solid compromise; 8 PM Eastern starts could go four hours or more and I’d still be able to go to bed before 10, and I could still stay up for West Coast NBA or college football without dragging too much the next morning. But working 8-5 local time, I’d still be able to get home in time for those starts, whereas Pacific time residents leaving work at 5 are likely to miss out on the beginning. And I had a bit of that too; 7 PM Eastern college basketball tips were always a struggle for me, but DVR helped, and there weren’t that many of them.

Now that I’m back in the Eastern Time Zone, I definitely miss Mountain time, and that’s probably the best evidence I can offer.