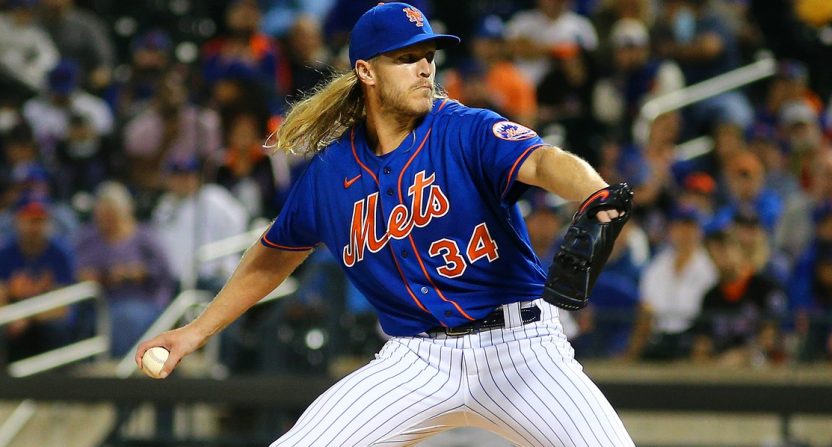 Noah Syndergaard is doing what has to feel good to do as an MLB player: leave the Mets.

Syndergaard took a one-year offer from the Angels yesterday that beat the Mets qualifying offer by a few million. That ends his time in New York, where he’s spent his entire professional career. It also means that it’s time for the more predictable members of New York media to start trashing him on his way out.

Like, say, Mike Francesa! Here he was yesterday, taking a shot at Syndergaard’s health, which is always a fun and classy thing to do if you’re in sports media.

The Mets are better off without Syndergaard. In case you haven't noticed, they have been without him for years.

He didn’t stop there yesterday, either:

FBI thought he was dead too. Might take a while

Today, Francesa climbed back on the tweeting horse, at 6 AM no less.

I competed every day for 35 years (and won) in my chosen profession in the greatest city in the world. Noah whined and ran away.

Only thing you've ever won is being a gas-bag Mets hating opportunist. All you've done is talk shit and spread toxic crap for a career. Congrats again sweetie, you're doing great.

Syndergaard continued the (warranted) trolling by retweeting this video about his new teammate, Shohei Ohtani, that brings back a brutal Francesa take from spring training 2018.

Shohei Ohtani, how it started vs how it's going: pic.twitter.com/PuDh5hXwie

Obviously Van Gundy was agreeing with Draymond, though that agreement was misinterpreted:

We’ll have to see if Francesa decides to let this one go or if he tries one more time before the weekend is out.