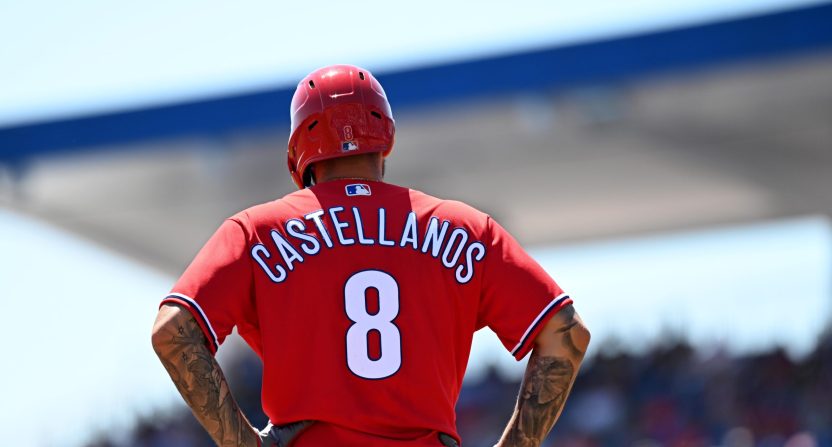 If you’re going to make a somber announcement during a Nick Castellanos at-bat, please know that he will be aware that you are doing it and he will ruin it. This is science now.

That has to be the case because Castellanos just punctuated what was meant to be a reflective moment of honesty and humility with a base hit for the third time in three years. At this point, if you’re a broadcaster launching into an apology when Nick is batting, this is on you.

Sunday, Castellanos stepped to the plate for his new team, the Philadelphia Phillies, in a spring training contest against the Toronto Blue Jays. Buck Martinez was on the call for Toronto and when the camera panned over to the Blue Jays’ coaches, he took note of pitching coach Pete Walker, who had been arrested on Friday for driving under the influence. He was released on bond the same day.

As the camera lingered on Walker, Martinez started discussing Jays’ manager Charlie Montoyo’s quote on the incident. All the while, Castellanos’ at-bat progressed.

“He said the Blue Jays and I are aware of what happened,” said Martinez. “The incident involving Pete Walker. But we’re still gathering information. Out of respect for the process, that’s all we’re going to say right now. And the Blue Jays as an organization have taken the same path, so, unfortunately, a very significant with Pete Walker. A very highly respected pitching coach. The Blue Jays and the organization are going to wait until all the information is gathered. So he is continuing to serve as the pitching coach and he’s been here today watching these Blue Jays pitchers, so far three pitchers today, and we’re scheduled to see Thomas Hatch, Julian Merryweather, and maybe Anthony Castro throughout the course of this game…”

And that’s when Castellanos punctuated the apology reading by blooping a single into shallow right-field to remind everyone that when there’s bad news to be read out loud, he will always be there to make things slightly more awkward.

Of course, this moment pales in comparison to the epic home run he hit during Thom Brennaman’s apology for saying a homophobic slur on a hot mic. That surreal moment became an iconic internet meme that will seemingly live on for all time.

But what really cemented Castellanos’ role as the ruined of on-air somber moments was his home run during Bally Sports Kansas City broadcaster Ryan Lefebvre’s eulogy of George A. Gorman, the father of longtime Royals equipment manager Pat Gorman, who had recently passed away.

It is so known that Castellanos will ruin any genuine moment of humanity happening during his at-bat, a minor league announcer who was eulogizing his uncle during a game last year said that he hoped “we don’t get Nick Castellanos’d and someone hits a home run to tie the game right now” right before that happened. As if he invoked Nick’s unholy wrath from afar.

Thanks for the moment, Uncle Charlie. Love you. pic.twitter.com/yfRiPHMao6

The lesson is, as always, that no matter who he plays for, no matter what transgression has occurred, and no matter who has died, Nick Castellanos will always be there to take your very serious moment and turn it on its head by hitting a ball with a stick while you discuss it.

And, look, the people love it and they demand more of it.

He’s gotta be in on the bit, there’s no other explanation https://t.co/aTW27dDVa3

why are we letting nick castellanos play baseball while there's an active war in europe https://t.co/qIkCtzP1Ml