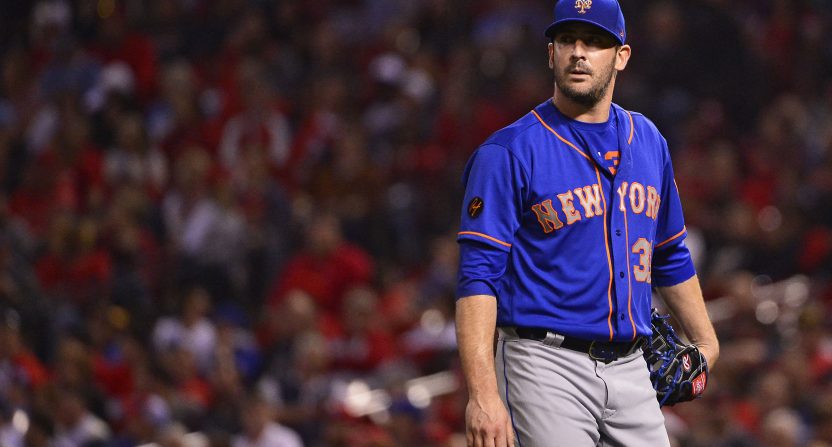 As New York Mets pitcher Matt Harvey’s career has headed south, so has his apparent relationship with the media that covers him. Last week, following the announcement that he was being shunted to the bullpen, Harvey told reporters there was “no chance” he would speak to them because, in his words, “I don’t fucking want to.”

Harvey’s latest outburst toward media members was justifiably criticized as rude and inconsiderate. Speaking to reporters is part of a pro athlete’s job, and many people felt it was unfair of the pitcher to take out his frustration on reporters doing their jobs.

But mere days after that incident, the New York Post offered a prime example of why star players like Harvey often don’t trust the media and feel little obligation to cater to it. On Monday, the Post‘s “Page Six” gossip section published a story headlined “Matt Harvey partied in L.A. night before wobbly game.” The teaser text as displayed on social media alluded to Harvey “stumbling around,” and Post employees played up that aspect of the story.

Except that, according to someone quoted in the Post who witnessed Harvey’s night out, the pitcher was sober, making any reference to him stumbling more than a bit misleading.

EXCLUSIVE: Matt Harvey was seen “stumbling around” at a party in LA the night before a rough game, sources tell @PageSix https://t.co/gklgxplo6t

Page Six, of course, is separate from the Post‘s sports section and has little to do with the reporters who cover the Mets on a daily basis. Maybe Harvey should be able to differentiate. But ultimately, many people, including athletes, view the media as The Media and don’t have much time to separate Page Six from the back page.

From Harvey’s perspective, it’s The Media that has chased him around New York his whole career, reporting on his private life, and The Media that approaches his locker to ask tough questions after bad games. Maybe that’s not fair to the beat reporters, but it’s reality.

The truth is, Harvey has been covered differently from about 98 percent of baseball players. When he goes out and gets drunk, it’s news. When he breaks up with his girlfriend, it’s news. When his (ex-)girlfriend finds a new partner, it’s news. In some ways, Harvey has embraced celebrity and asked for his life to be scrutinized, but in other ways he has gotten a raw deal from the New York media, and it’s understandable that he instinctively runs away from anyone with a notebook and a recorder.

Harvey will be a free agent after this season, and given his 5.76 ERA, he might not even last the season with the Mets. One way or another, he’ll almost certainly be playing somewhere else a year from now. Hopefully, his relationship with the media in his next city is a bit less adversarial — on both sides.