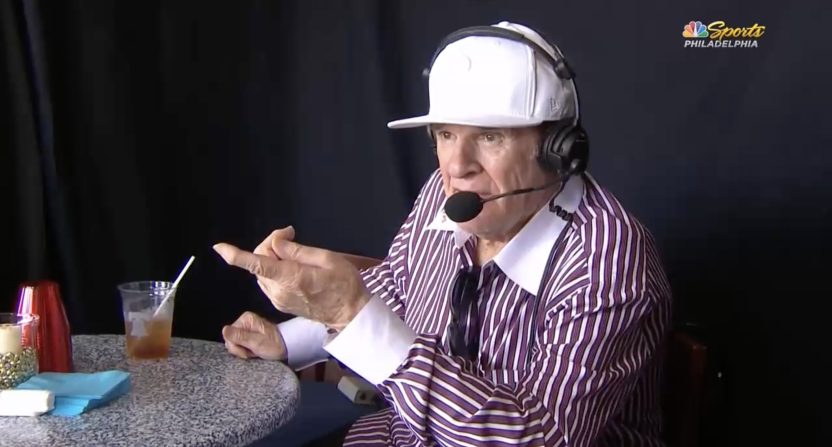 According to Rob Tornoe of The Philadelphia Inquirer, Rose’s expletive-laden appearance in the broadcast booth was removed from NBC Sports Philadelphia’s replay of Sunday’s Phillies–Washington Nationals matchup.

Sunday afternoon, the Phillies celebrated the 40th anniversary of their 1980 World Series Championship team following a two-year delay of the event due to the COVID-19 pandemic. Throughout the game, the NBC Sports Philadelphia broadcast welcomed members of the team into the booth to join play-by-play voice Tom McCarthy and analyst John Kruk.

Rose’s turn came in the bottom of the fifth inning and lasted through the sixth. During his appearance, MLB’s all-time hits leader asked if the broadcast was an “X-rated show,” described a “cock-high fastball,” said “horseshit,” “no shit,” and “son of a bitch.”

None of that was heard during the game’s replay broadcast, however. Instead, Rose’s appearance in the booth was replaced by a graphic that said, “Due to time constraints we now move ahead in the following program.” The encore broadcast skipped over the entire sixth inning and resumed in the seventh.

Cutting the original broadcast is not uncommon, RSN’s often edit their replay broadcasts to fit a two-hour window, and innings that featured zero runs scored are easiest to erase. Earlier this season, NBC Sports Chicago did the same thing with a White Sox broadcast, cutting an inning that featured its announcers reacting to a couple of controversial calls and managerial decisions. The network similarly blamed time constraints after the broadcasters’ reactions were erased from the encore presentation.

Maybe NBC Sports Philadelphia really did only cut Rose from its replay broadcast because there were no runs that inning, but it was also interesting to see the appearance get eliminated after the network received backlash for putting him in the booth. Profanity aside, Rose’s attendance got off to a brutal start after he dismissed a female reporter earlier in the day

Prior to the game, Philadelphia Inquirer reporter Alex Coffey asked Rose if his presence at the 40th anniversary celebration sent a negative message to women. The question was in relation to Rose being accused of having a sexual relationship with an underage female in the 1970s, allegations that caused Fox Sports to dismiss Rose from their MLB studio show in 2017.

“Sorry about that. It was 55 years ago, babe,” Rose responded to Coffey.

The response from Rose caused many to criticize the Phillies for inviting him to the celebration and NBC Sports Philadelphia didn’t help by making the even more curious decision to put him in the booth. The network surely heard the backlash, whether that influenced their decision to erase his appearance from the encore broadcast, we’re not sure. Regardless, fans weren’t able to witness Rose in the booth during the replay.