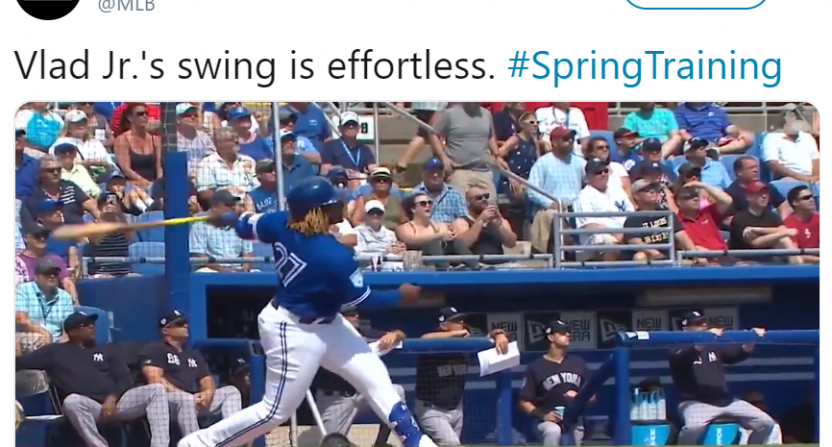 Spring training is ongoing, so while the weather for a large swath of the country is still very much winter (here in Indiana, the windchill will peak at around 5 degrees tomorrow), baseball is somehow just around the corner.

Now that Manny Machado and Bryce Harper are both signed, we can turn our attention to the ways in which baseball’s collective bargaining agreement puts the screws to the players on the other end of the free agency timeline: service time manipulations designed to keep a player from free agency for an extra year. The debate was perhaps most famously publicized when the Cubs didn’t start Kris Bryant in the majors in 2015, despite contending aspirations and Bryant clearly being ready.

Love the Kris Bryant debate as it reminds me of the joy I felt as a child reading my favorite Matt Christopher book: pic.twitter.com/nIMg6qdG3e

Since then, the combination of a general (and warranted) shift in sympathies towards players and the ongoing and obvious debate around the depression of free agent prices has served to highlight how poorly minor league players are treated. Because as we’re asked to accept the idea that all 30 teams are trying to win and maximizing all the resources available to them to do so (they’re not), we also see teams go without their best players every spring in order to gain an extra year down the line.

This spring has another obvious case: the Jays and their handling of Vladimir Guerrero Jr. Vlad Jr. is pretty clearly big-league ready, by all accounts. He was Keith Law’s #2 ranked prospect in all of baseball this winter, coming off a season slashing .336/.414/.564 in AAA as a 19-year-old. (He also played 61 games in AA, where he hit .406. He’s a monster.) Despite this, he didn’t make a September appearance, and the Jays have already said he’s not going to start the year in the majors.

Jays GM Ross Atkins said he doesn’t think he’s a major league player, though it was a radio interview so we can’t be sure whether or not he managed to keep a straight face.

This is clearly an attempt to cover their ass from a potential grievance, although any challenge is hurt by the fact that Vlad Jr., like all players who haven’t been on a big league roster, is ineligible for MLBPA membership. The whole thing is sort of undercut, however, by the fact that the MLB Twitter account spends its time promoting Vlad, like this video of his spring training double:

@MLB has spent plenty of time hyping up Vlad this spring alone.

We could watch Vlad Jr. crush all day. pic.twitter.com/rZlUMKTjK9

And while, sure, you might say that the league has a clear interest in promoting the future of the sport, the dichotomy between a league saying “Look how freaking awesome this guy is going to be!” while also having an entire structure in place designed to keep those players from hitting the majors (and therefore the market) for as long as possible is as obtuse as it is frustrating.

Not to mention the fact that they’re promoting him and generating clicks and interest off of him (and players like him) before he’s even eligible to join the MLBPA, or make more than the minor league salary. (Yes, he signed for $3.9 million, but that is nowhere close to his market value because the system is also set up to depress international free agent salaries, and that’s also only gotten worse in recent years.)

People are noticing, too.

I just don’t see him as a major league player https://t.co/56FoKVDk5o

He definitely could use another week at AAA.

or it’s fodder for a grievance ? https://t.co/MnRIXn38WG

It’s just a bad look for MLB, in a winter of bad looks. The entire baseball economy looks to be pretty broken at this point, unless you’re one of the thirty people/entities who actually own a franchise. Something is going to have to change at some point. Hopefully the eventual changes also protect minor league players more, too.