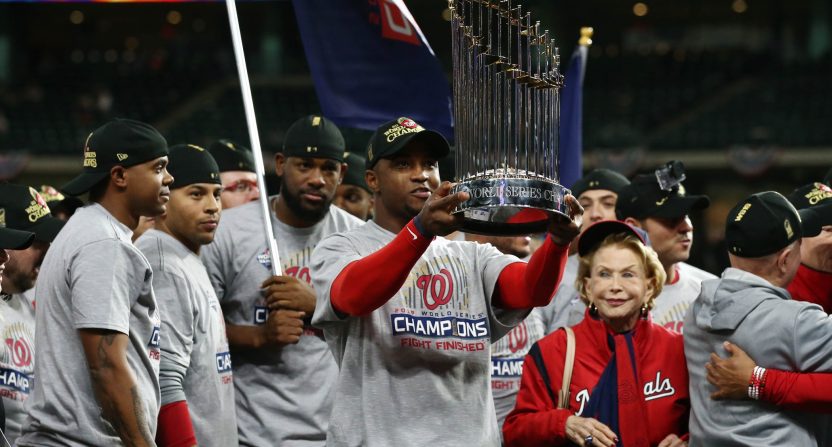 The latest bit of genius from MLB Commissioner Rob Manfred, whose job is seemingly to promote and grow the game, broke on Monday afternoon. An article from Joel Sherman of the New York Post broke down Manfred’s horrendous idea to expand the MLB Postseason to seven teams per league, with the top-seeded team getting a bye, the Wild Card round expanding to a trio of best-of-three series per league, and the top three teams in the Wild Card round (the two other division winners and the “best” Wild Card team, or the three other division winners if the rumored four team/eight division expansion and realignment comes to fruition) get to pick their opponent in a made for TV spectacle that would draw…well, since it’s Major League Baseball, hundreds of thousands of viewers.

It’s a terrible idea for plenty of reasons that have been explained by people far smarter than me, and it would also wreak havoc on the schedule of baseball’s TV partners (to avoid complicating matters even more, let’s just assume ESPN and Turner re-up with MLB, following in the footsteps of Fox, who already has retained their rights through 2028). Instead of having two Wild Card games on two networks, MLB would have a minimum of *12* Wild Card games (and a maximum of 18) to split among four networks (TBS, ESPN, FS1, and MLB Network). And unlike the NLDS, when MLB is scheduling four matchups against one another and only has four games scheduled on the same day twice (or once, in the event of a sweep), all six series would be seemingly be scheduled at the same time or staggered by a day.

Here’s what a schedule would theoretically look like, unless MLB infuriatingly decided to slip off days in the middle of each series. A key point here is that a maximum of *six* MLB Wild Card games would be on the same day as Thursday Night Football.

The scheduling would also be a disaster. What would essentially be happening is that MLB is taking an extra inventory of games (that nobody asked for!) and is airing those games during the day, where they can’t maximize viewership. The “extra” primetime games that MLB would be getting during the Wild Card series would be coming on four nights where they already would have aired baseball under the current format, and if they were adding more games in primetime on those nights (which would be a near-certainty on the Wednesday and Thursday in my proposed schedule), they’d be going head to head with other games, presumably cutting into their own audience (and that defeats the whole purpose of even adding more games!). With six games to schedule on at least one day, there’s going to be significant overlap on the schedule, and while the whole day will be baseball-laden, it won’t be baseball-laden in the sense where you can watch most of every game without missing a whole lot of content.

Furthermore, this format isn’t going to add *better* teams to the playoffs and make them more compelling – it’s going to add shittier teams. With two Wild Cards in each league right now, a third of the league is getting into the Postseason. One 90 win team missed the playoffs in 2019 (a 93-win Indians team that traded Trevor Bauer at midseason, traded Corey Kluber this winter, and added no players of significance, despite winning the AL Central from 2016-18). This format would add Cleveland and the Boston Red Sox (who went 84-78 last year, and traded Mookie Betts this week) to the AL playoff pool, and would add the 86 win New York Mets and 85 win Arizona Diamondbacks to the NL playoff field. Only two teams that finished better than .500 would have missed the Postseason – the 84 win Cubs and the 81 win Phillies, both in the National League. In the AL, no .500 or better teams would have missed the playoffs, and only two teams that didn’t lose 90 games (Rangers, White Sox) would have missed the playoffs.

So, would that be the bar? Finish .500, have a shot at the playoffs? That isn’t compelling. That’s the NBA, where all 16 teams that finished at least .500 last year made the playoffs, and the 14 that finished under .500 missed the playoffs. I don’t see how it makes the playoffs more interesting or more exciting. If you’re the Diamondbacks, who won 85 games last year, what’s your incentive to *spend more* and win three more games so you can…still finish second in the division, but jump from seventh to sixth in the NL seeding? This also puts the second-best team in each league (in the AL this past season, that would be the 103 win Yankees) in a similar situation as the top Wild Card (the 97-win A’s), with the only benefit being that the Yankees get to pick which inferior Wild Card team they would try to take two out of three games from.

In addition, this proposal would devalue both the trade deadline and the offseason. If a team is right around .500 at the trade deadline, why would they sell off their impending free agents, if they feel like they can win five or six in a row and make the playoffs as the third or fourth (just typing that feels ridiculous) Wild Card? With 14 teams making the playoffs, that can turn about 20 teams into theoretical “contenders,” flipping something like four to eight sellers into teams holding pat, meaning there will be less overall movement on the trade market. And if that same team wins the third or fourth Wild Card with 84 wins, no matter what happens in the Postseason, and a $100 million payroll, what’s pushing them to spend $120 million to…win maybe 89 games and the second Wild Card? They’re still playing on the road in the Postseason. They’re still “getting picked” by a division winner. They just spent more money to get a little bit better, when they could have just maintained their previous level of spending and finished in a similar position.

Is that actually a good thing? Less movement and excitement around the trade deadline and offseason, two areas where other sports (specifically the NBA) thrive? Turning the trade deadline into a bust and the offseason into even more of a slog would do nothing but draw attention away from the sport, which defeats the entire purpose of “WOOOO EXPANDED PLAYOFFS!!!”

The general argument is that more games = more excitement = more money = more attention = more fans, and in turn, that will inspire teams to make themselves better. In reality, the watering down of the product will make fans care less about the regular season, plant teams on the fence, and turn the sport into a race to .500 for the league’s middle class. That’s not good for anyone, despite what baseball may be championing to reporters across the country.