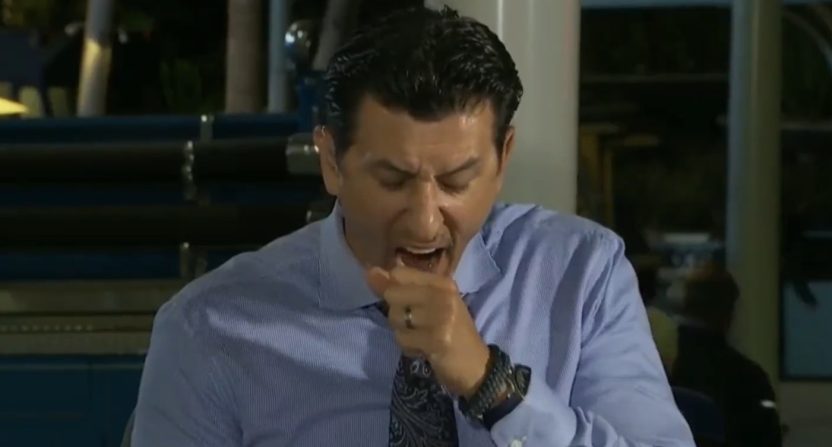 It’s been two decades since out-of-market streaming service MLB.TV launched, but every few years the platform gets revamped with upgrades. And although it may not be intentional, hot mics appear to be an enhanced feature this season.

Because the digital subscription service doesn’t carry the same commercials that air on the RSN feed, it allows MLB.TV to stick with a broadcast longer or return sooner without much notice for the announcer, which doesn’t seem fair. But every few days, another broadcaster, believing they’re in commercial break, gets caught with a hot mic or bad camera shot from MLB.TV. Most of these hot mic instances have been crosschecked with broadcast monitoring service TVEyes to confirm they did not air on linear television.

Tuesday night, there were at least three instances of MLB.TV gaffes that made their way to social media. The first one came courtesy of Atlanta Braves analyst Brian Jordan who said, “Suck it, Leo” after the top of the first inning. Jordan made the comment to co-analyst and retired pitcher Paul Byrd, with the quip being an apparent reference to legendary Braves pitching coach Leo Mazzone.

The second incident from Tuesday night occurred on the Tampa Bay Rays feed, with play-by-play voice Dewayne Staats yelling, “Come on Gary. You want me to help you direct?” Gary Nicholas directs Rays broadcasts for Bally Sports Sun and I’m sure he does a fine job without help from Staats.

And finally, MLB.TV graced us with a yawning Nomar Garciaparra that was good enough to be the cover photo of this post. Following the Dodgers‘ 2-0 win over the Angels, MLB.TV went to Garciaparra before Spectrum Sportsnet LA’s cameras did, and they nearly caught the former shortstop napping.

https://t.co/cPEn7vBcLM's feed cuts to Nomar Garciaparra after a thrilling end to the Dodgers vs. Angels game.

Below are three more MLB.TV hot mic examples from this season, which includes Mets play-by-play voice Gary Cohen singing “stroke me, stroke me,” in response to his debate with Keith Hernandez over the meaning of “stroking out.”

Nobody is talking about this hot mic we just got on MLBtv pic.twitter.com/5d30CQR6nx

We also have Cardinals’ broadcaster Dan McLaughlin talking to a producer or director in a voice that sounds like it could be a Joe Namath impression.

And best for last, is Matt Vasgersian talking to Mark Gubicza during a break in an Angels game from early April. An angry Vasgersian can be heard saying, “You can be that way, I don’t give a shit. Go ahead. Now I know where I’m at with you. You’re not one of my guys, you’re not a bro, you’re not a fan.” To be clear, it doesn’t sound like his gripe was with Gubicza, who chimed in with “exactly,” seemingly in support of Vasgersian.

None of these hot mic blunders on MLB.TV are fireable offenses or even all that damning to the announcer. But considering the rate that they’re occurring, it might not be long before someone gets caught airing language they’re not proud of. I’m not sure whose fault it is, but it doesn’t seem like broadcasters are always warned when MLB.TV cameras are live, which is something that should probably get fixed.