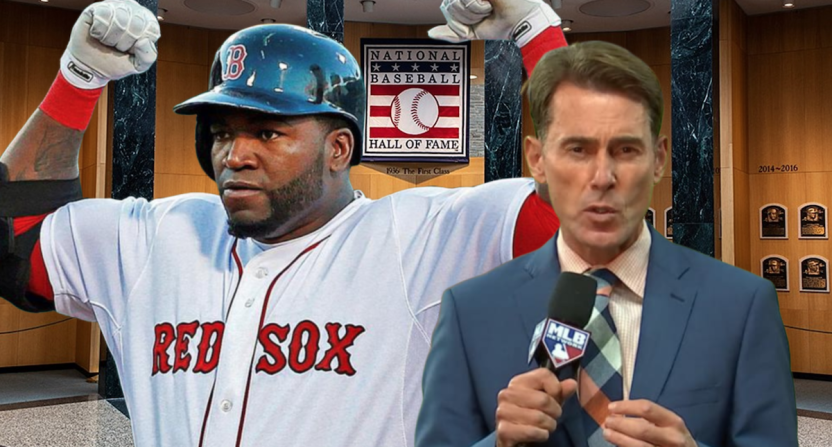 Offseason activity in Major League Baseball has ceased due to the team owners locking out the players once their collective bargaining agreement expired. But December and January is a time when Baseball Writers Association of America members eligible to vote for the Hall of Fame consider and submit their ballots for the 2022 class.

One of those voters, Sports Illustrated’s Tom Verducci, discussed the 2022 ballot among other topics in an interview with Jon Zaghloul of Sports Talk Chicago/WCKG. With Barry Bonds, Roger Clemens, and Sammy Sosa in their final year on the ballot, it’s worth hearing his stance on candidates who were alleged to have used PEDs during their careers.

With Alex Rodriguez and David Ortiz eligible for Hall of Fame consideration, the MLB on Fox reporter and MLB Network insider also shared his thoughts on how PED suspensions or allegations affect their candidacy. (The full podcast is 41 minutes, but the conversation on this topic begins at the 21:27 mark.)

“I tried to come up with sort of a policy, if you will, that most fits what I would do as a journalist,” Verducci explained. “So for me, when it comes to players using steroids — and this would apply not just to a Hall of Fame ballot, but in general if I was writing a story — I needed some proof that stands up to public scrutiny that a person did use steroids.”

Sports Illustrated’s Tom Verducci on his view towards players alleged to have taken PEDs on the Baseball Hall of Fame ballot: pic.twitter.com/k9jJGoW6BO

Verducci went on to say that if there was definitive proof that a player used steroids, he would not vote for him, regardless of whether or not PED testing was officially in place or not. That player knew he was giving himself an unfair advantage.

Zaghloul then asked Verducci what he thought about David Ortiz’s candidacy in his first year on the ballot. Ortiz didn’t fail a test or get suspended like fellow first-timer Alex Rodriguez. But there were suspicions of Ortiz using PEDs. He was among those named in a 2009 New York Times report listing players who tested positive in 2003.

Yet even MLB commissioner Rob Manfred has questioned the veracity of that test result due to the number of false positives in that survey. It’s also uncertain what exactly Ortiz tested positive for if he indeed failed a drug test. According to Verducci, that makes Ortiz’s case unique, one that warrants further investigation and consideration.

Tom Verducci on David Ortiz’s Hall of Fame candidacy and whether or not steroid allegations have to be considered: pic.twitter.com/hKZTUDz6OH

“There has been a report about him failing a supposedly anonymous survey test in 2003, but the substance was never identified, never confirmed,” said Verducci.

“In fact, the players association and the commissioner of baseball went out of their way to exonerate Ortiz as far as that qualifying as a positive test. I don’t think there’s been anything like that. So it is a different case. I’m going to go back and really rethink this one hard, whether that fact should be counted as proof-positive that David Ortiz used steroids.”

Ortiz’s numbers certainly warrant Hall of Fame induction. In 20 major-league seasons, he hit .286 with a .931 OPS, 541 home runs, 2,742 hits, 632 doubles, and 1,768 runs batted in. Some voters might hold Ortiz primarily playing at designated hitter against him. But DHs are an accepted part of the game now and otherswho played significantly at the position, such as Frank Thomas, Paul Molitor, Edgar Martinez, and Harold Baines are in the Hall of Fame.

The entire conversation between Verducci and Zaghloul is worth a listen with the MLB lockout, Marcus Stroman signing with the Chicago Cubs, and Gil Hodges’ election to the Hall of Fame by the Golden Days Era Committee among the other topics they discussed. (For those who don’t know, Hodges is Verducci’s uncle-in-law.)