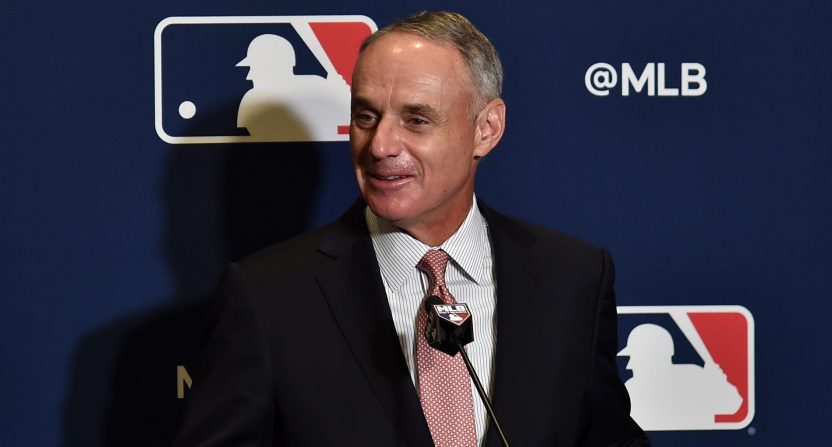 In what would be an appealing move to many cord-cutters, MLB is reportedly considering launching a streaming service that would allow subscribers to watch in-market games.

That’s according to John Kosman at the New York Post, who reports that the league is in talks with all the relevant parties, of which there are many, and that a 2023 launch is not out of the question. There are so many moving parts involved with this kind of thing, of course, but at the root of it is MLB realizing that there’s a shelf life on the linear television model.

Baseball, more than the NBA and especially more than the NFL, is reliant on a more regional system of television deals, team-by-team. Sure, there are national deals with Fox, ESPN, and Turner for the playoffs and some weekly windows, but the RSN model that has propped up team revenue and served as the main conduit for MLB’s product remains the main driver. It’s also a model with a lot of question marks going forward in terms of viability; beyond that, there are a lot of fans who have either cut their traditional subscription packages or subscribe to a service that doesn’t offer their team’s network. (Full disclosure: that includes me! I’m a Cubs fan and a YouTube TV customer, living within the Cubs geographic region.)

Here’s Kosman on how it would work in practice:

While the MLB wants to give fans the option to sidestep pricey cable packages, local games will still be broadcast on cable as they are now and the broadcasts would be identical, according to people familiar with the plans. The league’s MLB.TV service, which offers out-of-market games for a subscription fee, will also continue to operate, sources said.

Sources said MLB Commissioner Rob Manfred could end up offering cable-TV giants a piece of the streaming revenue to compensate for potential subscriber losses. Manfred’s pitch is that cable TV won’t lose many subscribers, as MLB is mainly targeting younger customers who have already cut the cord, sources said. The cable companies don’t have streaming rights but could retaliate by paying less to broadcast games if they don’t like the bargain, sources said.

That’s a key aspect to this whole idea, because the current networks would still have to be on board. It’s not supplanting the current model, it’s supplementing it, with eyes on an audience that either can’t or won’t pay for the current arrangement. The issue for Manfred will be getting those companies on board, and one company in particular could present a big hurdle. That’s because Sinclair has been trying to launch their own in-market streaming service for a while now, and would likely challenge any step in this direction from MLB.

According to Kosman, MLB and Sinclair have already engaged on this exact subject, with MLB viewing Sinclair as willing to play ball (sorry) thanks in large part to Sinclair’s financial situation.

Both MLB and Sinclair have plausible legal claims to the hometown-game streaming rights. Nevertheless, insiders say MLB wants to launch its service independently of Sinclair’s Diamond Sports unit, which currently airs most of its MLB games through its Bally Sports-branded regional TV networks.

While Manfred’s plan looks ambitious, sources said recent troubles at Sinclair may give him a leg up in talks. As first reported by The Post, Sinclair in June tried to raise $250 million to launch its own video-streaming service, but cannot do so without MLB approval.

At first, sources said Sinclair tried to persuade MLB to allow it to control the service for several years before handing the reins to MLB. But the league wasn’t having it, citing Sinclair’s financial condition and raising concerns that the company won’t be able to spend the money that’s needed for high-quality broadcasts, sources said.

In the end, the likeliest path to this happening before 2023 is MLB cutting just about everyone into a potential new revenue stream. Interestingly, Kosman also reports that MLB has had talks with the NBA and NHL about bringing the other leagues in, which would absolutely make sense; it would give the service year-round appeal (assuming a bundle is offered of some kind, although it’s also possible MLB would just be providing technical resources), and a lot of local rights for those leagues are held by the same partner MLB would be negotiating with. Those leagues also certainly see the issues with relying on a linear model going forward: an aging and shrinking audience.

This is obviously an ambitious move for MLB, and there are a lot of details that still need to be filled in. It’s hard to imagine the rightsholders being easily assuaged here, too, but MLB holds a lot of cards themselves. This kind of service, especially with the potential to be a joint effort with two other major American sports leagues, would be a massive undertaking, and it really could upend a lot of current standards.