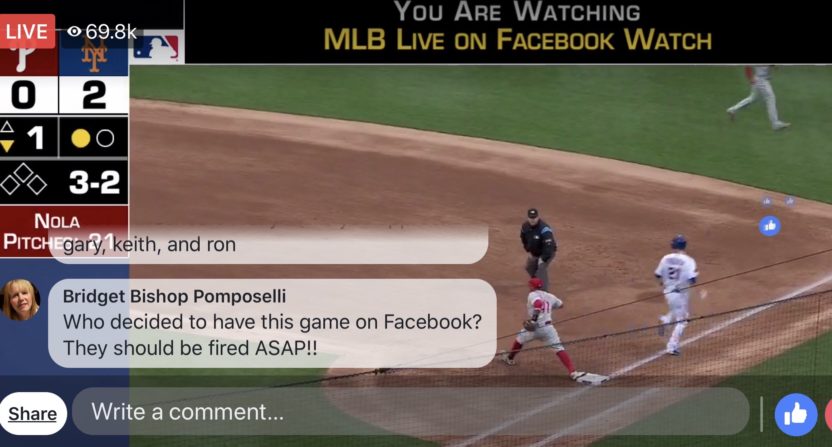 Facebook’s debut as an exclusive MLB partner came on Wednesday with the streaming of a Philadelphia Phillies-New York Mets telecast. Unlike MLB.TV, where the streams were bona fide simulcasts of TV broadcasts, this production was done solely for Facebook.

There were no local TV feeds, so the only ways to view the game was on Facebook Watch or through MLB’s Facebook page. This was the first of 25 weekly afternoon games that will be shown on the platform this season.

The game was scheduled to begin at 1 p.m. ET and Facebook began its stream on time. There was a countdown clock that ran until the game stream commenced. Play-by-play man Scott Braun was the face of the debut and he explained that this would not be a normal production. There would be no commercials and the telecast would be interactive with Facebook viewers.

Braun would be joined by Cliff Floyd representing the Mets and John Kruk for the Phillies. Alexa Datt of MLB Network was the field/social media reporter providing features and providing comments from viewers. This will not be the regular team. Each week’s game will have different analysts representing the teams playing.

Due to weather issues, the game was delayed until 2:45 p.m. ET and Facebook put up a slide. At its highest point, there were about 15,000-16,000 viewers looking at this slide waiting for the game to begin. Perhaps Facebook could run an episode of “Ball in the Family” for rain delay programming. 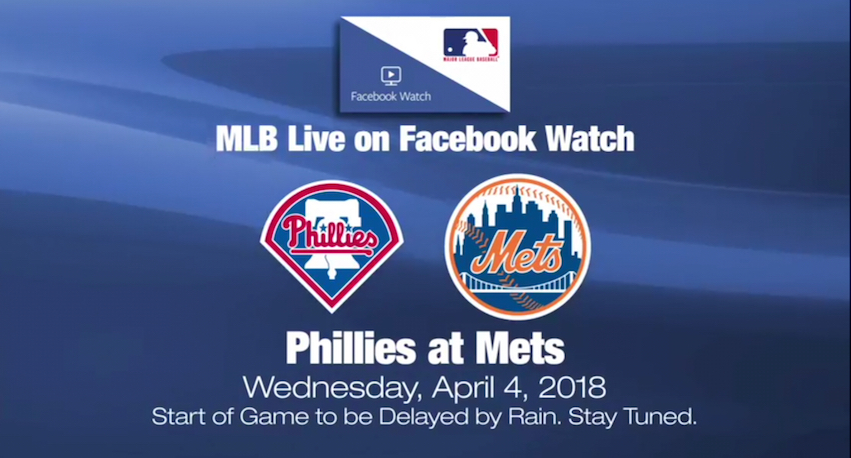 When the game finally got underway, the MLB Network-produced broadcast started with a scorebug on the left side of the screen and a bar on top which was rather distracting: 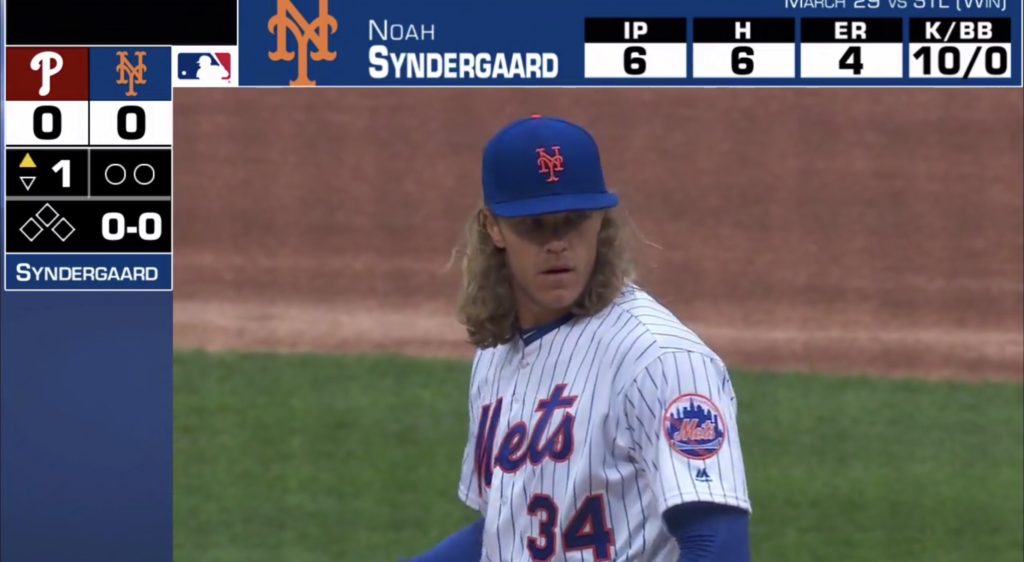 This was rather intrusive, especially on a mobile screen. While the larger numbers were appreciated, especially on a cell phone, it did take up too much of the screen. And then when comments appeared, the entire viewing experience became cluttered:

During the stream, Braun suggested to clear the screen, viewers could swipe right to get rid of the comments. But as you can see from the comments above, not everyone embraced the idea of a Facebook-exclusive game.

And because there weren’t ad breaks, there were pre-taped features on both teams, interviews and food segments. A discussion on ice cream spilled from an in-between break into the action.

This was not your father’s baseball broadcast, but then again, it was not supposed to be. MLB is attempting to gain a new audience and with no territorial restrictions, fans in the home markets were able to access the feed — unlike MLB.TV, which provides out-of-market feeds only.

There was also a countdown clock in-between innings to signify the breaks in the action.

Eventually, the intrusive bars on the top of the screen and on the left side disappeared and the scorebug remained in the upper left-hand corner with larger graphics. On a 12.9-inch iPad, it seemed unnecessary. But on a smaller mobile screen, the large numbers were appreciated, especially when watching outside or in a car.

During a montage highlighting Mets third baseman David Wright, the Facebook feed froze, but it was quickly fixed. MLB, in a statement to the New York Times, noted that it was trying something different:

“Today marked a historic and important step as we experiment with new platforms for fans to watch games. Our fans provided great feedback throughout their experiences today, which will continue to help us as we present these social-first broadcasts on Facebook each week.”

I jotted down the Facebook MLB audience every couple innings just to try to approximate an average minute audience. Ended up with an average of 75k.

Badly want to watch #Phillies #Mets, professionally want to watch game. But just too many glitches/not pro broadcast This was not rolled out well by MLB with better explanation how not to get all Facebook bells-whistles, plus currently concerned to spend too much time on Facebook

I didn't have a problem with the whole MLB Facebook thing til I saw the graphics looked like this: pic.twitter.com/j2LJZkywoY

Putting exclusive games on Facebook is a worthwhile experiment for MLB. I just might have considered starting the first few weeks with less, shall we say, *vocal* fan bases than Mets and Phillies in order to get people used to the concept.

Right now, this is a work in progress for Facebook. There’s room for improvement and having no local TV will be an adjustment for fans. Expect more changes down the road as the “Great Facebook Experiment” continues.