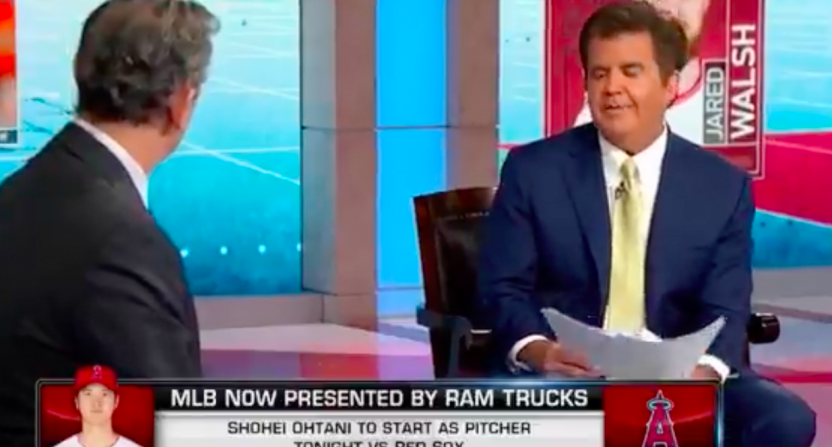 Whatever Shohei Ohtani is doing right now, it’s working. On Wednesday, the Los Angeles Angels superstar hit his 32nd home run of the season, breaking Hideki Matsui’s record for most dingers in a major league season by a Japanese player. Mind you, he broke that record before the All-Star break. The 32-homer mark is the most by any American League player since Chris Davis in 2013.

Everything about Ohtani’s offensive output is made the more impressive by the fact that he’s also pitching regularly for the Angels. Ohtani improved to 4-1 on Tuesday in a seven-inning effort against the Red Sox. With 11.7 strikeouts per nine innings and a 3.49 ERA, he’s the best pitcher on the staff and inarguably one of the top 30 pitchers in the sport right now. No wonder he recently became the first player selected to the All-Star Game as both a pitcher and a hitter.

Even though MLB history is littered with players from former eras who pitched and hit, what Ohtani is doing feels unprecedented. And while there might be a hesitancy to let him continue pulling double-duty, lest it impact the durability of his career, very few people seem to be seriously suggesting that the Angels shut him down on one side so that he can focus on the other.

MLB Network studio host Brian Kenny, however, seems to think in the midst of this generationally historic season, the best thing the Angels could do is convert Ohtani into a full-time offensive player and scuttle his pitching performances. He said so on Tuesday night following the Angels win over the Red Sox, in which Ohtani gave up five hits and two earned runs in the victory.

Kenny posed the idea as a possibility to analyst Joel Sherman. To put it mildly, Sherman did not agree.

Shohei Ohtani is a generational, once in a lifetime talent. Instead of celebrating and appreciating what his abilities can bring to the sport, the industry chooses to criticize

The same day he tossed 7 innings with an RBI double, an MLB Central host is saying he shouldn’t pitch pic.twitter.com/fL9MigqNM5

Kenny: “That was the worst start of his career…it just wasn’t happening for him. He’s already hit two home runs in the series. I just don’t…mentally, it’s difficult to be…he goes from the slugger… ‘oh, now you can pitch, what you can’t find the zone, what’s wrong with you?’ It kinda makes sense to me, Joel. Where are you on this now?”

Sherman: “I’m glad we’re doing it. He’s succeeding. There’s thing rush to still try to come to judgment about what he should do. What he should do is…he’s the best starting pitcher and the best hitter on the team. Why would you stop him from doing one or the other?

Kenny: “Cause one could damage the other.”

Sherman: “Could it? Like, that’s just a theory. Like, the theory up to this year was they babied him and they got less out of him in every way…He’s the best Los Angeles Angel. He’s their best pitcher. He’s their best hitter. Why would you change anything?”

Kenny: “Because he could thrive as your best offensive player-”

Sherman: “But he IS thriving as their best offensive player!”

Sherman: “But you ARE getting that.”

Sherman: “He had one bad start…Gerrit Cole has been terrible for a month, should he stop pitching?”

Sherman: “The only comparable to him in the history of the sport is [Babe] Ruth. Well, once Ruth stopped pitching, how did it work out for him? Did it hurt his offense at all? Am I missing something? In case you didn’t get the memo, he hit 714 homers. He’s the best hitter in the history of the game.”

Kenny: “You’re pointing out he became Babe Ruth when he was allowed to flourish offensively.”

Sherman: “…So if you were the general manager of the Angels right now, what you would do is stop him from pitching?”

Kenny: “I’d skew towards offense at this point, full-time. If he was my player for five years, ten years, I think I say I want him on offense. And I don’t want him pitching.”

Sherman: “You would use one of the 15-20 best starting pitchers in baseball to stop starting because you’re worried about something that could happen.”

There’s nothing wrong with a little healthy debate over whether or not Ohtani can sustain his dual role over the course of his entire career. But the timing of this debate, following one slightly shaky pitching outing (that ended with a win), feels out of step with all of the evidence that we’ve seen regarding his ability to pull double duty. Hence, Sherman’s incredulity with Kenny’s assertions at a time when things are going very well.