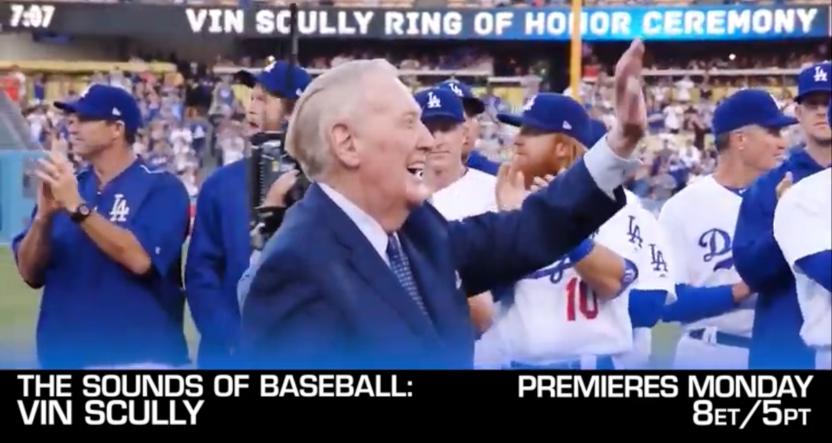 With few live sports on right now thanks to the COVID-19 pandemic, networks are having to adopt some unconventional programming solutions and come up with some new show concepts. A new one from MLB Network is The Sounds of Baseball, hosted by Bob Costas and Tom Verducci. It focuses on announcers, and it launches Monday with an episode on famed Dodgers broadcaster Vin Scully. Here’s more from their release:

The first episode includes Scully’s opening of the Drysdale record-setting game – which also happened on the same day Robert F. Kennedy was laid to rest – along with many of his famous and lesser-known calls, ranging from “She is … gone!” to a late 50’s skirmish on the field between the San Francisco Giants and Dodgers at Los Angeles Memorial Coliseum. Beginning with Scully and within each episode, Costas and Verducci will share anecdotes, personal stories, and their thoughts on the impact each broadcaster has had on baseball and generations of fans. Following Monday’s program, future The Sounds of Baseball episodes on legendary broadcasters Jack Buck, Bob Uecker and others will be announced at a later date.

Scully calling Hall of Famer Sandy Koufax’s perfect game on September 9, 1965, Don Larsen’s perfect game in Game 5 of the 1956 World Series on October 8, 1956, and Hall of Famer Hank Aaron’s record-breaking home run on April 8, 1974, are some of the many highlights featured throughout Monday’s The Sounds of Baseball. To complement this program, MLB Network will re-air three famous games on Monday, June 8, which featured Scully behind the microphone, including Hideo Nomo’s no-hitter on September 17, 1996 for the Dodgers at 12:00 p.m. EDT, Game 6 of the 1985 NLCS between the Dodgers and St. Louis Cardinals on October 16, 1985 at 2:00 p.m. EDT, and the Dodgers’ Clayton Kershaw no-hitter on June 18, 2014 against the Colorado Rockies at 4:00 p.m. EDT. The Kershaw no-hitter would be the last of the 21 no-hitters Scully called in his legendary career.

And here’s a short trailer:

This is a cool idea, especially for those who are interested in broadcasting history. And it’s neat to see a network focusing not just on classic games, but on classic announcing calls. There are also more of these programs in the works, with Dan Caesar of The St. Louis Post-Dispatch writing Friday that upcoming episodes will cover Jack Buck, Harry Caray, and Bob Uecker. Here’s more from that piece:

Costas said he and Verducci have “submitted a long list of moments (from the subjects’ careers) to the producers, who will get what they can — probably 90%” of what is requested. “Then we’ll individualize the pieces.”

Costas said the idea is to humanize the broadcasters rather than just run a reel of big or memorable calls. To that end, viewers can expect to hear personal stories and anecdotes about the subjects as told by the hosts.

With Buck, Costas said the plan is to showcase his “wit, his sentimental side and how he treated people he encountered.” Likely to be included is the story of the time Buck invited a 13-year-old boy who was having a tough time with cystic fibrosis into the broadcast booth.

This is certainly a notable concept, and it’s something that could work well for MLB Network given how many prominent baseball broadcasters there are out there. Costas and Verducci also seem like good hosts for this, given their knowledge of baseball history. We’ll see how it turns out.