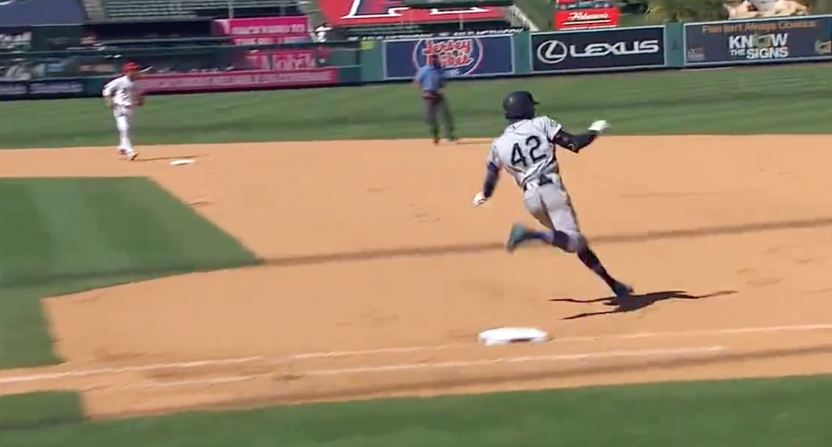 The specialized camera, mounted on tracks atop the first-base dugout, can follow runners as they dash from home plate to first base. Not only does the camera view show a new perspective on how fast runners are moving down the line, but it also provides different angles on great defensive plays in the infield.

“Speed Cam” was used in a MLB game for the first time earlier this season during a Mariners-Angels game in August. But the process of going from a makeshift setup to something more sophisticated, then getting it ready for a telecast was six or seven years in the making, according to MLB Network Senior Coordinating Producer Chris Pfeiffer.

“We were doing Arizona Fall League and I’ve always wanted to try a camera on a track on the dugouts,” Pfeiffer told Awful Announcing. “The day before a game, we said why don’t we just take one of our cameras and just strap it on one of those automotive creepers that you use when you’re working underneath your car.”

Pfeiffer said that “Speed Cam” was almost used during last year’s All-Star Futures Game in San Diego, but that didn’t work out. Instead, the camera made its debut this past February during the MLB4 game in Arizona between Michigan and Vanderbilt. And then with MLB opting to play a shortened season with no fans in the stands due to COVID-19 concerns, an opportunity presented itself.

“We thought this would be the perfect time to try it since there aren’t any crowds,” said Pfeiffer. “We wouldn’t be blocking any views, even though it’s only 30-36 inches high and it’s constantly moving back and forth. But we thought this was the best time to try to get it out there.”

Pfeiffer added that the camera probably could be used with fans in attendance but as technology evolves, allowing the chassis to be lower and the camera to be smaller, it’s more likely to be in a ballpark under regular circumstances. Eventually, he hopes to get the camera in front of the protective netting along the first-base seats. But that will depend on Major League Baseball and individual clubs giving approval.

As with any new toy, producers had to learn when “Speed Cam” worked best and for what sorts of plays. According to Pfeiffer, it quickly became apparent that the camera worked best in motion, keeping the entire play in frame. Static shots or even slow movement typically don’t provide visuals different from what other cameras already provided.

“The dynamic part of this camera is that it can really get up to a good speed up and down the dugout,” said Pfeiffer,” and give you that different look lower to the field. More intimate. You can appreciate that speed down at field level.” 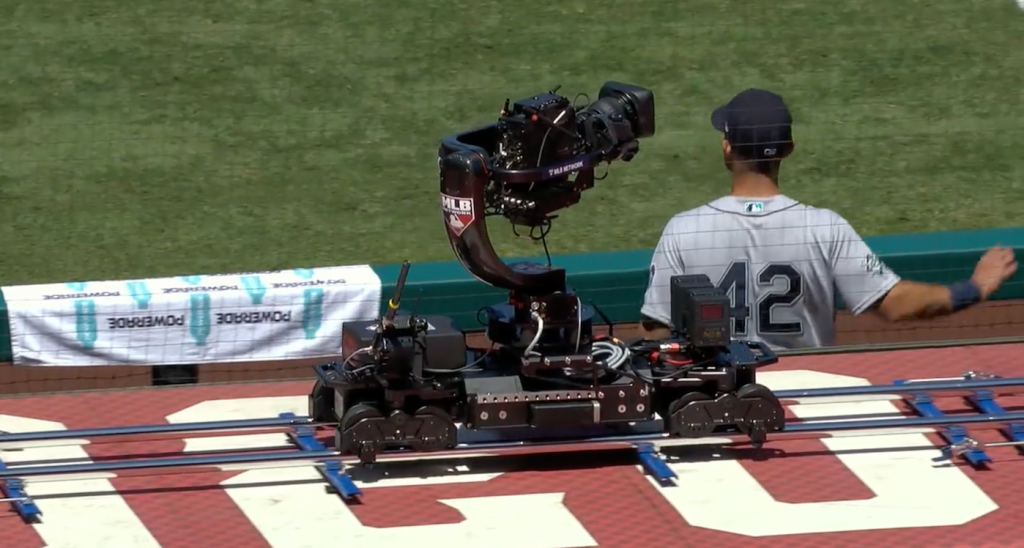 Pfeiffer explained that the “Speed Cam” setup is expensive — custom-built with components not typically used in TV cameras, along with the wheels and tracks — so it probably won’t be used in a greater number of telecasts or utilized by, say, regional sports networks. Making the camera smaller presents issues as well, notably what sorts of lenses can be used. Besides the technology, MLB and stadium approvals along with blocking spectators are also considerations.

“Who knows? Maybe we’ll get to a place where the camera is a hell of a lot smaller and it can go in front of the netting on a much smaller track,” said Pfeiffer. “Right now, we’re just picking our places to get it out there. With no fans and more access, it was a no-brainer.”

Matt Vasgersian, Jim Kaat, and Buck Showalter will be the broadcast team on Wednesday with Tom Verducci reporting. Showalter also called the August game in which “Speed Cam” debuted and was enthusiastic about it, as you can hear in the videos embedded above. This will be his first postseason broadcast. MLB Network’s telecast begins at 2 p.m. ET.