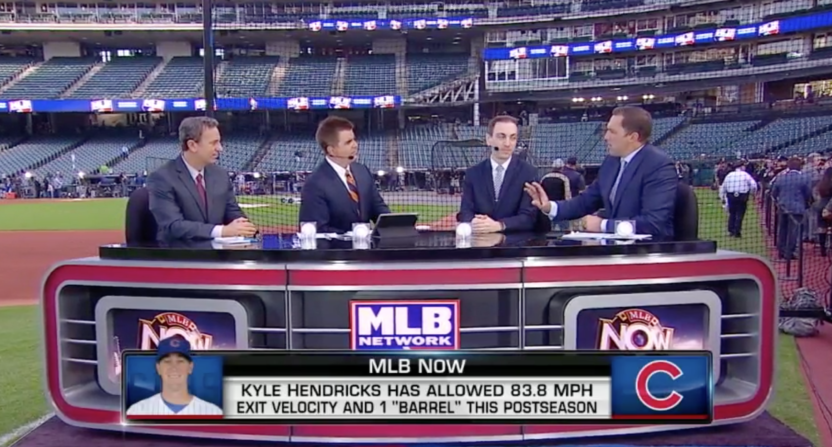 MLB Network will offer an interesting twist on their Cubs-Giants broadcast Wednesday, featuring an advanced stats-heavy roundtable discussion throughout the game.

This will be MLB Network’s third go-round with this kind of telecast, after airing similar formats in both 2015 and 2016, though this year we can expect a heavier emphasis on Statcast, which continues to grow in sophistication and usefulness. Here’s what Kenny, who has hosted both years, told Awful Announcing last summer about the “alternative broadcast:”

In addition to MLB Network’s dabblings in sabermetric-infused broadcasts, Fox has toyed with a similar format, including during the 2014 playoffs.

This kind of broadcast is polarizing by design. Traditionalist fans, who already think baseball on TV features too many graphics, too many stats and too much talking, will obviously be turned off. But the MLB Now broadcast will presumably appeal to younger fans, who are more likely to accept advanced stats and often prefer as much on-screen stimulus as possible. The concept is probably too radical to gain widespread traction anytime soon, but as a one-off here and there it’s an enticing idea.

In recent years, baseball media powers that be have become increasingly open to the idea that many valuable perspectives on baseball go unrepresented in the traditional broadcast or on the traditional studio show. But still, most games feature a neutral play-by-play man alongside a grizzled former player, and most studio panels feature a neutral host alongside three grizzled former players. And even when outside voices do get airtime, they’re often kept in their own box (i.e. ESPN’s “nerd version” of Baseball Tonight). The beauty of MLB Network’s alternative broadcast is that it gives voice to several of those perspectives all at once: the former player, the reporter and the stat guy.

The future of televised baseball probably does not include a studio show interpolated over a live game, as we’ll see Wednesday afternoon on MLB Network. But it probably does include former players, statistical analysts and reporters sitting side by side.