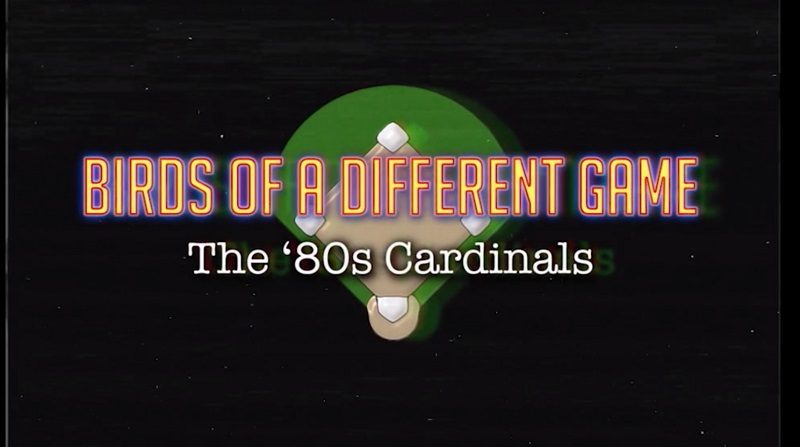 Baseball in the 1980s (to me, at least) is defined more by moments than players, teams, or games. And those moments, while iconic, end up overshadowing what immediately followed, for better or worse. For instance, Kirk Gibson’s home run in the 1988 World Series – I can’t tell you a damn thing about the rest of the series, aside from the fact that the Dodgers won. The same is true for Game 7 of the 1986 World Series after the Bill Buckner play and any highlights of the 1989 World Series after the earthquake.

And then there is the story of a team that won three pennants during the 1980s, overshadowed among all those moments (while also being featured in a pair of them). The St. Louis Cardinals went to the World Series three times in the ’80s, took all three of those Fall Classics to seven games, and prevailed once. You may not recall what happened in 1982 or 1987, and you’re probably running a bit empty on 1985 aside from two moments, one that worked to the Cardinals’ benefit and one that worked against them and has gone down in baseball history as one of the worst calls of all-time. At least MLB Network’s Birds of a Different Game doesn’t start with 1985, and gives 1982 (and the formation of those three pennant winning teams) its due.

The film highlights how the Cardinals’ style of play, which was nicknamed “Whitey Ball” after Herzog’s managerial style, saw them take advantage of the artificial turf and cavernous outfield at Busch Memorial Stadium to lead the NL in stolen bases for seven consecutive seasons from 1982 – 1987, finish first in NL team fielding percentage in eight different seasons, and finish top five in NL team ERA in five different seasons.

First off, I want to give some props to the person whose idea it was to infuse a little extra 1980s in this with some of the visual and audio effects during the archival footage. For me, it added a little something extra to make this doc stand out from others.

I liked that the film didn’t screw around too much with the history of the Cardinals prior to the 1980s, and jumped right in with the hiring of Whitey Herzog and his molding of the Cardinals in the image he wanted, which includes a bonkers week in which he signed free agent catcher Darrell Porter, acquired Rollie Fingers in an 11-player trade, and flipped Fingers and incumbent catcher Ted Simmons to the Milwaukee Brewers (who were still entrenched in the AL at the time) to get them both out of the National League.

The film really takes off when Ozzie Smith is acquired after the 1981 season, as his interview spots add so much more color and context. It then rolls through the Cardinals’ 1982 World Championship season and gives plenty of detail to the World Series, which I appreciated as someone who wasn’t born yet. I also enjoyed the focus on how Herzog used closer Bruce Sutter as a multiple inning weapon in the Fall Classic, which we’re starting to see more again with relievers after years of Capital C Closers not being allowed to record more than three outs or pitch outside of the ninth inning.

As in many of these team-centric MLB Network docs, I think the quality fell off after the featured team won their first title (see also: the Atlanta Rules doc about the 1990s Braves). The 1983 and 1984 seasons were glossed over, and I wish Herzog and Keith Hernandez talked more about the trade of Hernandez to the Mets in ’83. Narrator John Goodman mentions “off-the-field issues,” historian Doug Feldmann has a line about “the drug situation hitting baseball,” and Herzog doesn’t mention Hernandez when talking about the league-wide drug issues (also covered in MLBN’s last doc about Dave Parker). While the Parker doc is open about the Pittsburgh drug trials and the fallout, this doc seems to gloss over it.

We then roll into 1985, and a few memorable moments (again with the moments…) from the Postseason are featured: Vince Coleman’s leg getting rolled up in the tarp, Smith’s improbable walk off home run in the NLCS (and Jack Buck’s iconic call), and Don Denkinger’s absolutely horrendous blown call in the World Series.

I mean, look at this shit. 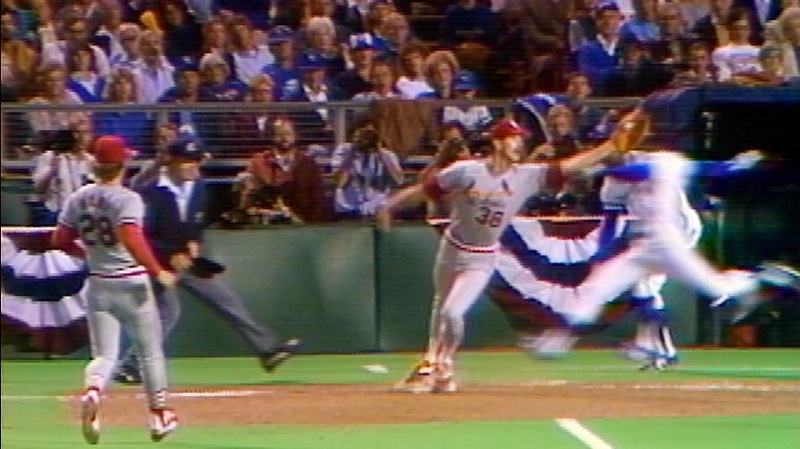 Anyway, as I often appreciate, the film added context to the three moments. Terry Pendleton described just what the hell happened to Coleman and how it did. Smith’s homer was followed up by highlights from Game 6 of the NLCS, including Jack Clark’s arguably more important home run. And finally, the Denkinger call in Game 6 is put in the appropriate setting, showing how the Cardinals completely fell apart in the rest of the ninth inning after the call and how they simply did not show up in Game 7. Those three moments (well, at least the story of Coleman and the tarp machine) have gone into baseball lore, but all would be forgotten if not for what immediately followed. I’m pleased this film showed us what happened afterwards to amplify the moments even further.

One major thing about this film that nags me is the lack of participation from some of the more critical Cardinals players from the ’80s. Porter, Bob Forsch, and Joaquin Andujar have all passed away, so it was impossible to feature either in an interview segment. But Sutter, who was such a key part of that 1982 team, wasn’t there. Neither was Willie McGee, the 1985 NL MVP and a member of all three of the pennant winning teams, nor Clark, whose NLCS homer in ’85 was huge (though his post-career sports talk radio adventures in St. Louis may have had a role in his absence). I wouldn’t have even minded a brief Todd Worrell cameo, since he was the pitcher whose foot Denkinger missed on the bag.

I also thought that more time could have been spent on the 1987 World Series. The Cardinals had a three games to two lead and were trying to win the title on the road, just like in 1985. And just like in 1985, they couldn’t close the door, despite having leads in both games. Instead, the loss is just sort of brushed away as “sometimes the cards aren’t in your favor” by Jon Hamm (the only one who actually talks about the ’87 World Series on camera). Hamm’s fandom is, at the very least, authentic and bleeds through in his segments, which is how it should be if you’re going to have a non-baseball person interviewed. Al Michaels also makes a couple appearances, largely giving background for the Denkinger call and the ’85 Series and the overall vibe of the Metrodrome in Minneapolis during the ’87 Series.

All in all, I felt like this one could have used an extra half hour, but I wasn’t desperate for that extra half hour. To make a bad food analogy, there seemed to be enough meat left on the bone to stuff yourself a little more, but I was already pretty full and wasn’t sure if that extra meat was worth the effort. Cardinals fans will enjoy the film, Cardinals haters will replay the Denkinger segment over and over, and those ambivalent to the Cardinals should appreciate the look back at one of the more undercovered franchises in a decade full of highlight reel moments and little else.

Birds of a Different Game: The ’80s Cardinals premieres at 8 PM ET on Tuesday, January 28th on MLB Network.