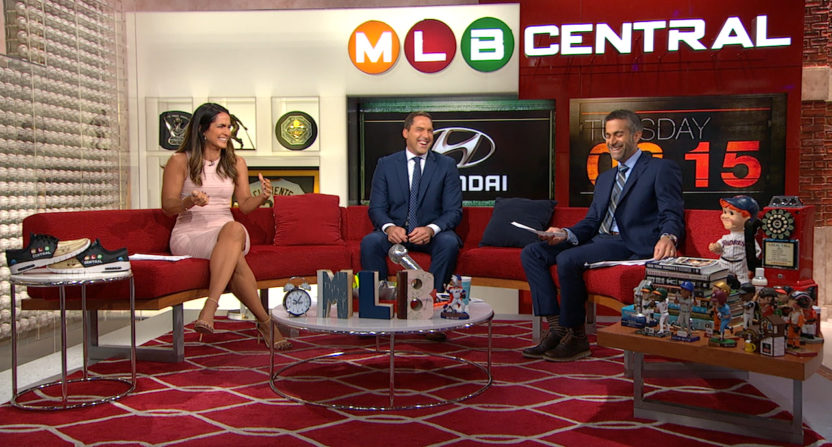 Jon Heyman would not stop saying the word “bro.”

Heyman, the typically staid veteran baseball reporter, was live on MLB Network, sitting face to face with a speaking base, displaying a sense of comedic timing I wouldn’t have thought he had. The show was MLB Central and the game was “Just Playin,” a role-play exercise that currently pitted Heyman as Bryce Harper against Matt Vasgersian as the base that injured him.

“I don’t care about your apologies… bro,” Heyman said, prompting raucous laughter in the control room and on set. “I don’t need to be injured by a dangerous base that’s worth 50 cents… bro.”

A few “bros” later, the segment—which also featured a killer Chris Russo impression from Vasgersian—wound to a close. The scene was about as absurd as things get in the straight-laced world of baseball television—or, for that matter, sports television—but it was fairly typical of MLB Central, the live morning show on MLB Network.

The three-year-old show, hosted by Mark DeRosa, Matt Vasgersian and Lauren Shehadi, is defiantly different. It airs daily at 10 a.m. ET, opposite ESPN’s First Take and FS1’s Undisputed, and in some ways it serves as a direct response to the debate-show genre. There is no contrived disagreement, no high-pitched debate and, most notably, no pretense that sports are serious enough to pop a blood vessel over. In place of those conventions are irreverent stunts, like Jon Heyman talking to bases.

“None of us take ourselves super seriously,” Vasgersian said later. “We’re just all kind of like that, and the show just evolves like that.”

On Tuesday, I spent a few hours at MLB Network headquarters in Secaucus, New Jersey, stealing an up-close look at a sports talk show that is unlike anything else on its network—or anywhere on sports television. 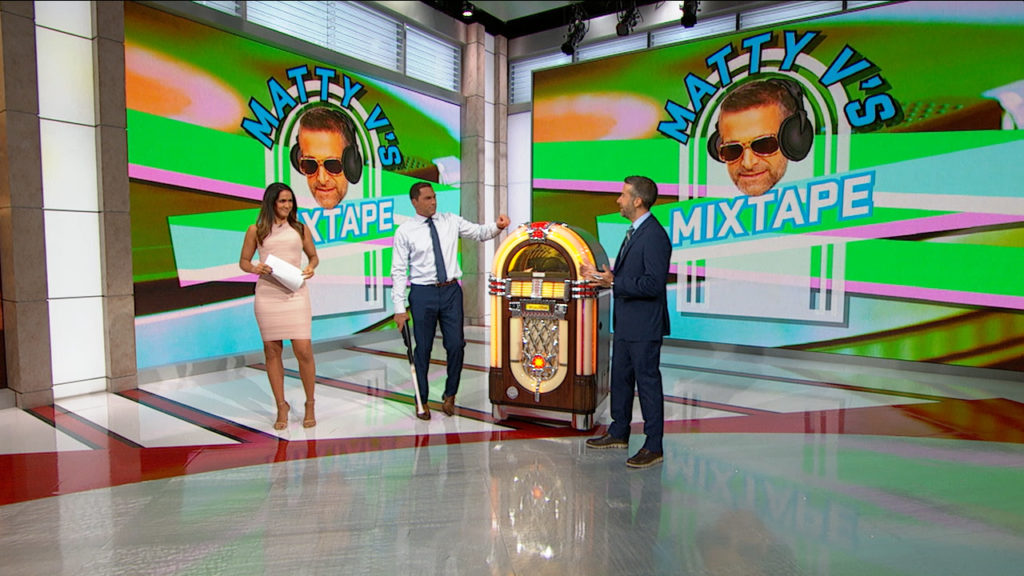 The typical, time-honored sports studio show format involves one host alongside two or three or four former players, who serve as analysts on everything from awards races to player mechanics. But thanks to the rise of advanced stats and the wider accessibility of sports knowledge, that model has begun to fracture in recent years, with MLB Central among several shows to break that mold. Increasingly, sports shows on MLB Network and elsewhere include a pleasant variety of voices beyond the ex-jock.

MLB Central’s everyday lineup features one non-playing baseball nerd in Vasgersian, one self-proclaimed “casual fan” in Shehadi and one charismatic former player in DeRosa. Some segments feature a second ex-player (on Tuesday it was Ryan Dempster) and other segments include an “insider” (in this case, Heyman). The set-up represents something close to an egalitarian ideal: Many different vantage points on baseball, all given equal respect.

Before Tuesday’s show, I met with senior producer Mark Capalbo, who explained that MLB Central has been shaped by its trio of hosts, who have worked together since the show launched in 2015. They, not the producers, come up with the light-hearted segments at the heart of MLB Central, with Vasgersian the leading idea-generator and DeRosa and Shehadi happy to play any role.

But despite its democracy of perspectives, MLB Central has a clear star, and it’s DeRosa, the longtime utility player who retired after the 2013 season and has worked at MLB Network ever since. The 42-year-old checks every box for a sports TV analyst. He’s telegenic, he’s comfortable in front of a camera, he has an appealing sense of humor, and he clearly knows the game. His vaguely frat-boy presentation belies that he’s one of two University of Pennsylvania grads (along with ex-ESPN standout Doug Glanville) to play in the Majors this century. On MLB Central, DeRosa receives the most airtime, speaks the loudest and longest and fronts segments like “Dr. DeRo” and “DeRo’s Deep Dives” that mix absurdist graphics with hard-core baseball analysis.

Early in Tuesday’s show, DeRosa stood in front of a giant screen and excitedly implored Aaron Judge to tuck his hip and avoid “flying open” when he swings. The analysis was a bit manic, but DeRosa’s energy poured through the TV as he spoke in technical terms about the Yankee rookie’s opposite-field power. Then, because this was MLB Central and not, say, MLB Tonight, the segment ended with a joke about Shehadi’s dancing and some banter between Vasgersian and DeRosa on the latter’s seats at Yankee Stadium the previous night.

In many ways, DeRosa reminds me of longtime analyst Harold Reynolds, and if that sounds like a dis, it’s not intended as one. Like Reynolds, DeRosa exudes passion and bubbles with enthusiasm, which sometimes leaves him marble-mouthed but more often makes for fun TV. Unlike Reynolds (and many, many other former-player analysts) DeRosa embraces statistics, even ones that don’t appear on baseball cards. Midway through Tuesday’s show, he began to cite a player’s batting average, then cut himself off mid-sentence to say he prefers OPS.

Not every former player would be comfortable playing the jock, the jokester and the stat guy all on one TV show. DeRosa told me after the show that his whole life prepared him to take a well-rounded view of baseball, from his days watching games with his dad to his time as a young player with the Atlanta Braves.

“I remember sitting at Yankee games with [my dad], and he’d quiz me on how Mattingly was pitched in the first and how they would attack him in the fifth,” DeRosa said. “And then coming up as a utility player, I spent a lot of time on the bench, sitting with Greg Maddux and John Smoltz and Leo Mazzone and all the coaches. I would constantly watch the games through their eyes. And then you hang around long enough and you meet GMs and owners, and then you’re like, ‘How do they tick?’ I’ve always looked at it like, I was never the most naturally gifted, so I had to beat you in other ways, so I just grew to love the game from all different aspects of it.”

Everyone I asked about DeRosa remarked at how much time he spends preparing for each day’s show. He stays up late watching West-Coast games because, having played in the Pacific time zone, he worries the teams out there don’t get proper respect. While he watches, he texts producers ideas for the next day’s segments.

“A lot of athletes rest on their experience playing the game, and they can get by that way, but he studies it,” Shehadi said of her colleague. “He lives it, because he doesn’t want to say something wrong, as a tribute to the players who work so hard. I’ve never seen an analyst work as hard as he does.”

“DeRo is hard-core baseball analysis,” Capalbo said, “but he can flip it around on a dime and do a ‘50 Shade of Sonny Gray’ segment.”

MLB Central seeks to do a little bit of everything. It’s a credit to Vasgersian, Shehadi and especially DeRosa that the show manages to pull it off. 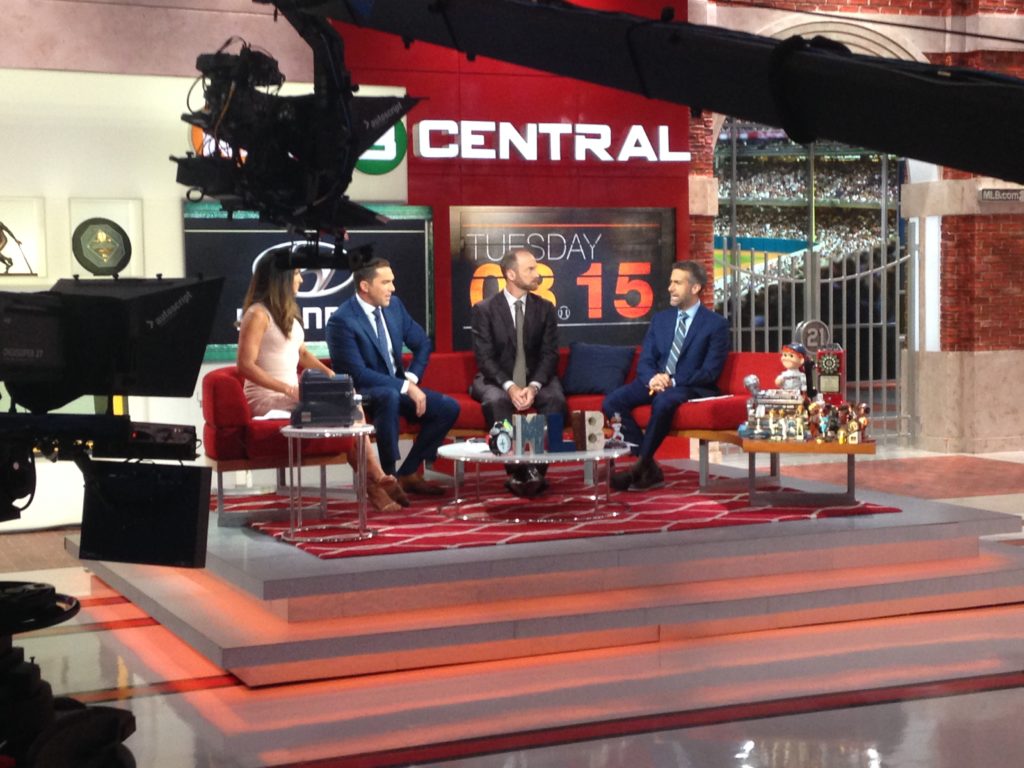 MLB Central is far from perfect. The bits don’t always work, some segments feel chaotic, and the inside jokes border on excessive. But those flaws are mostly side effects of the risk-taking that makes the show compelling.

MLB Central is not the only irreverent sports talk show on TV. It shares characteristics with half-hour ESPN programs Highly Questionable and SportsNation as well as another MLB Network talk show, Intentional Talk. But the way it blends humor, analysis, conversation and personality makes it something close to unique.

Of course, there’s sometimes a price to being different. Whether because of the content or the time slot or some other factor, MLB Central has not quite found its audience. According to data from SportsTVRatings.com, the show was often MLB Network’s least-watched program last fall, typically drawing fewer than 100,000 viewers a day and sometimes fewer than 50,000. Nearly three years in, it’s probably time to convert all that creativity into ratings.

But it doesn’t sound as if MLB Central will try a new formula any time soon. After Tuesday’s show, I sat on set with Vasgersian, Shehadi and DeRosa, chatting about how their show came to be and what makes it work. The three praised each other effusively and proudly took credit for the show’s tone and format. Shehadi said the looseness of the show derived from the hosts’ individual personalities and joint chemistry.

“You’d be hard-pressed to know when we’re on air,” she said. “If you’re just in this studio, I don’t think you’d know.”

Later, Vasgersian brought up a recurring segment called “Point, Counterpoint,” in which analysts discuss hot topics in baseball in hushed tones under dimmed lights, with split-screen cuts meant to gently mock the debate shows that dot sports television. In one recent edition, DeRosa and guest analyst Al Leiter dutifully played their roles until Vasgersian asked about Tim Tebow. Then they cracked up.

I asked Vasgersian, Shehadi and DeRosa what show—sports or otherwise—MLB Central most reminded them of. They all thought for a few moments but together failed to come up with an analogue.