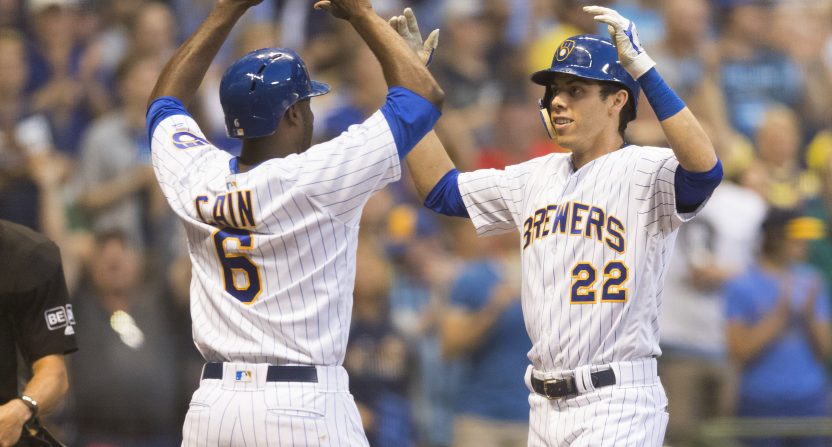 At the 2018 MLB All-Star Break, local TV ratings are flat from last year, averaging a 2.98 local rating. This actually isn’t the worst thing in the world, given that three of the top five highest-locally rated teams in baseball (Cardinals, Indians, Royals) have seen their ratings drop.

The Cardinals remain MLB’s highest-rated team despite scuffling to third place in the NL Central and firing manager Mike Matheny heading into the All-Star Break. St. Louis is averaging a 6.76 rating on Fox Sports Midwest, and is closely followed by the Cleveland Indians, who have a 6.29 average rating on SportsTime Ohio. The Boston Red Sox, who have baseball’s best record at an incredible 68-30, are up 19% to a 6.19 rating on NESN.

The Brewers have the fourth-best local ratings in baseball, averaging a 5.14 on Fox Sports Wisconsin, and also have seen their ratings grow by 46%, the third-highest spike in MLB. The Kansas City Royals still have the fifth-best local rating in baseball at 4.68, but that represents a 40% drop from last year. However, it’s a far cry from 2016, when the Royals averaged an incredible 11.70 rating.

Other teams that have seen their ratings increase substantially this year are the Los Angeles Angels (thanks to the Shohei Ohtani effect?), up 74% to a 1.65 on Fox Sports West, the Atlanta Braves (up 50% to a 3.05 on Fox Sports South and Fox Sports Southeast), the defending World Champion Houston Astros ( up 23% to a 3.78 on AT&T SportsNet Houston), and the Chicago Cubs (up 19% to a 4.13 rating on NBC Sports Chicago).

On the other end of the coin, the Oakland A’s and Chicago White Sox remain baseball’s lowest-rated teams. A’s ratings on NBC Sports California are up 12% to a 0.67 rating this season, while White Sox ratings are down 1% to a 0.83 on NBC Sports Chicago, possibly representing the absolute low point for that franchise’s ratings. Miami Marlins ratings have fallen 17% to a 1.01 on Fox Sports Florida this year, while the Angels and Dodgers (up 13% on SportsNet LA) have posted nearly identical ratings of 1.65 and 1.66 through the first half.

The Baltimore Orioles, in the midst of a potential franchise-worst season, have had the largest ratings decrease in 2018, dropping 50% to a 2.89 after years of being a stalwart in the top five of MLB’s local ratings. The same is true for the Detroit Tigers, a former pillar in the top five that has seen their ratings drop by 44% to a 3.03 this year. The last place Texas Rangers have seen their ratings fall 30% to a 2.00 on Fox Sports Southwest, while a surprising on-field campaign hasn’t helped the Tampa Bay Rays, who have dropped 20% to a 2.32 on Sun Sports.

Overall, as mentioned earlier, the league is averaging a 2.98 local rating flat from last year. 15 teams are up, 14 teams are down, and data for the Blue Jays was not available (but let’s be honest – their ratings have probably also dropped, given the team’s lack of on-field success).

Nationally, the story isn’t so rosy. Sunday Night Baseball on ESPN is down 8% to an average of 1.61 million viewers, but ESPN loves to point out that their schedule is heavily backloaded and they’re expecting stronger second half ratings. Fox’s Saturday primetime broadcasts, which have been cut back in recent years, are up 11% to an average of 2.544 million viewers. FS1’s broadcasts are averaging 420,000 viewers, a 13% drop from 2017.