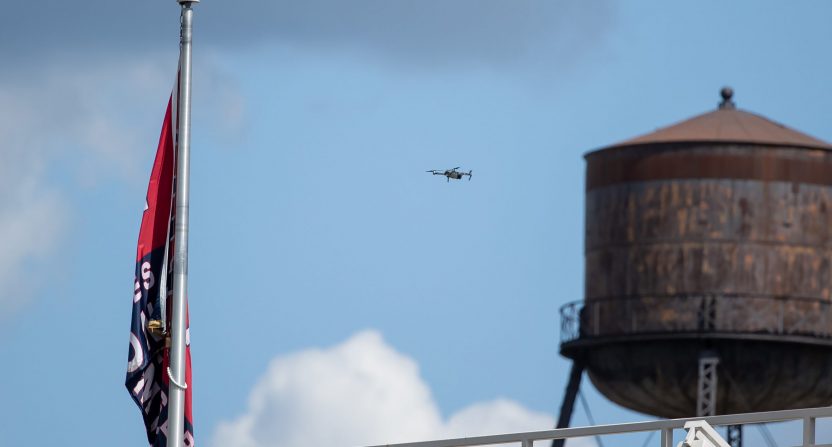 There have been five total drone delays in Major League Baseball this season from people flying unauthorized drones over MLB ballparks during games, leading to players being called off the field and to those games being temporarily postponed (including the Aug. 4 one between the Pittsburgh Pirates and Minnesota Twins seen above). That’s a concern for the league, but current federal laws limit what they can do about it.

Bill Shea of The Athletic has an excellent piece taking a look at the current status of MLB’s drone-prevention efforts. Those include several clubs hiring private companies that use sensors, cameras and tracking information to contact those flying drones over stadiums (illegal on gamedays). But on a league-wide level, MLB is also working with federal agencies for “additional help in preventing unauthorized drone flights” and lobbying Congress to let them use “more robust mitigation efforts.” Here’s more on that from Shea’s piece:

Baseball said it’s lobbying the federal government for help to counter drone incursions but declined to offer specifics of what it would like.

Here is MLB’s statement on drones: “The FAA has a Temporary Flight Restriction in place over Major League ballparks on game days, which includes a general prohibition on drone operations. Along with other impacted organizations, MLB is actively involved in discussions with the FAA, the DOJ, the FBI, Homeland Security, and other relevant federal agencies to seek additional help in preventing unauthorized drone flights over outdoor professional sporting events.

“Each ballpark has a response plan in place if an unauthorized drone flight becomes a safety or security issue, including attempts to identify the pilot of the unauthorized flight, but drones are considered aircraft and the same Federal laws restricting interference with manned aircraft currently apply to drones. There are additional Title 18 prohibitions and FCC regulations that further restrict the ability to deploy counter-drone technology. MLB is diligently pursuing appropriate federal Congressional action to legally enable more robust mitigation efforts. But in the meantime, it is important for drone hobbyists to understand that flying drones over stadiums during games is dangerous, against the law, and could subject them to criminal prosecution and civil liability. In five instances this season, Umpires have responded to these incidents appropriately and in accordance with our protocols.”

As Shea notes, aggressive approaches like jamming drone signals or taking them down with guns, energy beams, nets or other technologies falls into that camp of “federal laws restricting interference with manned aircraft.” Currently, only the federal Department of Homeland Security and the Justice Department are always authorized to shoot down drones, but that authorization can be extended to local police or the military in certain circumstances. It’s unclear if that’s the level of authority MLB is lobbying for, but the drone defense company executives Shea speaks to raise some good points on why that’s currently restricted, as just shooting down a drone or jamming its signal could cause it to crash somewhere and give you some further liability.

It makes some sense that MLB is seeing what they can do to reduce the drone delays. These have been silly and needless interruptions to games, and while there hasn’t been a particular threat to players’ safety from unauthorized drones yet, that could also be a concern. And the law is already in MLB’s favor in terms of prohibiting these unauthorized gameday drone flights; they’re just limited in what they can do in response.

But just allowing these “more robust” approaches also would seem to carry some concerns. And the existing approaches, including the drone defense companies some teams employ, seem to have some value in their own right. That’s especially true when it comes down to tracking drone signals and getting in touch with the operator. And maybe we’ll see that approach expanded going forward, and that in itself wouldn’t need any changed laws.

In any case, it’s definitely notable that MLB is also looking for “additional help” here from the government. And it’s notable that their plans include lobbying Congress to allow “more robust mitigation efforts.” We’ll see how that turns out.