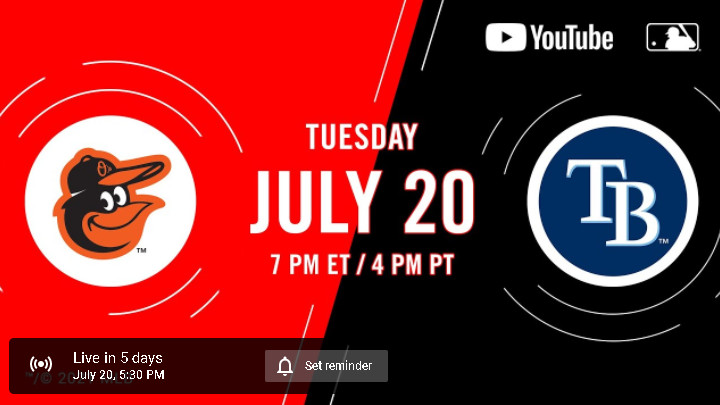 The MLB Game of the Week on YouTube broadcasts have seen some interesting changes from a normal game broadcast, and the next one is coming in who’s calling next week’s game. As per a release from MLB and YouTube, Tuesday’s game between the Baltimore Orioles and Tampa Bay Rays will mark the first time in MLB history that there’s been an all-female team calling a game. The game broadcast team will be Melanie Newman (the Orioles’ regular radio play-by-play voice since last year, she also called a YouTube game last month), Sarah Langs, and Alanna Rizzo, with Heidi Watney and Lauren Gardner hosting the pre- and post-game show. Here’s more from that release:

…“Having the chance to present another MLB Game of the Week Live on YouTube is more fun than I can explain,” said Newman. “I’m so excited to bring the game to fans alongside some of the most intelligent, powerful women in the industry. Having covered the Orioles from multiple aspects this year and the insane rise of young Tampa Bay talent, it’s an AL East matchup that can’t be missed.”

…“It’s hard to sum up how excited I am for this game, and how honored I am to get the chance to work alongside such strong, powerful and accomplished women as Alanna, Melanie, Heidi and Lauren, “ Langs said. “Getting this opportunity means the world to me – calling games is so much fun. As I always say, baseball is the best, and I look forward to sharing that excitement with everyone who tunes in.”

“It is a great honor to be included in a broadcast with so many accomplished and talented broadcasters. The fact that the entire on-air team is female shows you that baseball is a game for everyone,” said Rizzo. “I am looking forward to being a part of this historic, inaugural event but looking more forward to when this is the norm versus the exception”.

David Waldstein of The New York Times has some more on this, including some good quotes from the broadcast team:

“It can’t help but feel different,” Rizzo said in a telephone interview. “I’ve always had a male play-by-play voice in my ear during every game I’ve ever done. So, to do a game where those voices are Melanie and Sarah, that will be a unique feeling and a unique perspective of the game. It’s exciting to be a part of something like this.”

…“It shows that the world is changing and it’s more accepting of different voices and different looks and perspectives of the game,” Rizzo said. “It’s not an all-male game anymore, and we don’t live in an all-male world.”

…“Having the first female tag is something that has come up in my career,” Newman said, “and it’s something I recognize as very important. But we also want to make sure that while we are getting all these firsts in there, that we also are not the last.”

…“If hearing and seeing us inspires one more girl, one more young woman, to get into sports,” Langs said, “I will feel like that’s a mission accomplished.”

This follows some all-female broadcasts in the NFL, NBA, NHL, soccer, and more.  And many of those broadcasts have also made a point of emphasizing women in production roles. This MLB/YouTube move is a further sign of how sports broadcasts’ diversity is improving, and it’s unlikely to be the last move along those lines.