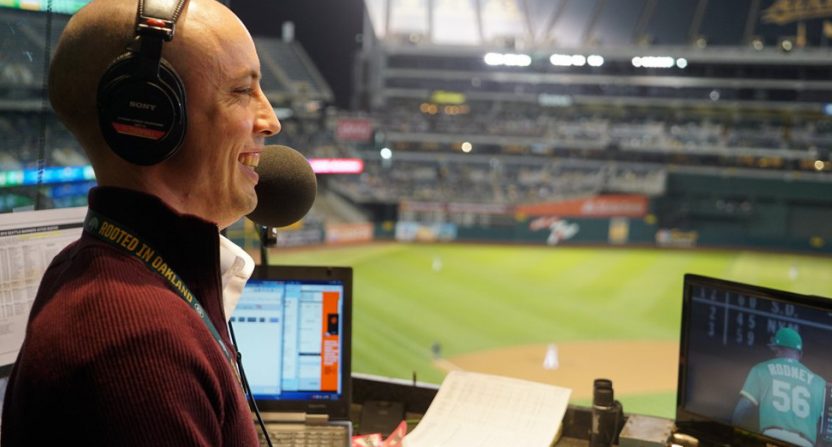 There’s plenty of talk about various long-serving minor league players who finally get a call up, but it feels rarer to see that play out for a broadcaster, especially just for one game. That’s what happened Friday for Donny Baarns, though, and part of the reason he finally got that opportunity in his 11th season calling minor-league baseball was thanks to a New York Times piece by Kurt Streeter this June. That piece profiled Baarns’s quest to make it to the big leagues and how that fits into the story of minor-league radio broadcasters in general.

Baarns has been working in minor-league baseball for a decade, calling over 1,000 games for the Alaska Goldpanners, the single-A Visalia Rawhide and, most recently, the triple-A Omaha Storm Chasers. Over the last five years, he’s also been calling A’s spring training games for their website and MLB.com. But, as Streeter chronicled in a follow-up published in the Times Tuesday, the June feature got the attention of A’s president Dave Kaval, and led to Baarns getting the call to work on an A’s-Mariners broadcast Friday:

The Oakland A’s president, Dave Kaval, provided the opportunity. Kaval, who in two years on the job has gained a reputation as one of baseball’s most out-of-the-box executives, read the Times story with particular interest. Baarns, after all, has announced spring training games over the internet for Oakland since 2014.

As he read, Kaval came up with a plan: Find a way to bring Baarns to Oakland for a late regular-season game, and let him realize his dream. There was an opening: Ken Korach, the team’s lead broadcaster, was due for a night off in late August. A few days later, the deal was done. “It was like, ‘boom, boom, boom,’ the next thing you know, this is happening,” Kaval said. “We always move quickly around here.”

…In the end, the A’s won, 7-5. Baarns led the broadcast for nearly half the game. Once it was done, [regular announcer Vince] Cotroneo gave him a warm, welcome-to-the-bigs hug. “Nice job, buddy,” Cotroneo said. “You sounded just great.”

Here are some tweets from Baarns about his experience:

So I guess we're doing this! Join @vincebaseball, Ray Fosse, and me for the @Athletics and Mariners at 7:00 on 95.7 The Game and the A's Radio Network. pic.twitter.com/30t6qZVrp4

This was awesome. Thanks again to @DaveKaval, @MattPerl, @vincebaseball, Ray Fosse, @townsendradio, and the @Athletics organization for having me. So glad I could be here for an A's win! What an experience. I'm so fortunate and blessed. pic.twitter.com/JLCKwfrlUw

Thanks Paul! Yeah, they encouraged me to do that if I wanted to. It made it more comfortable and familiar to be using my normal setup. Again, the A's were first-class about the whole thing. https://t.co/mkgFkaZLXY

Today marked the end of my 11th season in pro baseball. It was easily the most incredible yet, culminating in the chance to call a regular season Major League game for the first time. Thanks to the @OMAStormChasers, @Athletics, and so many of you for making it so special. https://t.co/aqtldWhRmK

That’s a pretty cool story, especially considering how the Times pieces mention that there are so many minor-league broadcasters who fill that role for decades and decades and never get a chance to call a major-league game. At the very least, Baarns has now done that. And by all reports, he did very well, so there may be more major-league games in his future down the road, with the A’s or another organization. But in any case, it’s awesome that he got to live out this part of his dream.

[The New York Times; photo from the A’s on Twitter]