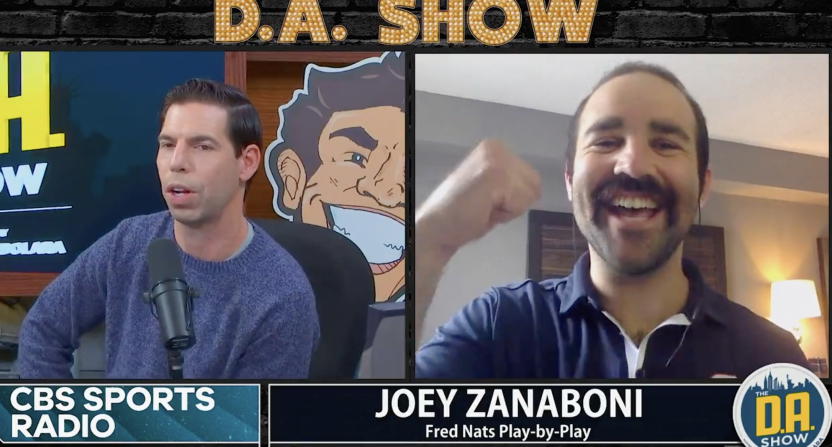 Even if you don’t know the name Joey Zanaboni, chances are you’ve run across one of his baseball calls on your Twitter feed.

Maybe you were made aware of his decibel-busting calls during the Appalachian League’s Johnson City Cardinals’ championship run in 2019.

Thus concludes the weirdest, funniest, strangest, craziest, most beautiful odyssey in all of @MiLB broadcasting in 2019. I vowed to dedicated my baseball work this year to #TheLiving. Mission accomplished. #LCRR #SoundOn? pic.twitter.com/F3IB3QC2GZ

It might have been the wild metaphors and descriptions he used while calling University of West Florida baseball games.

I want to be the first real millennial sports announcer who reflects the endless optimism, relentless anxiety and glorious randomness of this generation.

We were raised on iPhones and smart toilets and Family Guy. Mine is not a toast to the world as it was, but as it is. #LCRR pic.twitter.com/Y5fZGUrd4l

Perhaps you remember him from last year’s “melting faces like a misplaced microwave at an ice sculpture competition” call during a particularly amazing catch in a South Dakota Canaries game.

Honored to have another melting faces moment on @SportsCenter ?@therealerob_6 is an incredible shortstop, and this was the greatest play I’ve seen in @AA_Baseball. A truly special moment! https://t.co/LgT8Z4Gb1x

It’s possible you first heard one of Joey’s signature calls last month when he introduced us to a “defense cleaner than a Lysol-brand OnlyFans account.”

defense cleaner than a WHAT pic.twitter.com/85eRqUoF7f

Or maybe it was this past Tuesday when his call of a Single-A Fredericksburg Nationals home run was featured on the MLB Twitterfeed.

Listen to the most thrilling call you'll hear today and, maybe, ever. pic.twitter.com/W0h3hdTn8o

After years on the independent and university circuit, Zanaboni is finally getting some recognition beyond viral tweets. The 30-year-old was featured in a Washington Post write-up by Scott Allen this week, where he got the chance to provide some context for his reference-rich and oft-obtuse baseball calls.

“I love language as much as I love baseball,” Zanaboni told Allen. “I kind of describe what I do as a scuba diver who dives down to get scrap metal out of a river and then twists it into something different.”

It’s also worth noting that Zanaboni now finds himself within striking distance of the major leagues. Sure, there’s a fairly big gap between Single-A and Major League Baseball, and a slew of other veteran broadcasters also waiting for their call-up, but considering where he started and where he’s made his mark, the vociferous play-by-play announcer is on the right track to eventually call MLB games. At least, in theory.

“I know that some people think Joey is controversial when it comes to how baseball is supposed to be called,” FredNats General Manager Nick Hall said. “But I think baseball needs more Joey Zanabonis across the board, and I’m not just talking about minor league baseball.”

.@MrazCBS went on record today with @DAonCBS on @WFAN660 and @CBSSportsRadio to say I should be next voice of @Yankees.

That's a dream come true right there. I am the most fortunate person in professional baseball!

Now who's got a room I can rent in the Bronx??? @YankeesPR pic.twitter.com/Lfb55mRbzt

The question is, while his calls are enjoyable and certainly unlike anything else you’re used to hearing during a baseball game, is it right for the big leagues? While there’s no one calling MLB games who sounds like this, there’s also a reason that’s the case. It’s one thing to digest Zanaboni’s calls piecemeal in the form of highlights, but are big-league baseball fans ready to tune in for that every single night? In a world of John Sterlings, Gary Cohens, Dan Shulmans, and Jason Benettis, can a Joey Zanaboni co-exist?

As Allen asks in his piece, “Is there an audience in the big leagues for a broadcaster who recently shouted “Give Soulja Boy a mechanical pencil sharpener; let’s get cranked!” after a walk-off hit by Nationals prospect Brady House?”

For his part, Joey certainly thinks so.

“I think if I was a Major League Baseball announcer, whatever team hired me would quickly have the most-talked-about broadcast in America,” Zanaboni said. “I think there would be some people who bristle at it or what have you, but the popularity would be huge.”

There’s a certain endearingly ironic factor to Zanaboni’s work that draws a parallel to Philadelphia Flyers mascot Gritty or the ManningCast. On paper, it shouldn’t work. It’s too much, perhaps too packaged. And yet, they’re all so committed to the bit that you can’t help but buy into what they’re doing. And perhaps that’s how it could work.

Interestingly, Hall told WaPo that when he hired Zanaboni, he heard some concerns from people in the industry but has received “overwhelmingly positive” feedback from fans. Perhaps we’d expect the same to happen in MLB, with traditionalists and executives scoffing while the average fan comes to enjoy the unique sounds of the game. Or maybe the Chris Russos of the world would make such a fuss that it would drown out even Joey’s ear-popping calls.

Perhaps we’ll find out soon enough. But in the meantime, keep your eyes and ears on your Twitter feed, because Zanaboni will most definitely be back there very soon.

This is one of the funniest calls I've ever heardpic.twitter.com/4AbbK7t4T1