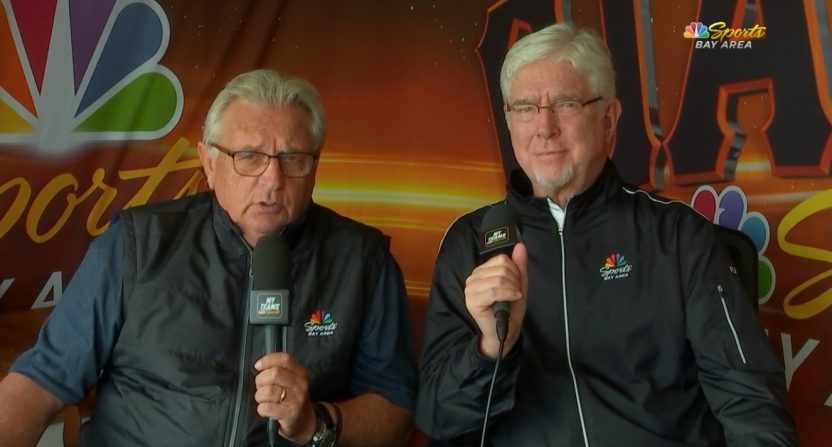 I’m not sure if there’s a more beloved broadcasting duo in Major League Baseball than the San Francisco Giants’ combination of Duane Kuiper and Mike Krukow. In our yearly MLB announcer rankings, Kuiper and Krukow have finished no lower than second, capturing the top spot three times in the five seasons we’ve done the rankings. The two have worked together for more than 25 years, and even though the Giants have began to add more broadcasters to their team in order to lighten their workloads, fans still adore the pairing.

Back in 2017, Krukow scaled back his workload while dealing with a muscle disease called myositis, which he made public back in 2014. Today, NBC Sports Bay Area announced a new two-year deal for Krukow, and some changes to his schedule with Kuiper. Krukow won’t be making any road trips with the Giants, but will call an additional 22 road games with NL West teams from the NBC Sports Bay Area studio. Kuiper will be at the ballpark for those games, and the two will call the games together with some innovative technology.

In what’s being dubbed as SplitKast, Kuiper will be calling the game from the stadium, while Krukow will watch a series of feeds from the studio. Both men will also have monitors with live shots of the other, and will FaceTime during the game.

The concept actually is relatively simple. The broadcast booth will split transmission lines and make sure both broadcasters are set up so there’s no audio or visual delay. Kuiper will have a monitor next to him in the booth with a real-time shot of Krukow back in his dedicated space in the NBC Sports Bay Area studio, and Krukow will have the same. He’ll also have access to whatever feeds he needs to take in everything that’s going on at the ballpark, along with a direct line to the broadcast truck.

Krukow and Kuiper also will use iPads to FaceTime during the game so they can have a direct conversation during commercial breaks.

Calling the game from a monitor doesn’t seem to be a big deal for Krukow, because he claims that he watches most games through the monitor to get a better view of the pitch.

Krukow will end up calling 103 games this year for the Giants – their 81 home games at Oracle Park, and the 22 road games from Dodger Stadium, Petco Park, and Chase Field (bad news for Rockies fans who love Krukow, I guess). That’s just six fewer games than he called a year ago.

Glancing over the Giants’ schedule, nearly all of those road series are in the second half of the season – the Giants start the season with road trips to LA and Arizona, and head to San Diego a couple weeks later, but don’t go on the road again to one of those ballparks until after the All-Star Break. While that’ll be good for fans who don’t want to deal with the potentially awkward broadcast, the three month gap in between remote broadcasts could make things just a bit awkward overall.

All in all, this seems like a good thing for Giants fans, and if it ends up working out well, I wouldn’t be shocked to see more teams start doing this with some of their older, beloved broadcasters.