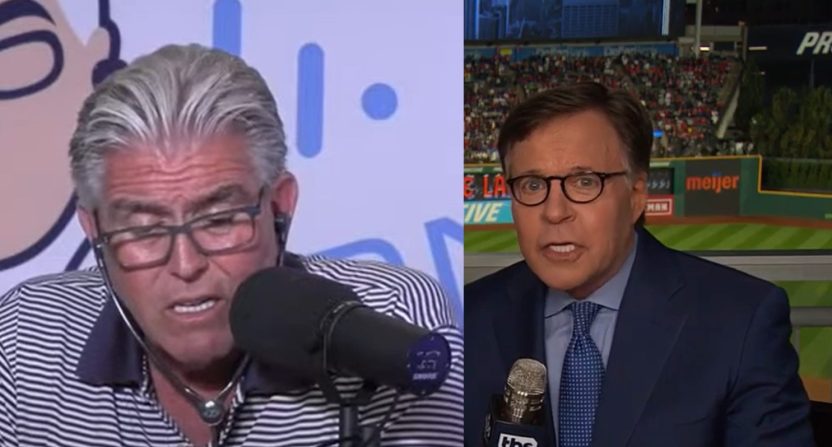 Reviews of Costas calling the ALDS matchup between the New York Yankees and Cleveland Guardians for TBS have not been great. And you can count sports radio icon Mike Francesa as one of the biggest critics.

It’s not because Costas mistook pitcher Shane Bieber for Justin Bieber. Francesa’s gripe with Costas is that he just won’t shut up.

“Costas will not be quiet,” Francesa ranted on his BetRivers podcast over the weekend. “He thinks every word is golden because he just will not shut up. Everything’s a history lesson. We don’t need a history lesson every two seconds! Everybody’s a Yankee fan, they have Yankee history, they understand Yankee history! They know it backwards and forwards! This is not a history class. It’s a baseball game. Be quiet! Do the game. He’s driving everybody crazy.”

Francesa, who’s been on a podcast tear this month, often hitting his fans with two-a-days, railed against Costas a second time after the play-by-play voice continued to be long-winded during the Yankees-Guardians ALDS Game 4.

“It’s a Game 5, it’s a dramatic series, it’s a dramatic fifth and deciding game,” Francesa said. “Let it breathe, Bob, please. You’ve squeezed this thing for all its life. It’s almost like Bob’s been locked away somewhere just dying to talk, and now you can’t shut him up.”

The irony of Francesa being the person to tell someone else they’re talking too much is not lost on anyone. But Francesa is a sports talk host, with the key word being talk, while play-by-play announcers are supposed to accent the game, not dominate it.

Francesa is not alone in his criticism of Costas, as social media has been filled with fans imploring the iconic play-by-play voice to take a breath throughout the series. Joe Buck, meanwhile, is likely seeing the criticism and enjoying his own decision to stop calling baseball games. Costas is a Hall-of-Fame broadcaster, who has called three World Series throughout his illustrious career, but his 2022 ALDS performance probably won’t be honored by Cooperstown.