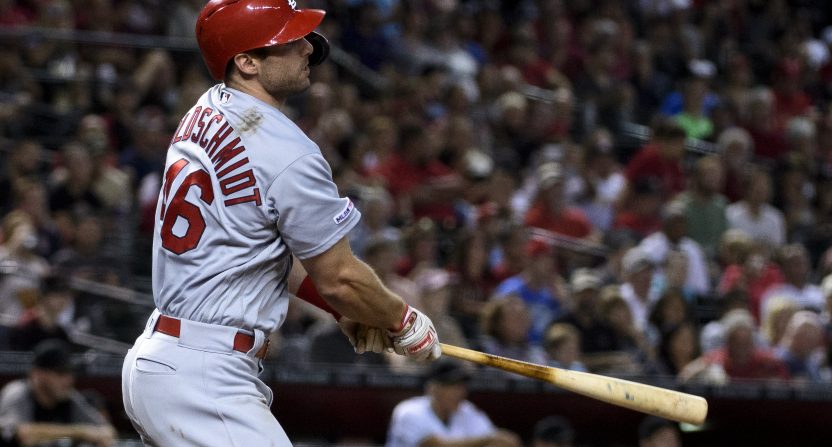 The 2019 MLB season ended a week ago, and with the end of the season comes news of the local ratings on RSNs across the country. Overall, local ratings were down 1% (which is surprising to me, given how many teams embraced the tank in 2019), with 14 teams up, 15 teams down, and data for the Toronto Blue Jays unavailable (but given their season, the Jays were probably also down).As reported by the Sports Business Journal on Monday, the NL Central champion St. Louis Cardinals led baseball in local ratings with a 6.59 average rating, though that was down 10% from a year ago, when the Cardinals also led baseball in local ratings. The Indians were in second with a 6.55 average rating, up 2% from a year ago, and they were trailed by the Brewers in third (6.37 average, up 16% from last year) and the AL Central champion Twins in fourth (6.33, up 63%, the second-highest increase across baseball). The World Champion Boston Red Sox rounded out the top five with a 5.25 average rating, down 23% (fourth-highest decrease in MLB) from the 2018 season.The Twins had the second-highest local ratings increase in MLB, but the San Diego Padres topped the charts by improving 76% from a year ago, up to a 3.76 average rating. The Cincinnati Reds (up 26% to a 5.16), Chicago White Sox (also up 26% to a paltry 0.95), and Houston Astros (up 21% to a 4.87) also posted increases of over 20%. That Astros number is shocking to me, given the numerous carriage issues the team had with AT&T SportsNet Southwest (and its predecessor, the much-maligned punching bag that was CSN Houston).On the other end of the spectrum, the A’s (0.76), Marlins (0.83), and White Sox (0.95, even with the sizable increase) all failed to post a 1.0 average rating in their markets, and the Rangers (down a league-worst 34% to a 1.17) and Angels (1.24) filled out the chart of the five lowest-rated teams locally. Aside from the previously mentioned Rangers and Red Sox, the Mariners (down 33% to a 2.63 on the team-owned Root Sports Northwest), Diamondbacks (down 24% to a 2.18), and Giants (down 20% to a 2.34) were all at least 20% this season.In a weird quirk, four of the five AL West teams were down this season, with the Astros as the lone outlier. While ratings data for all of the teams wasn’t revealed, SBJ did report on a couple of large market teams outside of the top and bottom five in both average rating and ratings change: the Yankees were down 17% on YES despite a dominant year and an AL East title, and the Phillies were up 20% on NBC Sports Philadelphia thanks to the addition of Bryce Harper and in spite of another mediocre season on the field.Of note: the Sinclair-owned Fox RSNs were home to the top four locally rated teams, and the three biggest risers this season. Then again, those networks were also hope to two of the three biggest declines of the season, and three of the five lowest average ratings.All in all, baseball is probably going to be unmoved by local ratings for the 2019 season. A 1% drop isn’t something to care all that much about, but seeing large market teams like the Yankees, Red Sox, and Giants drop and traditional midwest ratings strongholds like Pittsburgh, Detroit, and Kansas City fall out of the top five has to be disappointing, even though most of those changes (aside from the Yankees) make sense given the on-field struggles of those teams in 2019.It seems like fans will care about teams, even if they’re not all that successful, as long as they try to win (look at the Padres and Phillies as examples). Fans aren’t going to watch night in and night out if teams tank or find excuses not to spend money, and the latter case also appears to be true even if the team wins (Red Sox….hello). That’s the biggest problem with retaining and growing MLB’s local audiences in the future, in my opinion.[Sports Business Journal]