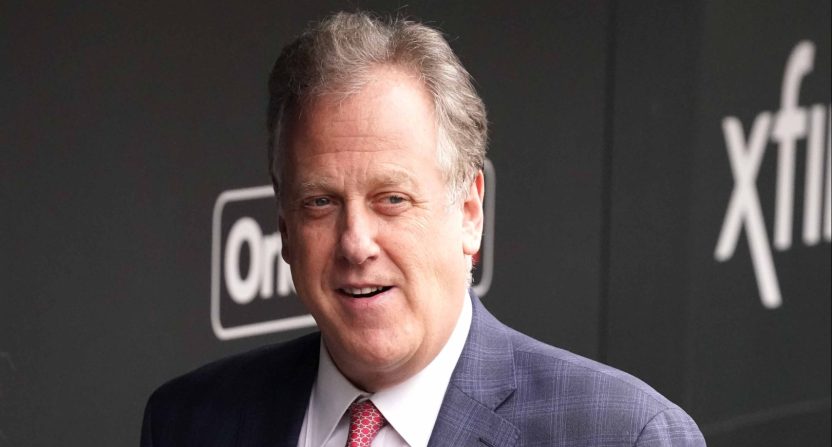 Despite the fact that Aaron Judge has yet to hit his 62nd home run of the MLB season (in spite of what SNY might say), the possibility of it happening has galvanized conversations around the way that ESPN has broadcast the chase and how YES announcer Michael Kay has called it.

There’s been much drama around the availability of Yankees games as Judge chased Roger Maris’s franchise single-season home run mark, with fans, media, and even politicians attempting to influence the networks involved and the announcer calling it.

Since then, ESPN has been subjecting college football fans to cut-ins of every Judge at bat whether they’re interested or not. And with every walk or strikeout, whatever interest might have existed is waning. All the while, Kay has been attempting to balance the historic call with the expectations that exist, the hype that precedes each at-bat, and the criticisms that are being lobbed at him, Judge, and ESPN throughout it all.

"Oh, by the way, McDonough, the tarp is on the field at Yankee Stadium."

Kay was the guest on Tuesday’s episode of “The Show” with Joel Sherman and Jon Heyman. Amongst other things, he discussed the ongoing home run chase and how the drama, hype, and criticisms are affecting him.

“Well, I would never complain because the guy is on the precipice of doing something historic and it’s fun to be able to document it,” said Kay. “But on a personal level…I look like walking death right now. It’s just exhausting.

“Every time he comes up, I have to welcome the whole country that’s tuning in. I know that college football fans in College Station are probably throwing things at the TV screen cause it’s split in half.

“In broadcasting, you call it layering. You have to layer to the point that he comes up because that’s gonna stand alone and you want it to stand alone 20 years from now. I’m running out of things to say, I really am.

Here's how it looked and sounded with Michael Kay on the Yankees broadcast call for YES Network: pic.twitter.com/gkKDwTWc68

“And the amount of scrutiny and stress on the 60th and the 61st calls, I mean, you used to just have to deal with the [New York Post’s Phil] Mushnicks, the [New York Daily News’s Bob] Raissmans, and the [New York Post’s Andrew] Marchands of the world. Now, everybody who has a phone or a Twitter account has become a media critic. ‘This is how I would have called it.’ And then Curt Schilling gets to chime in as well. So it’s been a little stressful.”

Kay noted that he thinks the chase itself is getting to Judge as well, given his struggles at the plate in recent weeks.

Again, as far as college football fans are aware, Aaron Judge is just a guy who walks and strikes out a lot. pic.twitter.com/7LKGoJ8xnO

“Over the last four games, he has missed a lot of pitches that he would normally drive out,” said Kay. “It’s probably getting to him just a little bit.”

Beyond the Judge home run chase, Kay was asked about the criticism that announcers like him face regularly and how he’s able to shut it out or ignore it. The Voice of the Yankees admitted that, truthfully, he can’t, mostly because he thinks it has an impact on his career.

“I am very, very sensitive and I’m probably in the wrong business for it, so I find it almost impossible to shut down,” said Kay when asked about whether or not he can shut out criticism from Twitter and other places. “You know, the [Twitter] eggs, with two followers, that doesn’t get me. But there are people that have thousands of [followers] that say things and you go, ‘Wow, why would they say that? Why would they force themselves into this equation?’

“I would hear people say ‘Well, why do you read what Mushnick says?’ or ‘Why do you read what Marchands says?’ And I’m telling you, the people that run these businesses, they are easily persuaded. All you have to do is plant one little germination of a seed, and one lunatic writes one thing that one boss sees, and all of a sudden they look at you differently. If you don’t believe that, you are a thousand percent wrong.

“I don’t know how many people that run networks or run cable companies, how much original thought they have. I’m sure they have a lot to get to that level. But I think they do take the temperature of the public. So, if the public is coming after you on social media, it is going to influence the way that your bosses think. I really, truly believe that.

The good news for Kay, and college football fans, is that Judge’s chase ends within the next couple of days, one way or another.

[“The Show” with Joel Sherman and Jon Heyman]