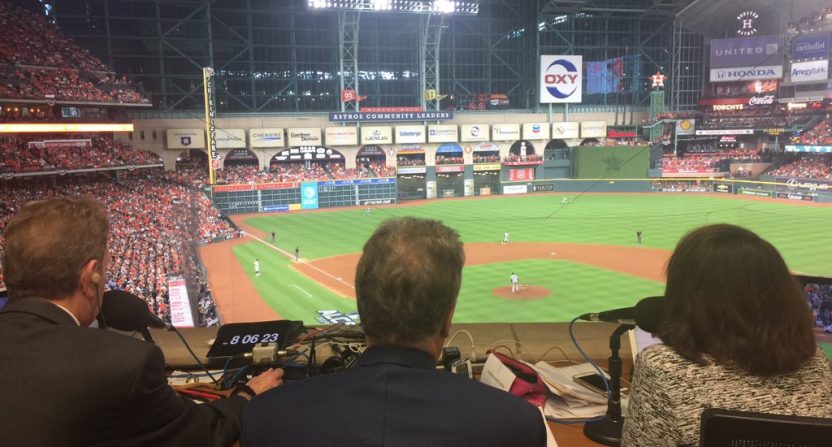 As the MLB season gets closer to crowning a champion, more and more media outlets are on-hand covering the action and depending on the stadium, it might make for some tight work spaces so everyone can fit. One such person seemingly unhappy with his seat placement was YES play-by-play announcer Michael Kay. Kay tweeted about having to sit beside colleagues John Sterling and Suzyn Waldman, who were calling Game 2 of the ALCS on WFAN.

Or so we thought…

This is how I have to watch the game. A vagrant with no place to sit. From the Yankee tv booth during the regular season to begging for scraps and living off the largesse of others — John and Suzyn — to get a seat in the post season. Sad. pic.twitter.com/qUMo4ygdRa

When it comes to social media, one can never totally tell when someone is being serious or sarcastic unless they’re clearly stating that and this is one of those times. It’s not out of the ordinary for someone in the media to complain about something trivial like this but this “complaint” also seemed a bit over-the-top that it’s realistic to believe Kay was joking.

After YES clubhouse reporter Meredith Marakovits responded to Kay that he at least had “a seat at the table,” it became a bit clearer that Kay was actually having a bit of fun. Bonus points for Marakovits for posting a pic of Kay tweeting the post she was responding to.

I mean… at least you have a seat at the table 🤷‍♀️ pic.twitter.com/1hdnp7gr7Y

Because postseason games are nationally broadcast, Kay’s job of calling games for the Yankees on YES is done for this season. Even so, because he is calling games for the Yankees and he hosts a radio show in New York City, it makes sense for him to still show up to Yankees games and cover them throughout the postseason. That doesn’t mean Kay’s upset about sitting between his radio counterparts. In fact, he seemed like he enjoyed his new seating arrangement sitting in between Sterling and Waldman.

Thank you, Brad. I have a seat. This is a better one thanks to John and Suzyn. https://t.co/nfQ95vEtHZ

Let’s just hope Michael wasn’t that surprised that social media is social media and a bunch of people didn’t catch the joke at first.