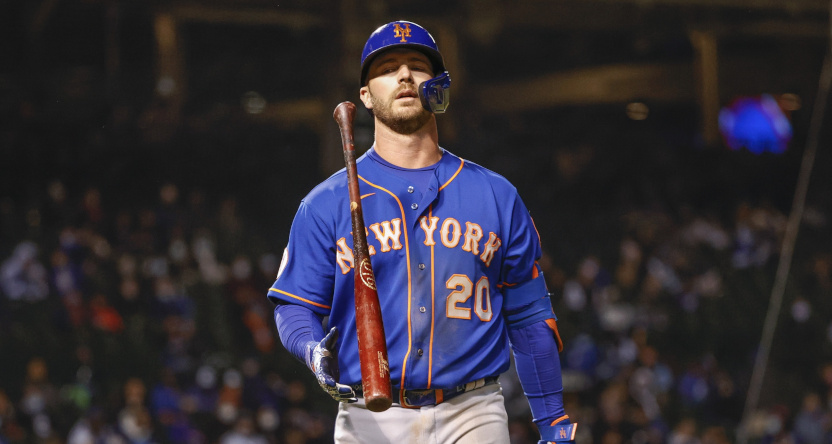 There are still a lot of media outlets that don’t like to run uncensored cursing, and that gets passed on to many of their reporters as directives even for Twitter. But it’s funny when that leads to not just the reporters, columnists or outlets refraining from cursing, but to them censoring actual quotes from players on Twitter, not even just in their actual outlets. And it’s particularly funny to see the different ways that different reporters choose to do that, especially when it comes to a very minor curse word like “shit.” Via Pete Abraham of The Boston Globe, here are Mets’ reporters Deesha Thosar of The New York Daily News, Tim Healey of Newsday and Anthony DiComo of MLB.com finding different ways to relay a “shit sandwich” comment from Mets’ first baseman Pete Alonso (seen above after striking out Thursday in a loss to the Cubs):

We give credit to Thosar here for getting three of the four letters in, but DiComo deserves partial credit for at least starting it with the proper letter. And both of those at least illustrate what Alonso actually said, as shit has a much stronger emotional connotation than poop. Healey’s “(poop)” is quite possibly the lamest way imaginable to censor someone saying shit. But it does lead to other fun imagined censorings, such as “Bull (poop),” “Does a bear (poop) in the woods?,” “Holy mother forking (poop) balls,” and “We’re about to sail into a (poop) typhoon, Randy.” It’s a good thing that Newsday wasn’t on the case for much of the usage of “shit” in history, or our world would be much less colorful.