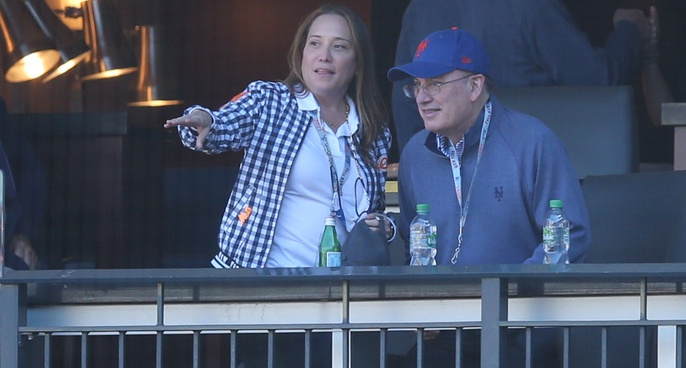 We’ve seen plenty of cases of athletes breaking news about themselves on Twitter, but it’s more unusual to see it from a team owner. Mets’ owner Steve Cohen (seen at right above with his wife Alex during an April game), though, has done that a few times, and the latest case of that came from him telling an inquiring fan that their Sunday game against the Braves was cancelled at 4:36 p.m. Eastern, almost a full hour before the @Mets account tweeted a release confirming that:

Tonight's game against Atlanta has been postponed due to inclement weather. https://t.co/eB5vuJI5jJ

This even led to a wave of reporter tweets and stories, like this one from MLB.com’s Anthony DiComo, crediting Cohen’s tweet for the news:

Tonight's Mets-Braves game has been postponed, according to Mets owner Steve Cohen on Twitter.

That's three rainouts in the last five days for the Mets, and 11 postponed games in total this season.

Of course, it’s good to see proper crediting like that, and that was the actual source here. It’s just quite unusual for important news about a team to come from a tweet from their owner rather than the team account, and in reply to someone else, no less. This may be a growing trend, though; we’ve also started to see it with firings, including with Cohen’s firing of newly-hired GM Jared Porter earlier this year.

One area where these owner tweets may be useful, and where some team social accounts could perhaps improve, is with the importance of just getting out the news on something as fast as possible. That’s quite important with game cancellations. Whether a game is on or not is crucial information to provide as quickly as possible, given that fans are often travelling from a ways away. And once the postponement decision is made one way or another, it would seem to make sense to blast that out on all team channels as quickly as possible, not just the owner’s Twitter.

Granted, this has to be done carefully. Putting out the wrong information early would be disastrous. But once the call to postpone a game is made, it would seem like that isn’t going to be reversed. And the full press release with the dates for the rescheduled games can still follow. It just seems silly for the team to wait to tweet anything on a move that’s definitively happening until they have the press release and all the further details, especially when that leads to almost an hour’s delay.

This could also be important with personnel moves, especially when it’s someone being let go for bad conduct (as those above two linked cases were). Team accounts are sometimes slow to tweet those, often again waiting until  a full statement is ready. And it makes sense to be very careful with the full statements (indeed, in the Porter case, the Mets hurt themselves by sending out a statement before they’d even read the full ESPN report). But even just the brief news of “Our team has parted ways with Person X” would be very useful to get out there on Twitter as soon as that decision is made, especially when many are criticizing the team for not doing that yet.

At any rate, some delays with team Twitter accounts are somewhat understandable. There are often multiple people involved with those accounts, and in the case of a game postponement or a personnel move, they may be interfacing with multiple other team personnel before anything gets tweeted. And there’s some merit to waiting to get things right, especially when it comes to full releases with details.

But Cohen’s tweets also show how one person who has the important information in question and is empowered enough to get it out can lead to that information getting out a whole lot faster than holding team tweets until there’s a full release. This is similar to the evolution that ESPN and many other outlets have undergone in their own reporting over the past few years, from “Don’t break news on Twitter” to the current setup where empowered reporters do often break news there, then tweet links to fuller articles later. And it would be good to see some of that change for some team social accounts, too. (Some absolutely do get their news out quickly and follow with full releases later, but not all.)

In this case, Cohen provided important information to a fan as quickly as possible, and that’s good to see. And it’s good to see an owner doing that. But it would also be nice to see some team social accounts step up in this area of providing news on the team to fans when it happens, not just waiting until they have a full press release to tweet.