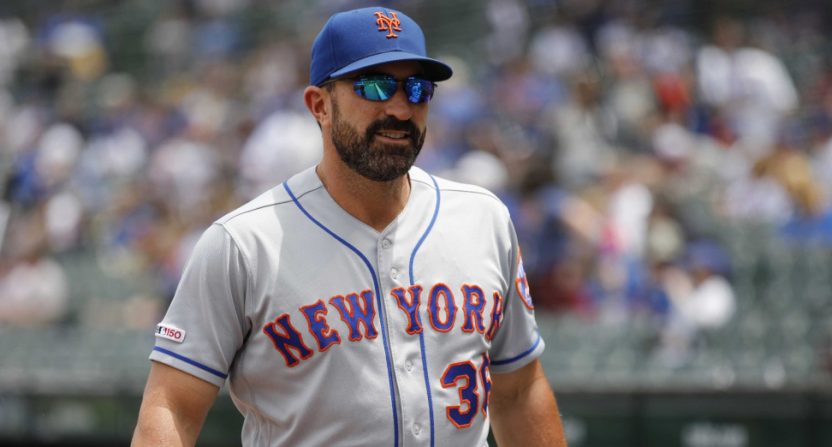 After losing 5-3 to the Chicago Cubs Sunday, the New York Mets drew more headlines for their clubhouse tirades against Newsday‘s Tim Healey, which involved manager Mickey Callaway yelling “Don’t be a smartass, motherf***er” at Healey and telling the public relations staff to “get this motherf***er out of the clubhouse,” plus pitcher Jason Vargas telling Healey “I’ll knock you the f*** out, bro.” But despite the national condemnation for that, the Mets seemed largely undeterred Monday; general manager Brodie Van Wagenen announced fines but no suspensions, both Callaway and Vargas didn’t apologize at first, and Callaway downplayed his rant as “part of this game” and compared himself to former MLB manager Billy Martin:

“The Mets organization does not condone the behavior that took place, we are committed to a healthy work environment,” said Van Wagenen. “The incident was disappointing and regrettable on many levels. We have decided to fine both Mickey and Jason for their roles in this incident and at this point we’re ready to move on.”

Van Wagenen said (Callaway and Vargas) understood their roles in the incident and accepted their fines. The GM said neither would be suspended. He said he remains confident in Callaway’s ability to do his job and that the organization had been in touch with Major League Baseball about the Mets’ response to the situation.

“To weigh in on what we thought about doing would be inappropriate,” said Van Wagenen. “We’ll let the actions speak for itself. Frustrations were high. In a leadership position, (Callaway) can’t lose control and he knows it’s something that shouldn’t happen and it won’t happen again.”

Meanwhile, Healey gave his side of it in a conversation with colleague David Lennon, where he revealed that owner Jeff Wilpon called him to apologize:

“Jeff Wilpon called me [Sunday] evening to apologize on behalf of the organization,” Healey said during a telephone interview. “He stressed the fact that I should feel comfortable being able to do my job at the ballpark and that moving forward, there’s no reason for me to feel uncomfortable. I appreciated that sentiment from him, absolutely.”

Callaway was peppered with questions from reporters regarding the decision to stick with Lugo rather than use closer Edwin Diaz earlier than the ninth, and after the testy exchange wrapped up, Healey headed to the main part of the clubhouse with the other reporters.

“Mickey came out of his office, dressed, and I thought he was leaving for the day, so I said, ‘See you tomorrow, Mickey,’ ” Healey said. “And then he said, ‘Don’t be a smart-ass.”

Healey said he was told by other reporters that Callaway continued to curse at him. Healey said he did not hear that because he was “10 feet away at that point.”

…“I was shocked, and at the same time trying to tell Vargas or Callaway or Ethan, ‘Hey, I didn’t mean anything by it,’ which might have been interpreted as aggression on my part. I was in no way trying to be aggressive or antagonistic or anything. At that point in the day, I want to talk to Diaz and then leave, you know?

“What’s the point in me trying to pick a fight?”

There definitely wouldn’t seem to be any reason for Healey to particularly antagonize Callaway and/or Vargas here, and it seems that this all stemmed from Callaway taking “See you tomorrow” as some sort of sarcastic reference to his on-the-hot-seat status. (The Mets are 37-40 this year after a 77-85 mark last year in Callaway’s first season in charge, and there have been plenty of questions about his future.) But Healey’s comment that he didn’t say it in an obnoxious way or mean it as a shot at Callaway seems to be supported by other media members’ accounts, so this just seems like an incredible overreaction and incredibly thin skin from Callaway and Vargas.

And the later reaction of no-to-limited apologies from Vargas and Callaway wasn’t great, either. For the record, Callaway did later say he apologized to Healey, and he sort of apologized in general. But that was still pretty limited:

Obscene rants against a media member are bad enough in the first place, but the push to throw Healey out while he’s trying to do his job is worse, and that fits with another New York team’s recent ill-advised attempt to restrict access. And Vargas threatening a media member with physical violence is worse still. And while the fines and “disappointing” statement from Van Wagenen are some progress, neither Callaway or Vargas seem to have really learned from this. Hopefully something like this won’t happen again, but the guys at the center of this don’t seem to really see the problem with their behavior. And that’s not such great news for those covering the Mets.