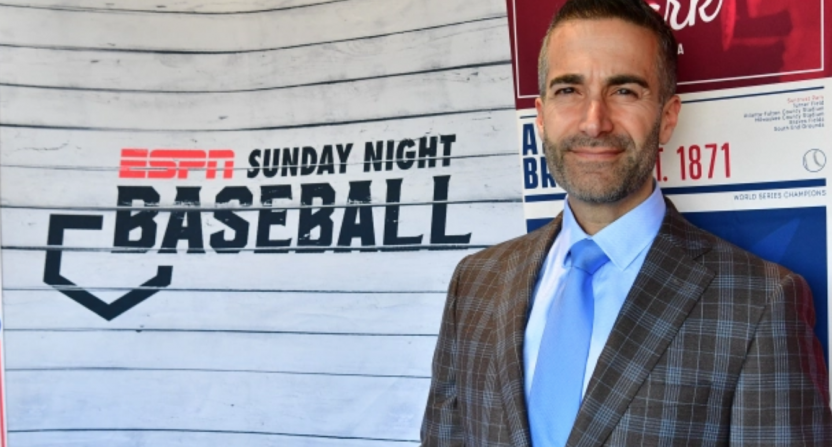 If Major League Baseball (or any other team sport) is played during the rest of 2020, it seems likely that those games won’t take place in front of fans. The discussion of what those sports might then look like on TV, at least with the NFL, has largely focused on adding crowd noise to the broadcast or possibly virtual fans.

But if only essential personnel is allowed at the ballpark, will broadcasters be on site to call the game? The NBA is considering using robotic cameras if its 2019-20 season is resumed to limit people in the arena. And under those circumstances, broadcast teams will likely be working from remote locations as well.

ESPN’s Sunday Night Baseball play-by-play announcer Matt Vasgersian addressed that possibility with Jon Zaghloul of Sports Talk Chicago/WCKG this week. (The full podcast is 42 minutes, but the conversation about remote broadcasts begins at the 18:o5 mark.) Will Vasgersian be calling SNB with Alex Rodriguez from their respective homes?

“I haven’t been told anything about that as a final answer,” said Vasgersian. “But I’m kind of working under the impression that we will not be at the ballpark. I’m just kind of drawing that conclusion on my own if they’re going to try to limit the number of people at the events.”

Maybe Vasgersian and A-Rod broadcasting remotely could end up adding something to the Sunday Night Baseball telecast.

ESPN has been doing remote broadcasts for its KBO (Korean Baseball Organization) coverage and the setup has allowed announcers like Boog Sciambi to show some personality and add a bit of color to the telecasts. Additionally, each broadcaster working from remote locations makes it easier to show the announcers on TV and add guests to the broadcast.

Vasgersian doesn’t feel calling games from an off-site location would be a huge adjustment, having worked under similar circumstances calling less popular events during the Olympics for NBC.

Later in the conversation (30:44 mark), Vasgersian and Zaghloul talk about the changes in the Sunday Night Baseball booth with Jessica Mendoza being reassigned, a move the network framed as a promotion for Mendoza. The question now is whether or not there will be a 2020 MLB season and we’ll see that two-month booth call games on Sunday nights this summer and fall.

Related: ESPN is continuing with remote college basketball broadcasts this year for more than 200