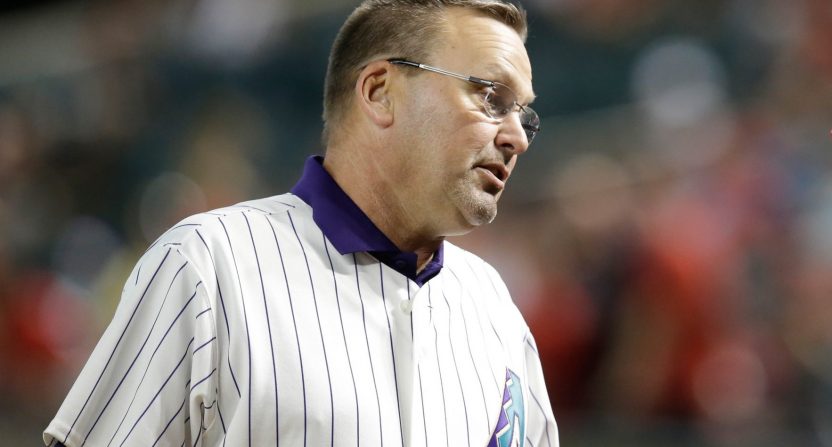 Mark Grace was trending on Twitter this afternoon thanks to his middle-innings cameo as the third man in the Marquee booth.

Initially announced in January, Marquee’s idea to have a rotating cast of guest broadcasters join Len Kasper and Jim DeShaies. It was a bad idea from the start; Kasper and DeShaies are one of the best broadcasting booths in baseball, and saddling them with a wide, odd lineup of guests seemed very unnecessary at best.

The only consistently good thing about the Cubs is the viewing experience, so I'm glad the organization is disrupting it too. Just fantastic stuff! https://t.co/hePvCc9mhd

In practice, this ended up being mostly shelved so far thanks to Covid-19, but Mark Grace and Ryan Dempster have still made appearances. Here’s how an earlier appearance from Grace went back on August 3rd:

If you were ever curious what it would be like to listen to a tipsy Crash Davis call a baseball game… the Cubs bring you Mark Grace.

Today, though, the Diamondbacks studio analyst and longtime Cubs first baseman picked a key moment in Chicago’s game against Milwaukee to launch into a story about his ex-wife parking in Bud Selig’s parking space, in which Grace referred to her as a “dingbat” multiple times. It was bad!

This is why Cubs great Mark Grace is trending pic.twitter.com/5M857OqFfU

Grace also made a “joke” about how he’d go “Archie Bunker” on her.

As soon as I heard Archie Bunker come out of Mark Grace's mouth, I knew this was not going to go well. It was a Train Wreck and God Bless Len & JD because all they could do was listen. https://t.co/aSgV0aQkRL

You’d have to think that the people at Marquee view this as a feature, not a bug. (And considering both Cubs ownership and who they partnered with for the network, it’s not hard to believe.) Why else would they invite Grace on? This is what he is. It’s especially ironic given the decision to put Kasper and DeShaies in suits and ties regardless of the weather.

“You know who could really add class to our broadcast? The slumpbuster king.”

It obviously didn’t go over well with a lot of viewers, despite Grace’s longtime history as a fan-favorite.

I cant be the only person who wishes Mark Grace wasnt a regular on the marquee broadcast. I miss the 9 innings of len and jd banter. They dont need a third.

I had to rewind and turn on the closed captions to make sure I heard Mark Grace correctly @WatchMarquee pic.twitter.com/tXieg6QYJt

Cubs fans want to hear Len and JD on the broadcast. They have been the staple for Cubs baseball on TV for years. No one wants to hear Mark Grace ramble on about his ex wife calling her a “dingbat” while the Cubs are playing.

He was able to get away with his stuff in the past, and in a smaller market.

Much of his stuff today will not fly (and for good reason), and especially on a major regional network. https://t.co/kcftoX1e8M

It was gross! Even if his story had been, you know, not wildly sexist at best, it was completely irrelevant to the actual game being played, and it forced Kasper and DeShaies to try and call the actual game around him while also being way more indulgent than they needed to be.

If there’s one positive, it’s that the swath of Cubs fans with providers that don’t carry Marquee were actually the lucky ones today.

Update: Mark Grace issued an apology after Saturday’s game (via the Chicago Tribune):

“During today’s game I referred to my ex-wife in a way that I absolutely should not have. I want everyone to know how very sorry I am about that. My remarks were offensive and inappropriate, and I deeply apologize.”

There are rumblings Grace won’t be on the next five Marquee broadcasts because of what he said. Paul Sullivan of the Chicago Tribune tweeted, “Word on the street is Mark Grace will be off Cubs broadcasts the next five games for inappropriate comments on his Ex.”

Word on the street is Mark Grace will be off Cubs broadcasts the next five games for inappropriate comments on his Ex. pic.twitter.com/UKWRNVjFQ5