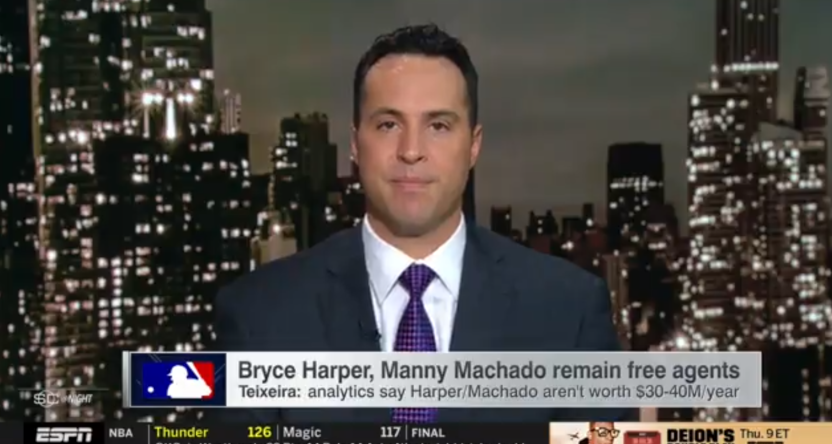 Theoretically, analysts are supposed to tell us not just what happened or is happening, but also why. Not all analysis actually lives up to that, and not all analysts do either, but it feels particularly odd when a high-profile SportsCenter breakdown of a situation ignores a key element of the discussion around it. But that’s what happened with ESPN MLB analyst Mark Teixeira in a segment on as-yet-unsigned free agents Bryce Harper and Manny Machado Tuesday night, where he blamed their ongoing free agency on “analytics” and didn’t address the discussion of potential collusion that’s become a key part of that subject. The full segment doesn’t appear to be online, but here’s the key part:

“There’s two things that are being said right now about Harper and Machado. While these two are great players, the numbers just don’t say they’re worth 30 to 40 million dollars a year. Plus, the fact that at 32, 33, the decline of players, that’s when it’s starting to happen now, players aren’t on steroids and getting better into their 30s, so they’re saying, ‘Okay, well, I’m willing to pay you $25 million bucks for maybe seven years,’ that doesn’t get close to what these guys are looking for in free agency.”

Look, the increased front office recognition of age curve effects and the problematic outcomes of several recent big contracts are likely part of the situation here, but Teixeira’s decision to talk about just those elements appears to be missing part of the story. And that’s especially true when you drop just a vague “the numbers just don’t say they’re worth 30 to 40 million dollars a year” without specifying what numbers you’re talking about, as most of the numbers do seem to justify that Harper and Machado are similar to or better than other players who have been paid in that range. (Also, complaining that they might produce at a lower level at 32 or 33 feels disingenuous considering that that assumption has been baked into many of these contracts for years, that it hasn’t stopped teams in the past, and that there are still several years of presumably-peak Harper and Machado before they even hit 30.)

Per Spotrac, seven MLB players made $30 million or more last year, with three more at $28 million or above. Only three of those players (Mike Trout, Max Scherzer and Justin Verlander) were in the top 10 in FanGraphs’ calculation of wins above replacement in 2018. Granted, Machado and Harper weren’t there either, producing 6.2 and 3.5 WAR respectively, but Machado was 14th, well ahead of top-10 salaried players like Albert Pujols ($28 million, -0.2 WAR), Miguel Cabrera ($30 million, 0.7 WAR) and Yoenis Cespedes ($29 million, 0.9 WAR).

Of course, Cabrera was done for the season with a biceps injury in June and Cespedes was shut down with a heel injury in July, so their WAR numbers aren’t for a full season, but having either Machado or Harper (both 26, so much younger than those others) for the price of $30 to $40 million annually would look considerably better than any of those guys right now, and it would look considerably than numerous other players high on the salary list. So just saying “the numbers just don’t say they’re worth $30 to $40 million a year” doesn’t seem accurate, and there doesn’t seem to be any particularly reason why Harper and Machado shouldn’t be paid in that range, unless the market has fundamentally shifted away from what got those other players their deals. But Machado and Harper aren’t getting those offers.

So, that leads to the discussion of potential collusion to keep free agent offers down. MLB lost two collusion grievances in the 1980s and settled a third, so there’s a history here, and the topic of collusion is at least being talked about in most analyses of why top free agents Harper and Machado still aren’t signed weeks from the start of spring training. There’s been no firm proof of any direct communications between clubs to lowball these players yet, so it’s just talk at this point, but it’s an important part of the discussion. Consider what Michael Powell says on the topic in a New York Times piece about MLB’s down free agent market published Tuesday, titled “Why Isn’t Anyone Bidding for Bryce Harper and Manny Machado?”

The Cubs, the Yankees, the Dodgers, the Giants, the Cardinals, the Braves, the Rangers and the Angels — all have apparently passed on making a bid for Harper and Machado. Each franchise is owned by a wealthy man (or family) in a wealth-laden sport and all could presumably find a place in the lineup for one of these young stars. And yet for the second season in a row, at a time of the off-season when the best free agents typically would have already signed handsome new contracts, most owners have tucked away their wallets and claimed to need no more talent.

…The Major League Baseball Players Association projects at least 12 of baseball’s 32 teams will start 2019 with a “substantially lower payroll” than 2018. Only four or five are expected to show a significant increase. “Players are well past ‘concerned,’” Bruce Meyer, the union’s director of collective bargaining, told me. “At a time when industry revenues and club valuations are growing for the second straight off-season, an alarming number of clubs are declining to compete for the many talented players.”

…Baseball drove down a road that looked suspiciously like this one between 1985 and 1987 and that ended in a multicar collision with three separate findings that its owners had engaged in illegal collusion to hold down player salaries. The owners paid penalties of $280 million plus interest to the players, and in the 1990s the sport weathered brutal strikes that owed to the residual bitterness.

The former baseball commissioner Fay Vincent, appointed by the owners and no Marxist, was moved at that time to remark to the owners: “The single biggest reality you guys have to face up to is collusion. You stole $280 million from the players, and the players are unified to a man around that issue, because you got caught and many of you are still involved.”

I possess no proof the current generation of extremely rich owners have acted as stupidly as their predecessors. For now the flaccid free-agent market is simply … odd.

And that’s a much better overall look at the situation than what Teixeira offered. Powell’s piece also explores some of the explanations offered by others, including a growing unwillingness to sign long-term deals after the failure of the Pujols one, plus the official MLB argument that there’s no overall decrease in what the owners are paying the players as a whole (although there are definitely some holes that can be poked in that), and it doesn’t firmly accuse MLB teams of collusion, but it brings up that idea and makes the case that at best, a whole bunch of teams have all decided independently that they don’t actually need top free agents. And Powell’s hardly alone there; this is how most serious analysis of the Harper-Machado situation has gone. But not on this particular edition of SportsCenter, where we instead saw Teixeira offer a vague “analytics” argument that didn’t have much to back it up. (And can we just point out that Teixeira himself signed an eight-year, $180 million contract with the Yankees in 2008, when he was 28 and when baseball revenues and contracts were lower in general? Good thing he wasn’t around then to argue against signing himself on SportsCenter.)

Look, no one’s expecting Teixeira to be the intrepid reporter who breaks a collusion story wide open, or even to have him directly accuse baseball of collusion. And we know that ESPN frowns upon claims about rights partners that aren’t thoroughly proven; if you can’t say that Roger Goodell’s a liar, you probably can’t say that baseball’s colluding to keep the Machado and Harper contracts down. But there are ways to at least mildly address the idea, even without mentioning “collusion” itself.

Even just a “the players’ association isn’t happy about what appears to be a lower market for free agents despite no corresponding revenue decline” would have sufficed, and that wouldn’t even make it Teixeira’s opinion. And if he really, truly believes that “analytics” are the reason these players aren’t signed, he could bring up the players’ association’s comments and then try to refute them, arguing just what “analytics” indicate that. But that’s certainly not a conclusion held by a lot of analytics-emphasizing writers, and it’s certainly not the main narrative out there about why Machado and Harper haven’t been signed yet. And Teixeira billing “analytics” as the obvious scapegoat while neglecting to even address the collusion elephant in the room made for an odd segment, and one that was a disservice to ESPN viewers.