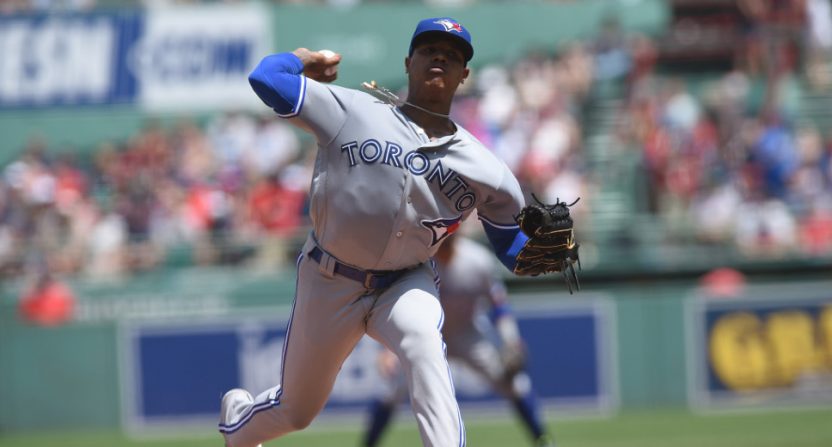 The Toronto Blue Jays went into the All-Star break in inauspicious fashion Sunday night, losing 5-2 on the road to the Boston Red Sox and creating a media controversy in the process. That controversy came around starting pitcher Marcus Stroman, who allowed four runs in five innings in that outing. Afterwards, Stroman answered questions on the game, but then got ticked off when Sportsnet’s Arash Madani asked him about beginning his Jays’ tenure with the short-season A-ball Vancouver (B.C.) Canadians at Nat Bailey Stadium back in 2012.

Here is a snippet from today's post-game fireworks. Full story in the link below.

And Steve Buffery of The Toronto Sun also covered Stroman’s reaction, and noted that he did previously praise his teammates:

Stroman declined to answer the question calling it “irrelevant” before walking away. After a few seconds, he turned around and began yelling at the reporter, pointing out that the Jays had just lost to the Boston Red Sox and that his team is “f—— terrible.” The question had to do with his breaking into pro ball with the short season class-A Vancouver Canadians in 2012.

…Interestingly, just prior to his tantrum, Stroman defended his teammates when asked about their sloppy play behind him.

“My team picks me up a ton,” he said. “They pick me up all year. I should be able to pitch better in times like that when my team doesn’t have my back. Because they’ve had my back a ton of times. So, love my guys on my team and like I said, I would go to war with them any day.”

Stroman wasn’t happy with the initial media coverage of the incident Sunday, taking to Twitter to post a note:

With regards to my post-game today. @BlueJays ?? pic.twitter.com/CX2YXPGKd4

On one level, Stroman is somewhat right; it’s unfortunate for him that the “We’re f***ing terrible!” part of this got the most attention initially, as that doesn’t cover his previous praise for his teammates and doesn’t necessarily show the whole picture. And that can be read as him going after his teammates in a harsher way than when the full context of the quotes was seen, and it could potentially lead to problems for him in the clubhouse. But that doesn’t excuse his behavior or his comments; if you don’t want people to print that you said “We’re f***ing terrible!”, don’t say it in the first place. And of course that’s the most newsworthy one of these comments, even if seen in the light of context. And it’s interesting that his note doesn’t apologize and blames the media, calling them “ridiculous” and talking about “what words are spun.”

While it’s understandable why Stroman  might not want to answer a question on an unrelated topic in the moments after a loss like this, it’s also understandable why Madani asked it.  Griffin notes that Madani waited until the questions on the game were done, that the question was for a different video story focusing on the Canadians and Nat Bailey Stadium, and that Stroman only participates in media interviews after his starts. So while it makes sense that Stroman might not want to talk about something from six years ago after a tough loss, he’s being asked that at that point because of his own approach to the media. And even if he didn’t want to discuss it then, there are plenty of ways to address that without creating a controversy, even down to just “I’m sorry, I don’t want to talk about that right now; might another time work?”

It’s unfortunate that Stroman’s rant was seen by some as more of an attack on his teammates than they appear in their full context, but he’s the one who created the story with his behavior and with his own approach to interviews. And his own defense here led to some fans on Twitter going after reporters, and to at least one reporter (MLB.com’s Gregor Chisholm) feeling the need to stand up for beat colleagues:

At any rate, this isn’t a particularly good look for Stroman. Frustration’s understandable after a loss like this, and no athlete’s ever compelled to answer a question. But he chose a poor way to respond to that question and to argue about it being asked in the first place, and he did so in a way that made further headlines he didn’t like. And he then doubled down by blaming the media and their coverage of his rant. He’s far from the first baseball player to go after media members (for example, former Blue Jay David Price made plenty of headlines for that just last year), but his decision to do so here doesn’t look like a smart one.