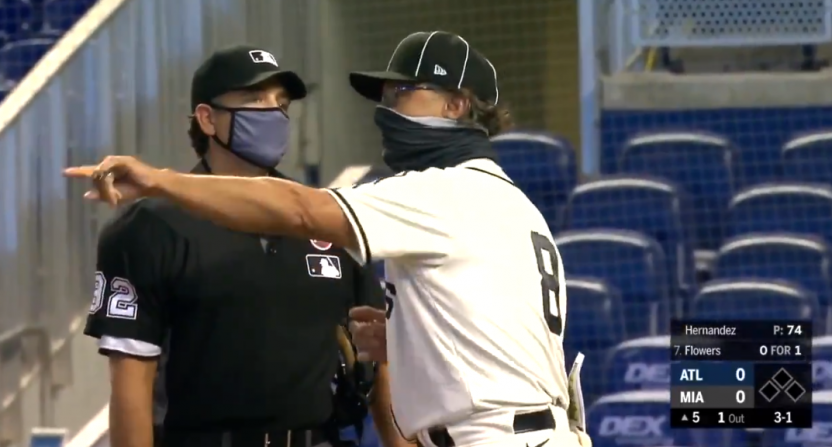 Fake crowd noise has helped liven up empty stadiums at least a little bit during sporting events, but another reason television networks are in favor of the noise is because it’s much easier to hear what athletes, coaches, and officials are saying when there’s silence in empty stadiums (and with hot mics).

And, newsflash: there’s plenty of profanity used by athletes, coaches, and officials during sporting events. That may not matter to you and a large percentage of viewers, but it matters to the league and networks (especially when none of these networks are HBO). So, their hope is that crowd noise, stadium sounds, and announcers chattering can block out at least some of the swearing.

Well, during Sunday’s Major League Baseball action, there were F-bombs heard on television broadcasts across the league.

Miami Marlins manager Don Mattingly was ejected after directing plenty of F-bombs at the umpires during Sunday’s game against the Atlanta Braves. Via the Fox Sports South Braves broadcast:

Don Mattingly gets thrown out of the game, but not before he has his say. pic.twitter.com/45nZH7GigC

In Baltimore, the Washington Nationals were quite upset with home plate umpire Will Little during a game against the Orioles. Washington manager Davey Martinez came out to argue with Little, and hitting coach Kevin Long was ejected after saying, “You’re fuckin’ horseshit! Horse. Fuckin’. Shit.” Via the MASN Nationals broadcast:

Yes, we can hear you loud and clear. ? pic.twitter.com/zmvrZ8v1Wm

Davey Martinez and Kevin Long: NOT thrilled with Will Little’s strike zone during that Soto AB. And we could hear allllll of it. One of the only benefits of not having real crowd noise.

During the Detroit Tigers game against the Cleveland Indians at Comerica Park, Tigers manager Ron Gardenhire was ejected. Umpire Tim Timmons told Gardenhire to “get the fuck outta here!” Via the Fox Sports Ohio and Fox Sports Detroit broadcasts:

Ever wonder what it actually sounds like when an ump ejects someone? Glad you asked!

Umpire Tim Timmons got caught on a hot mic when ejecting Ron Gardenhire and it is priceless. (Audio up!)#Indians #Tigers pic.twitter.com/wXcV427cUX

"Get the f*** out of here!" – Oh how I've missed Gardy ejections… pic.twitter.com/ZlvwwZW1BK

And that’s all just from one day of baseball!

So, this is the new normal on MLB broadcasts. Don’t be surprised if the artificial crowd noise gets a bit louder as the season goes on.