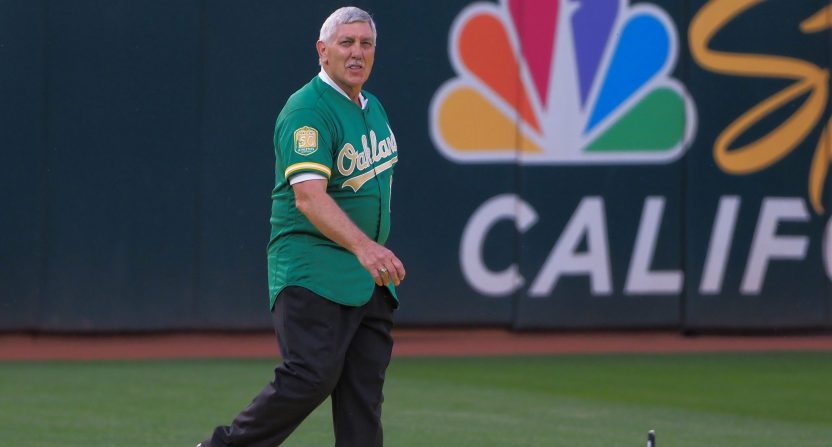 Ray Fosse — longtime Oakland Athletics broadcaster and two-time World Series champion as an MLB catcher — died on Wednesday after a 16-year battle with cancer. He was 74.

It's with immense sadness to announce the passing of Ray Fosse. Our thoughts are with the entire Fosse family, A's organization and the fans. pic.twitter.com/hEOl9HxIZm

On Aug. 5, Fosse announced that he had been silently battling cancer for 16 years, and that he would step away from the broadcast booth to focus on his treatment.

Statements from Ray Fosse, the A's, and NBC Sports California. We send our unconditional support to Ray. pic.twitter.com/yIe5QVx962

In 1986, he joined the A’s broadcast booth and turned that into a 35-year post-playing career as an announcer for A’s games (32 years on television), with the last 18 years alongside play-by-play man Glen Kuiper.

Here’s some reaction to the news from the baseball world:

I’m so sorry to learn that Ray Fosse has died. I learned as much or more baseball from him over 25 years than maybe anyone else in the game. His tremendous insights and his passion for the A’s will be so missed. A very sad day for the organization and for Major League Baseball.

Ray Fosse was a part of my baseball childhood and getting to meet him as a professional later in life was an honor. I’ll never forget the kindness he showed to my boys after their father passed or that he always asked about them when I saw him. https://t.co/GdDXUfGQ88

Heartbroken to hear of baseball legend Ray Fosse’s passing. He was so fun to be around. I’ll always remember his powerful handshakes, positive energy & his storytelling – he had a way of making you feel connected to the history of baseball and the Oakland A’s. We’ll miss you Ray. https://t.co/YObJU6NS30

Tough news to digest. Ray Fosse was always great to me. Enjoyed talking ball together. Spent many lunches on the road with him hearing stories from back in the day and learning about the game, particularly from a catcher’s perspective. RIP to a legend. pic.twitter.com/1FbbromQx9

This is just awful. Ray Fosse was simply one of my favorite people in baseball. He had an incredibly hard handshake and an especially easy to like personality. Whenever the Mets and A’s played he would have me on his pregame show and we laughed through the entire interview. RIP. https://t.co/Mepc68WS4J

Such terrible news. Ray Fosse, synonymous with A's baseball since the '70s, has died. Well respected and liked around the game, a friendly face and voice at the ballpark, always willing to share his knowledge and stories. He'll be missed by all.

I can’t think of a better A’s storyteller than Ray Fosse. He was one-of-a-kind and will be missed.

So sorry to hear about the passing of Ray Fosse! I knew him as a rival and friend. Loved baseball so much and he always had the biggest smile and strongest handshake! He will be missed!#RIP @masnOrioles

Dammit someone just told me #rayfosse passed away. I know he was battling cancer but this is the worst news. What a wonderful man! @Indians @Athletics