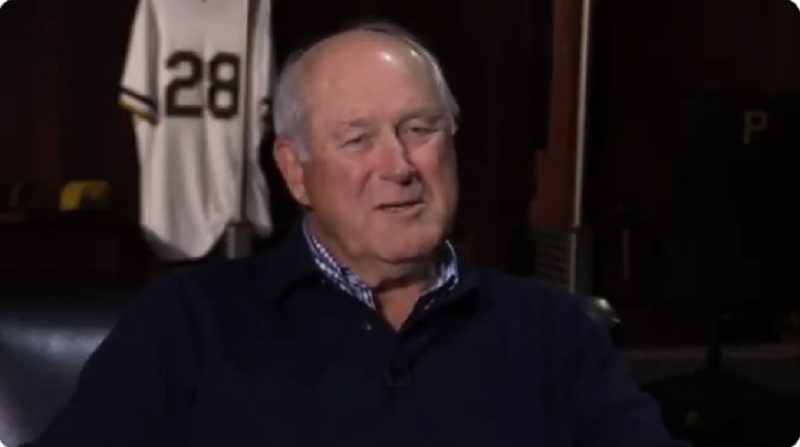 On Tuesday, long-time Pittsburgh Pirates broadcaster Steve Blass announced that he would be retiring following the 2019 season, his 60th with the Pirates organization.

Longtime Pirates broadcaster and 1971 World Series hero Steve Blass announced today that he will retire from the broadcast booth at the conclusion of the 2019 season.

Throughout the year we'll celebrate Steve's 60th season with the organization. #Blass60 pic.twitter.com/fiBFn1SJkY

The 76-year old Blass was signed by the Pirates as a player in 1960. He spent his entire ten-year career in he majors with the team, making the 1972 NL All-Star Team and finishing as the runner-up in NL Cy Young voting. He started (and won) two games for the Pirates in their 1972 World Series triumph over the Baltimore Orioles, and after his retirement as a player, joined the team’s broadcast crew in 1983. Since 2005, he’s worked Pirates home games and select road trips, and the 2019 season will be his club-record 34th year as a broadcaster for the Pirates.

Here’s a statement from Blass, released by the Pirates.

“Sixty seasons with the Pirates, one organization in one city, I am so very proud of that. It ranks right up there with anything I have ever done on the baseball field. It has been a wonderful run,” Blass said. “My wife, Karen, and I felt that it was time to step away from my broadcasting duties in order to have more time to spend together and with our family and friends. I have spent many years driving by the roses, but now it is time for me to stop and smell the roses. I am very much looking forward to the 2019 season, as it will be special for me in so many ways.”

And a statement from Pirates owner Bob Nutting, who’s owned the team since 2007.

“Steve is as synonymous with Pirates baseball as anyone in the history of our organization. Steve leaping up into the air following the final out in his second complete-game victory of the 1971 World Series is one of the most iconic moments in Pirates history,” Pirates chairman Bob Nutting said. “For 60 seasons, Steve has represented the Pirates with humility, grace, pride and passion. Words cannot express how appreciative we at the Pirates organization are for his dedication or how beloved he is and always will be.”

The Pirates plan on honoring Blass all season, including on September 28th against the Reds with this dual player/broadcaster bobblehead.

This season we have ? Bobblehead Nights at PNC Park including a Steve Blass player/broadcaster bobble in honor of Steve's 60 years with the Club! #NationalBobbleheadDay

I don’t have much of an opinion on Blass, as someone who lived on the fringes of Pirates country in Pennsylvania and watched his share of Pirates games before moving. He’s not great. He’s not awful. I think he’s just fine and about what you expect from a local broadcaster, and I imagine that, for better or worse, Pirates fans have much stronger opinions about him. That being said, his retirement marks the end of an era in Pittsburgh, and Pirates broadcasts are going to sound a bit different in 2020.