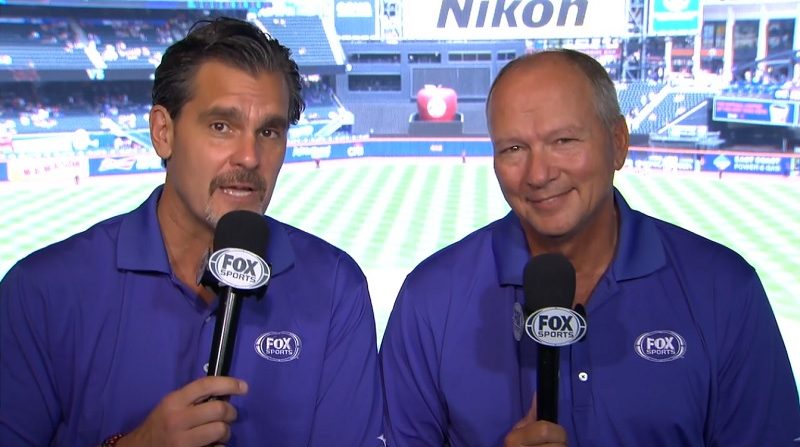 A change is happening in the Atlanta Braves TV booth – finally.

As first reported by the Atlanta Journal-Constitution, analyst Joe Simpson will have his TV workload dramatically slashed in 2019, down to “20 or 30 TV games,” with a much larger workload on radio (reportedly around 100 or so). Simpson will be replaced in the Braves booth by Jeff Francoeur, who is expected to work approximately 100 games this season. Tom Glavine will also work more games in 2019, and Chip Caray (sigh) remains the team’s play by play announcer.

“Absolutely not,” Genthner said when asked if the controversies contributed to the change. “To emphasize that point, we didn’t reprimand Joe, didn’t do anything to admonish him in any way (for the comments). … He’s a professional broadcaster, and he voiced his personal opinion about something, but not to the extent in any way, shape or form that it impacted his career in our point of view.”

Said Schiller: ”I think that’s just coincidence. … If we had any concerns about what he said, we wouldn’t be as comfortable as we are putting him on radio. Remember, he still is going to be a broadcaster for the Braves. If we had any reservations, any hesitations, about what Joe Simpson says into the microphone, he wouldn’t be doing the job we’ve asked him to do.”

Simpson himself seems surprised by the extent of the cutback, but did admit that he proposed scaling back his workload on television.

“I had proposed cutting back, but my proposal was a lot different than theirs,” Simpson said. “I was suggesting maybe cutting back to like 120 TV games, hoping to fill in the rest with some radio. But they’ve cut me back to 20 or 30 TV games with the rest being radio, so that came as a surprise.”

He then went on to talk about the “incidents” last year, which involved questioning the age of NL Rookie of the Year runner-up Juan Soto and criticizing the batting practice attire of Dodgers infielder Chase Utley.

Asked if he felt the incidents affected the decision, Simpson said: “I would sincerely hope not. … If that was not part of their decision-making process, then I am glad about that.

“I have a very strong protective instinct on the game and its customs and history and traditions, so my comments were only intended as a defensive mechanism of the game,” Simpson said. “… One of the things that I love most about the Atlanta Braves is how professional the organization is and how they expect their players to be professional, look professional, and that is something that I appreciate so much about the Atlanta Braves and have since I arrived in Atlanta (in 1992).”

Simpson was also not a part of TBS’s MLB Postseason coverage this year. The Braves broadcast crew finished 20th in our local MLB announcer rankings this summer, right in line where they’ve finished in recent years. He’s been a part of Braves broadcasts for nearly 30 years, working on TBS, Peachtree TV (remember Peachtree TV? Jaded Braves fans around in the late 2000s like myself do), Turner South (please don’t remind me of Turner South), and now, Fox Sports South, working with the late, legendary duo of Skip Caray and Pete Van Wieren, current TV partner Chip Caray, and former TV and future radio partner Don Sutton, among others.

On Braves radio, Simpson will work with Sutton, Ben Ingram, and Jim Powell on a rotating basis, and Simpson expects to call about 100 games on radio this season.

The real story here shouldn’t be Simpson’s demotion, but instead Francoeur’s demotion. The former Braves first round pick, who grew up in the Atlanta area, has received plenty of praise (including from myself, which is rare) for his work on radio and TV. Working with Caray, who has seemingly been mailing his work in for years, on a full-time basis could stifle his development, but that’s a risk the Braves were willing to take compared to the alternative of losing Francoeur to a competitor on either the local or national level.

“He’s really good, and if he we didn’t sign him he might not be available to us in two years,” Genthner said.

“All indicators are that he had an immediate and easy transition from the playing field to the broadcast booth,” Schiller said. “He’s a natural talent. We’re ready to begin the next phase of ushering in the next great broadcast talent, and he’s certainly ripe for that. It’s his time.”

Put me down as “cautiously optimistic” for the new Braves broadcasting tandem. They could have done a lot worse in replacing Simpson, and maybe working with a younger broadcaster like Francoeur will rejuvenate Caray, much like working with Tony Romo has rejuvenated Jim Nantz in the NFL on CBS booth.