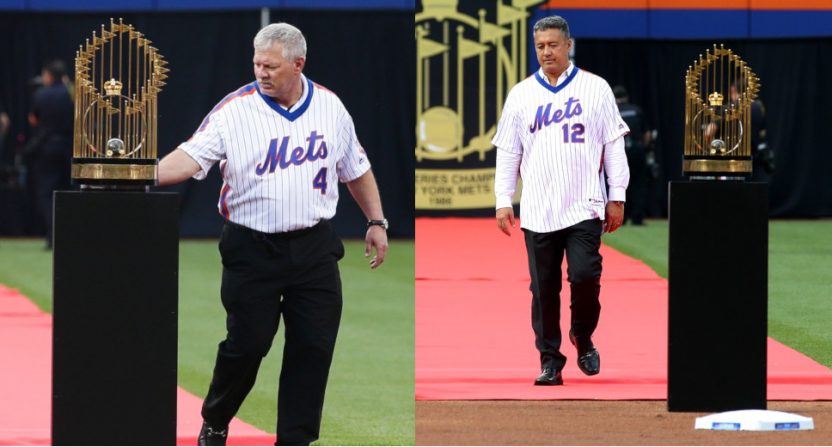 The 1986 Mets are in the news again, this time for a lawsuit between players on that World Series-winning team. Lenny Dykstra (seen at left above during a 2016 pre-game ceremony honoring that team), who played center field for the ’86 Mets, is suing Ron Darling after a new book from Darling (a star pitcher for that team who’s now a Mets analyst for SNY and a national analyst for Turner Sports, and who’s seen at right above at that same 2016 ceremony) accused Dykstra of hurling racist taunts at Boston Red Sox pitcher Dennis “Oil Can” Boyd during that World Series. The claims in question come from Darling’s new book “108 Stitches: Loose Threads, Ripping Yarns, and the Darndest Characters from My Time in the Game,” and they were published in an excerpt in The New York Post two weeks ago:

In Game 3 of the 1986 World Series, though, Oil Can was on the receiving end of the ugliest piece of vitriol I’ve ever heard — in a bar, on a baseball diamond … anywhere. It was right up there with one of the worst, most shameful moments I ever experienced in the game, and one of the great shames of the exchange was that I sat there with my teammates and didn’t do a damn thing about it. In fact, it resulted in a momentum shift that probably turned the Series around for us, and like most of the other guys on the bench, I stood and cheered at the positive outcome.

…The hero of Game 3 for us was also the a–hole of the game — Lenny Dykstra, one of baseball’s all-time thugs. You know how there always seems to be a guy in every organization, in every walk of life, who gets away with murder — murder being a figurative term in this case? That was Lenny. He was a criminal in every sense, although during his playing days his crimes were mostly of an interpersonal nature. He treated people like s–t, walked around like his s–t didn’t stink and was generally a s—-y human being — and, just maybe, the most confident, cocky player I would ever encounter. It was after he left the game, though, that his behavior took a truly criminal turn; he ended up being sentenced to house arrest on a bankruptcy fraud indictment, and he was also up on drug-possession and grand-theft-auto charges, for which he received a three-year prison sentence.

…Lenny was leading off for us that night, as he did most nights when he was in the lineup, and as Oil Can was taking his final warmups on the mound, Lenny was in the on-deck circle shouting every imaginable and unimaginable insult and expletive in his direction — foul, racist, hateful, hurtful stuff. I don’t want to be too specific here, because I don’t want to commemorate this dark, low moment in Mets history in that way, but I will say that it was the worst collection of taunts and insults I’d ever heard — worse, I’m betting, than anything Jackie Robinson might have heard, his first couple times around the league. Way worse than the Hollywood version of opposing players’ mistreatment of Jackie that was on display in “The Jackie Robinson Story.” Way worse than whatever Kevin Garnett had famously said to get under Carmelo Anthony’s skin the night Melo went looking for K.G. in the locker room after a Celtics-Knicks game in 2013.

And yet whatever Lenny shouted at Oil Can out there on the mound that night might have had the desired effect, because Dennis looked rattled. It’s amazing to me, looking back, that there’s no footage from the game revealing Lenny’s treachery. He was out there shouting this stream-of-unconscionable s–t in plain sight, in earshot of anyone in one of the front rows and certainly in range of the cameras and microphones that had been set up to record the game, but I guess the attention was elsewhere.

Dykstra filed a lawsuit over this in the Manhattan Supreme Court Tuesday, with that suit claiming Darling “maliciously portrayed Plaintiff as a racist, an irremovable stain and permanent cloud which will forever diminish Mr. Dykstra.” Dykstra and his lawyer told Kirsten Fleming, Priscilla DeGregory and Kate Sheehy of the Post Tuesday they contend Darling “literally made up a story“:

“This lawsuit sends a loud, clear message to anyone that you can’t just make up lies about people — he literally made up a story,’’ Dykstra fumed to The Post of Darling on Tuesday.

“You can’t do that when you have millions of people listening to you, like Mr. Perfect does as a broadcaster,’’ he said, referring to Darling’s current career as a TV baseball commentator.

Matthew Blit, the former centerfielder’s high-powered lawyer, added, “It’s pathetic — Darling and his co-defendants knew Lenny is down and intentionally, maliciously and unlawfully stuck a dagger of lies into his heart.”

If this lawsuit gets to trial, it may be interesting to see what the various personalities involved with that Mets-Red Sox series have to say in court, and to see if there is any video footage of what Dykstra did or didn’t say. Second baseman Wally Backman (who hit behind Dykstra in the lineup) told Long Island’s WGBB 1240 Monday “I was on deck with Lenny and I’ll leave it at this: I know he didn’t say that. He did not say that. That’s a fact,” and Dykstra’s suit claims other players (including Darryl Strawberry, Dwight Gooden and Kevin Mitchell) have said Darling’s story is false.

However, it’s also notable that Darling didn’t specifically spell out what he claims Dykstra said. “Did Dykstra say X?” is one thing, but “Did Dykstra say something ‘foul, racist, hateful and hurtful’?” is another question, and one where Dykstra and Darling could have different opinions over the same comment. And U.S. libel law could present some hurdles for Dykstra. For one, he’s not a public official, but he might well be a public figure (especially considering that he’s already written two books of his own, both of which touch on that 1986 World Series), which could mean the actual malice standard applies and he’d have to prove that Darling’s comments were made “with knowledge that it was false or with reckless disregard of whether it was false or not.” We’ll see what happens, but there could be some uphill challenges for Dykstra to prove that Darling knowingly made a false claim here.

This is also not the first lawsuit that Dykstra has filed or threatened. In 2016, he dropped an April 2014 lawsuit he filed alleging he was beaten by Los Angeles deputies in jail and in a hospital. In 2017, he threatened a defamation lawsuit against a woman who accused him of sexual harassment while they were both guests on Fox News; it’s unclear if he ever actually filed suit there. And last August, he filed a lawsuit against agency CAA, claiming he was stiffed on a docuseries about his life that was pitched to Amazon but not picked up. We’ll see where this latest one goes. But it’s certainly interesting to see Dykstra actually suing Darling over this book.