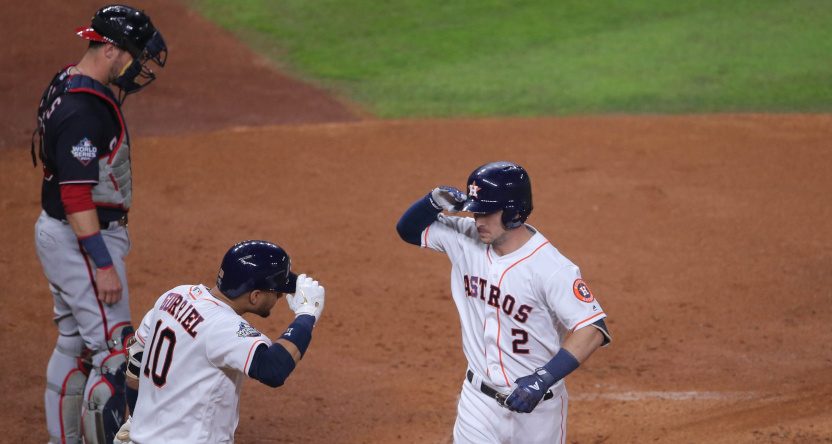 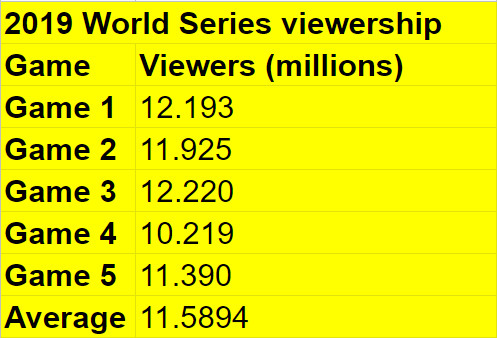 How did we get there? Well, here’s the game-by-game final viewership (found via Paulsen at Sports Media Watch) for 2019 so far (not including the higher parenthetical numbers that count streaming and Spanish-language broadcasts). Adding that and dividing by the five games played so far gives an average viewership of 11.589 million viewers (which the AP rounded to 11.6). You can see the game by-game viewership in the chart at right.

The Giants-Tigers series in 2012 only went four games, but if it had averaged 12.64 million viewers for six games, that would be a total viewership of 75.84 million (not unique viewers, as there are obviously people who watch multiple games). This series recorded a total viewership of 57.94 million through five games, so if it ends after Game 6, Game 6 would need 17.90 million viewers to reach that 75.84 million mark (which then can be divided by six to get the same average viewership as 2012). So Game 6 needs around 18 million viewers to make this series higher than 2012’s, if Game 6 proves to be the last game.

That kind of a jump is possible (elimination games tend to draw better), but not necessarily likely. The last two World Series that went at least six games were in 2016 and 2017; 2017 saw a Game 5 to Game 6 boost of 3.9 million viewers, while 2016 actually saw slightly less viewers for Game 6. Thus, this series would need a 6.6 million viewership boost from Game 5 to avoid least-watched status. (Of course, if this year’s series gets close and would be ahead if you roll in those streaming numbers, there’s an argument that it may not be “least-watched” anyway given the rising importance of streaming. But it needs to get close for those streaming numbers to be enough of a bump to matter.)

If the Nationals wind up winning Tuesday, though, the path to “not-least-watched” gets a little easier. If the 2012 series had gone seven games with an average of 12.64 million viewers per game, that would be a total viewership of 88.48 million. To get there, this series would need 30.54 million viewers across Games 6 and 7, so that’s around 15.27 million viewers for each of those games. And Game 7s tend to draw well, so it’s quite possible that it could get to that average even if Game 6 comes in below the 15.27 million mark. At any case, that’s yet one more reason for MLB and Fox to hope for a Game 7.