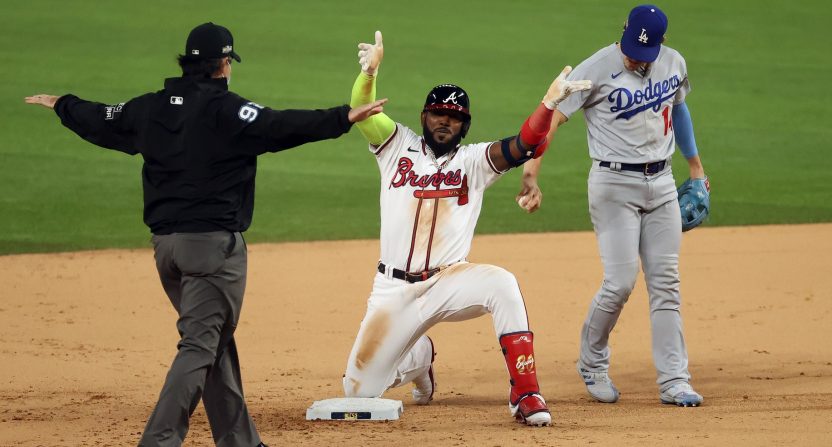 Despite competition from the two pre-election Town Halls, viewership for both the ALCS and NLCS held up on Thursday.

Game 5 of the Rays-Astros ALCS, punctuated by a walkoff homer by Houston’s Carlos Correa, drew 2.706 million viewers, down a tick from the 2.719 million viewers for Game 4. However, Game 4 aired in primetime, while Game 5 aired at 5 PM ET.

Game 4 of the Dodgers-Braves NLCS drew 5.039 million viewers while airing on both Fox and FS1, making it the most watched game of the 2020 MLB season. The previous high watermark was set for Monday’s Game 1 on Fox, which drew 4.202 million viewers. Game 3, airing on FS1 alone, drew just 2.094 million. However, like with the ALCS, the timeslots were swapped for Wednesday and Thursday’s games – Game 3 of the NLCS started at 6 PM ET, while Game 4 aired in primetime.

Overall, viewership for the nine LCS games so far is sitting at 2.81 million viewers. The record low average viewership for an LCS is 3.33 million for 2016’s Cleveland-Toronto matchup, and it’s conceivable that both of this year’s series will fall under that mark – especially with both games on Friday and Saturday (if we don’t get clinchers on Friday) airing on cable.

It would take something of a miracle for the ALCS to not knock off that Indians-Blue Jays series as the least-watched ever. Even if the series goes seven and the final two games each pull five million viewers, it would still not break the 3.33 million average. The NLCS also could fall short of that mark, especially if the Braves close the door on Friday.

With the LCS ending this weekend, we’ll be able to turn our attention to the World Series next week as MLB looks to avoid hitting the lows set by last year’s Nationals-Astros series. That matchup averaged 13.91 million viewers, and while it was “only” the third least-watched ever, the fact that it went seven games helped stemmed the overall horrific numbers. Games 2, 4, 5, and 7 were all the least-watched of their respective game ever, and the only two series that drew fewer viewers on average were 2012 (Giants-Tigers, 12.64 million for a four game sweep) and 2008 (Phillies-Rays, 13.19 million viewers for a five game series).