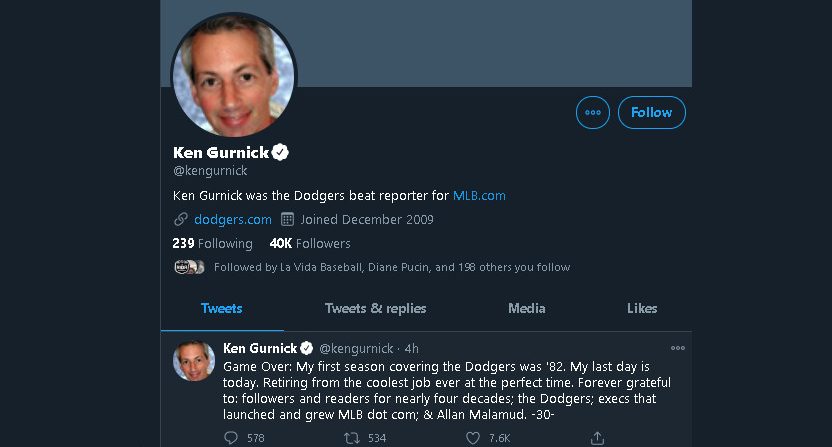 December 2020 has seen quite the exodus of long-tenured MLB.com writers, including T.R. Sullivan (Rangers), Greg Johns (Mariners), and Jeffrey Flanagan (Royals). The latest in that line is Ken Gurnick, who had been covering the Dodgers since 1982 and had been writing about them at MLB.com since 2001:

Game Over: My first season covering the Dodgers was '82. My last day is today. Retiring from the coolest job ever at the perfect time. Forever grateful to: followers and readers for nearly four decades; the Dodgers; execs that launched and grew MLB dot com; & Allan Malamud. -30-

Gurnick has long been a notable figure on the Dodgers’ beat, and he ‘s written books with Rick Monday and Steve Garvey. And it’s certainly significant to see this wider exit of long-tenured MLB.com writers. Ryan Thibodaux (who runs the Baseball Hall of Fame voter tracker) commented on that last week in terms of the change this has seen in MLB.com Hall of Fame voters (required by the Baseball Writers’ Association of America to have been an active BBWAA member for 10 years, and then allowed to continue voting for 10 years after their active membership).

For the 2014 voting cycle when I launched my version of the tracker, MLB dot com had 17 Hall of Fame voters on staff (https://t.co/s0C9QPR5TV). Next year it appears they will have three (plus another who no longer votes).

Gurnick was not one of the six MLB.com writers who voted for the Hall of Fame last year, so his departure doesn’t deplete that count (for the record, he declared in 2014 that he wouldn’t vote for the Hall of Fame again after backlash he received for voting for Jack Morris and no one else). But his exit does certainly further deplete the amount of beatwriting experience at MLB.com. And it’s definitely notable to see so many MLB.com fixtures all leaving in the same year.